Short Formats: Narrative Film. Hey, sorry for taking so long to come back and write down the last part of the Short Formats series. 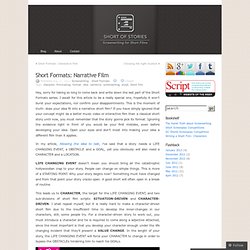 I await for this article to be a really special one, hopefully it won’t burst your expectations, nor confirm your disappointments. This is the moment of truth: does your idea fit into a narrative short film? If you have simply ignored that your concept might be a better music video or interactive film than a classical short story until now, you must remember that the story gonna pick its format. Ignoring the evidence right in front of you would be your first mistake, even before developing your idea. Open your eyes and don’t insist into making your idea a different film than it applies. In my article, Allowing the idea to talk, i’ve said that a story needs a LIFE CHANGING EVENT, a OBSTACLE and a GOAL, yet you obviously will also need a CHARACTER and a LOCATION.

LIFE CHANGING EVENT doesn’t mean you should bring all the catastrophic hollywoodian crap to your story. Short Formats: Narrative Film. Dramatic structure. History[edit] Freytag's analysis[edit] "Freytag's pyramid", symbolizing his theory of dramatic structure According to Freytag, a drama is divided into five parts, or acts,[5] which some refer to as a dramatic arc: exposition, rising action, climax, falling action, and dénouement. 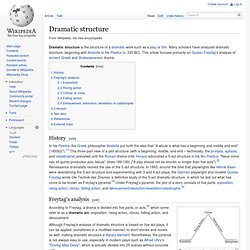 Dénouement, resolution, revelation or catastrophe[edit] The comedy ends with a dénouement (a conclusion), in which the protagonist is better off than at the story's outset. Criticism[edit] Freytag's analysis was intended to apply to ancient Greek and Shakespearean drama, not modern drama. Short Formats: Narrative Film. A Smart Script Primer for Short Films by Hollywood Story Consultant Julie Marsh - Polly Staffle - An Entertainment Website Specializing in Movie & DVD Reviews. 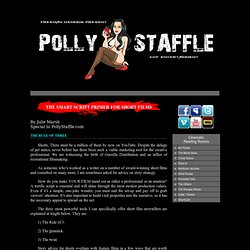 There must be a million of them by now on YouTube. Despite the deluge of pet antics, never before has there been such a viable marketing tool for the creative professional. We are witnessing the birth of Guerilla Distribution and an influx of recreational filmmaking. Online Now. Online Now. The social network // a Nepali short film [full HD with subtitle] Submissions London Short Film Festival. The London Short Film Festival is now open closed for submissions for its 11th Edition! 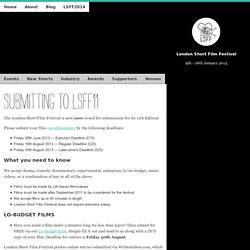 Please submit your film via withoutabox by the following deadlines: Friday 28th June 2013 — Earlybird Deadline (£15)Friday 16th August 2013 — Regular Deadline (£20)Friday 30th August 2013 — Latecomers Deadline (£25) What you need to know We accept drama, comedy, documentary, experimental, animation, lo/no-budget, music videos, or a combination of any or all of the above. Films must be made by UK based filmmakersFilms must be made after September 2011 to be considered for the festival.We accept films up to 45 minutes in lengthLondon Short Film Festival does not require premiere status. Blessing in Disguise. Tick Tock - short film by Ien Chi. Destiny - Animation Short. 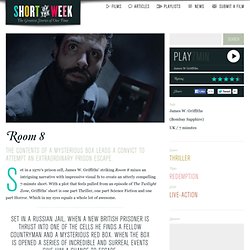 Griffiths’ striking Room 8 mixes an intriguing narrative with impressive visual fx to create an utterly compelling 7-minute short. With a plot that feels pulled from an episode of The Twilight Zone, Griffiths’ short is one part Thriller, one part Science Fiction and one part Horror. Which in my eyes equals a whole lot of awesome. Set in a Russian jail, when a new British prisoner is thrust into one of the cells he finds a fellow countryman and a mysterious red box. When the box is opened a series of incredible and surreal events give him a chance to escape.

Created as part of the Bombay Sapphire Imagination series, Room 8 is one of five handpicked films based on Oscar-winning screenwriter Geoffrey Fletcher’s (Precious) script. “Online film competitions are becoming more and more common, but the problem with most is that you must use your own resources to make the film first and then it gets judged.

View the rest of the Imagination Series. Short Film Directed by Anthony Deptula. Dating in Los Angeles is hard, especially when you have a crappy car. 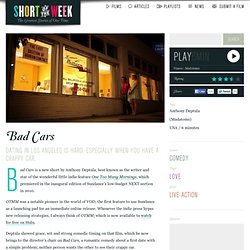 Bad Cars is a new short by Anthony Deptula, best known as the writer and star of the wonderful little indie feature One Too Many Mornings, which premiered in the inaugural edition of Sundance’s low-budget NEXT section in 2010. OTMM was a notable pioneer in the world of VOD; the first feature to use Sundance as a launching pad for an immediate online release. Whenever the indie press hypes new releasing strategies, I always think of OTMM, which is now available to watch for free on Hulu. Deptula showed grace, wit and strong comedic timing on that film, which he now brings to the director’s chair on Bad Cars, a romantic comedy about a first date with a simple problem; neither person wants the other to see their crappy car.