Dictionary of English slang and colloquialisms of the UK 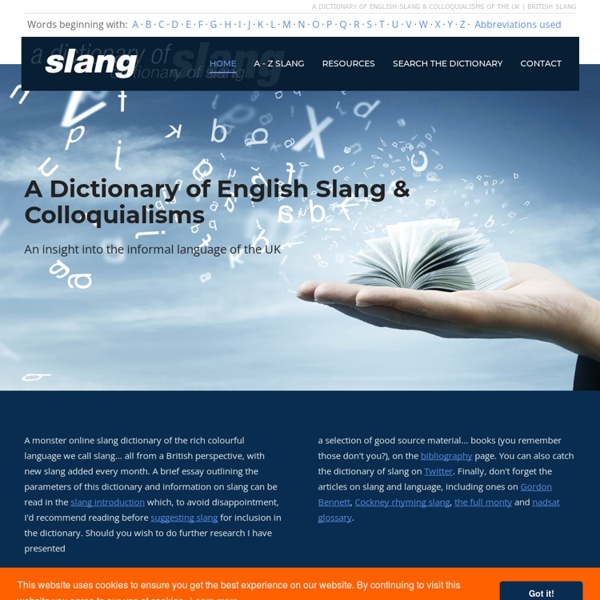 Foreign Language and ESL Games In fact, even acquiring basic level skills in one or several foreign languages is bound to have a sizable beneficial impact on one’s career and life in general. A great way to begin to learn a foreign language is through online games. Kids and adults alike love learning foreign words and phrases using fun matching games. Long before French scholar Champollion deciphered the three Rosetta Stone languages nearly 100 years ago, the advantages of learning a foreign language were clear. Indeed, foreign language learning statistics show that those who speak more than one language often have greater success in their careers. Foreign language education is therefore an important topic to tackle.

Hayo Reinders - Learner Autonomy, Self-Access Language Learning, and Applied Linguistics. Aagård, R. & St. John, O. (2003). Home and horizon. In K. van Esch & O. St. John (Eds.), A framework for freedom: Learner autonomy in foreign language teacher education (107-128). 30 Incorrectly Used Words That Can Make You Look Bad While I like to think I know a little about business writing, I often fall into a few word traps. For example, "who" and "whom." I rarely use "whom" when I should. Even when spell check suggests "whom," I think it sounds pretentious. So I don't use it.

time and dates We use phrases with prepositions as time adverbials: • We use at with: clock times: at seven o’clock - at nine thirty - at fifteen hundred hoursmealtimes: at breakfast - at lunchtime - at teatime IPA Tutorial Lesson One Just what is the International Phonetic Alphabet (or IPA)? I often use the IPA on this blog and a number of our accent training resources. You will see it used on countless other linguistics websites as well. If you have no idea what I’m talking about, take a look at this sample: 12 Horrible Gobbledygook Words We Reluctantly Accepted Just as there is nothing certain in this world but death and taxes, there is nothing certain in language but that it will change, and that people will react badly. One of the changes people find most offensive is the spread of professional jargon that has been coined to replace simpler, clearer words we already have. Anyone up for some collaborative incentivizing going forward?

5 weak words to avoid and what to use instead When I first began writing, I was unsure of myself. My sentences were filled with meaningless words and fillers. What I didn’t realize is that by using them I was sabotaging myself and my writing. Weak words can sneak into our writing anywhere, anytime and when they do, they destroy the power of our work. I’ve rounded up five weak words to avoid and some helpful tips for what you can use instead. For more tips on how to communicate clearly, whether you’re writing a tweet, post, or brief, click here to sign up for our weekly newsletter.

English Glossary of Grammar Terms A fully cross-referenced English glossary of linguistic and grammatical terms. Each grammar definition contains an explanation and cross-references to other relevant grammar terms. Usable for both native speakers interested in language and linguistics, and students of English as a second language (ESL, EFL, ESOL, and EAP)English grammar terms of all levels from beginner to advanced.