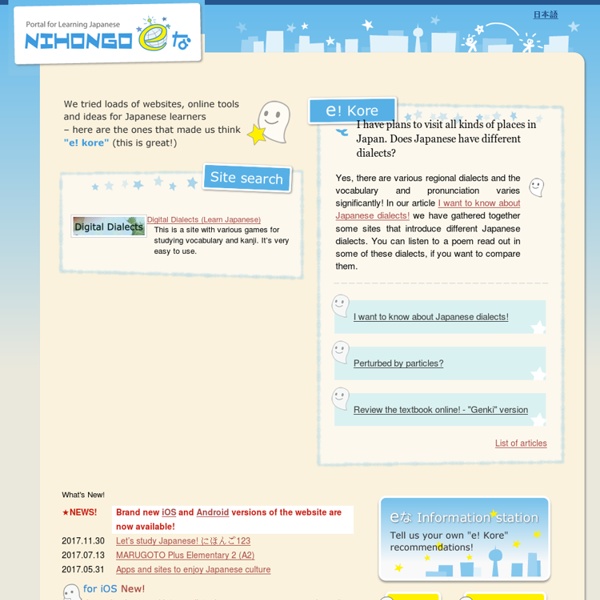 Japanese Lessons with Maggie Have Fun Learning Japanese With AKBINGO! I love AKBINGO! It’s one of my all time favorite Japanese variety shows, right on up there with Gaki no Tsukai. (P.S. if you haven’t already heard of Gaki no Tsukai, do yourself a huge favor and check that out as well.) Over the past century, we’ve written a few posts about the stars of AKBINGO!, AKB48, and how they’ve taken over Japan, seduced China, made babies over the internet, and played God. While not for everyone, AKB48 is still insanely popular. Lesser known (I think) is the band’s variety show, AKBINGO! AKBINGO! [yframe url=' I’ve included a few videos with English subs for those who aren’t as far along in their Japanese studies, but these videos will give you a good feel for the show. [yframe url=' Since this is a variety show, the cast members speak much faster and sometimes even talk over one another. [yframe url=' [yframe url=' Like I mentioned before, AKBINGO!

The Surprisingly Simple Logic Behind Japanese Sentence Structure - 80/20 Japanese Most people find Japanese sentence structure to be difficult and confusing. This is completely understandable considering how fundamentally different it is to other languages, but the truth is that Japanese grammar is actually incredibly logical – it just needs to be looked at from the right angle. In simple terms, Japanese sentences are structured as follows: the verb describing an action goes at the end of the sentence, and any other information related to that action (like people, places and things) goes before the verb. Particles, which are like little helper words, are then attached to each of these additional pieces of information to tell us how that information relates to the action. For example, a particle will tell us if the word before it is the person doing the action, the thing the action is done to, the location where it is done, or something else. Let’s get to it! ContentsBasic “desu”「です」 sentencesHow particles workDefining different rolesExpanding individual elements はです。 はです。

Quick Kanji - Language Here you will learn kanji, the characters that are used in Japanese together with hiragana and katakana. Many kanji are made up of pictures drawn by people. If you click on the pictures below, the kanji with the same meaning as the picture will appear. Can you find all the kanji hidden in the picture? The kanji you can see here are among those learned by first- and second-year Japanese elementary school students. You'll need the Flash plugin before you can start.

★みちゅ★の子育てｵｼｬﾚ日記 長男がハマり中なゾロリ 私も 一緒に読んだんですが面白い♪( ´▽｀)♪( ´▽｀) アニメもあったので 長男釘付け（≧∇≦）（≧∇≦） 今日は 自転車遊びもしたよー(=´∀｀)人(´∀｀=) 小学校になってから 前よりも早起き 慣れない電車通学ですが 頑張ってくれてます(=´∀｀)人(´∀｀=) iPhoneからの投稿 Gakuu - Real Japanese SPECTRUM NEXUS · Features · Mangajin · Learn Japanese Through Manga! What is Mangajin? Mangajin was created in the early 90's as a monthly English publication for students of the Japanese language. Unlike most text books that focused solely on teaching people Japanese through boring text, Mangajin was different in that it focused on showing readers a page of manga and then a page of English translations. View Mangajin Online Japanese Language As a native English speaker, there are very few languages as intimidating to learn as Japanese. After all, many young people interested in the Japanese language are interested because of their obsession with Japanese anime and manga. The benefits of learning Japanese are extremely useful.

The JLPT Study Page How I learned a language in 22 hours "What do you know about where I come from?" That was one of the first questions I ever asked Bosco Mongousso, an Mbendjele pygmy who lives in the sparsely populated Ndoki forest at the far northern tip of the Republic of Congo. We were sitting on logs around a fire one evening four years ago, eating a dinner of smoked river fish and koko, a vitamin-rich wild green harvested from the forest. Mongousso, who makes his living, for the most part, by hunting wildlife and gathering forest produce such as nuts, fruits, mushrooms and leaves, had teeth that had been chiselled to sharp points as a child. "I don't know. "Have you ever heard of the United States of America?" He shook his head. I didn't know where to begin. "What did he say?" "He wanted to know, 'What's the ocean?'" As part of my research, I had begun planning a series of logistically complicated trips that would take me back to the same remote region where I had met Mongousso. I have never been particularly good with languages.