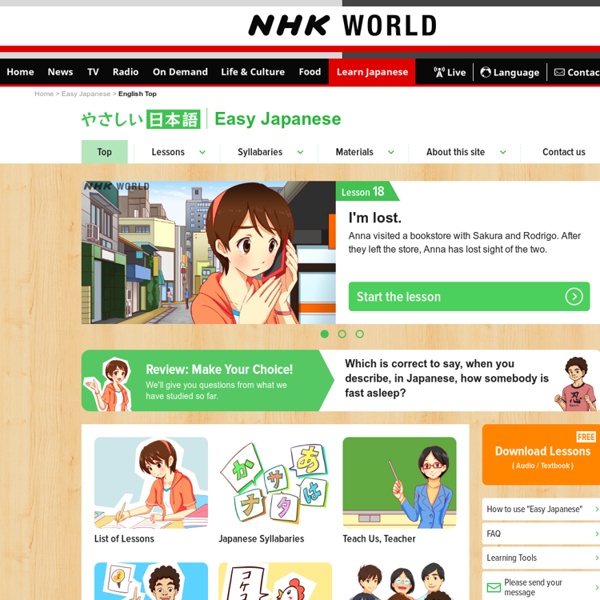 Japanese Grammar Guide This guide was created as a resource for those who want to learn Japanese grammar in a rational, intuitive way that makes sense in Japanese. The explanations are focused on how to make sense of the grammar not from English but from a Japanese point of view. Before you begin If your computer is not setup to display Japanese, you’ll want to enable Japanese support to read the Japanese text. Other formats Paperback – Available on Amazon.PDF Version – Philipp Kerling wrote an awesome script to convert the site to PDF.iOS app – The guide is now available for iOS devices created by Adam Critchley.Android app – The guide is now available on Google Play created by Ignatius Reza Lesmana. This work is released under a Creative Commons Attribution-Noncommercial-Share Alike License. The problem with conventional textbooks The problem with conventional textbooks is that they often have the following goals. A Japanese guide to learning Japanese grammar Suggestions

Tumbleweed's Resources for Learning Japanese Okay, here's a familiar scenario... For whatever reason, you've taken up the study of the Japanese language. You've gone through a couple of the beginner's level books, you've run through a couple of basic tutorial programs, you've even taken a couple of classes someplace. Then you decide to try out your new knowledge. You try talking to native speakers, you try to watch an unsubtitled movie or read a magazine. My sympathies, truly. It's still a learnable language! I've collected here some tips and tricks to improving your Japanese. Tumbleweed's Tips and Tricks. The Quick and Dirty Guide to Japanese by Tad Perry How to Understand a Japanese Sentence by Ken Butler Particles vs. Japanese on the Computer Studying Japanese also means being a bit of a linguist. Origin of -masu Form by muchan Origin of the Japanese Language and People by muchan But how can you understand a language if you don't understand the people? Tumbleweed's Japanese Bookshelf Japanese Language Links Japanese Media Sources

Japanese Cheat Sheet After 2 months of planning and composition (okay, so I did procrastinate quite a bit), I now understand how Moses felt when he descended Mount Sinai with the holy tablets. Behold, Nihonshock’s newly revised and much improved Japanese cheat sheet! This is a “cheat sheet” for the Japanese language. How do I use it? The intended use of this document is for you to download it, print it on two sides of one sheet of paper and keep it wherever you need it (in your Japanese textbook, on your desk, in your pocket, etc). It’s possible to keep the cheat sheet on your computer, but it won’t be anywhere near as handy or portable as a printed version, and you’ll need to do quite a bit of scrolling and zooming because of the small font size. What information is inside? Page 1 Page 2 Who is this for? This document will be most useful for beginner to intermediate Japanese learners. Why are there four versions? What this document is NOT Nor is this document a comprehensive overview of Japanese language.

Learn Kanji Using Radicals | KANJIDAMAGE mozdev.org - kanjilish: index 100 top resources to learn Japanese 741 Flares6250116×741 Flares We find ourselves often giving recommendations of products to learn Japanese with, and we thought it’d be useful to compile a list for your reference. We have included a number of our own products, only where we are convinced that they are deserving of their place in the list, and we have included paid and free study resources without discrimination. The list is broken up by category and each item is clearly marked as to what JLPT level it targets. Everything on this list deserves your attention, but resources we’re particularly fond of, the kind we’d use ourselves, are additionally marked with a little star. Japanese textbooks Our very own textbook. Probably the most popular Japanese textbook, published by The Japan Times, is well worth its reputation. You can think of this textbook as Genki III. Another good intermediate-advanced textbook. Our free 14-day hiragana & katakana course. As long as you get the kana-version, this can be a pretty good textbook. Print

Japanese Grammar> Avoid using anata whenever possible, and use the person's name with san instead. Similarly, when referring to a third person, use the person's name. The negative indefinite pronouns take a negative verb. The one reflexive pronoun is jibun (myself, yourself, etc.). There are no relative pronouns in Japanese, and the relative clause precedes the word it modifies. The demonstrative and iterrogative words, which are either pronouns, adjectives or adverbs, may be divided into four groups depending on the prefix: dare who nan, nani what nannin how many peopleikura how muchikutsu how manyitsu whendôshite why Particles wa Topic Yôko san wa daigakuin no gakusei desu. ga Subject Watashi wa sushi ga suki desu. o Direct object Torako wa kasasagi o mite imasu. no Possession, noun modification, apposition Simon wa musume no neko desu. ni object, location, direction, specific time Watashi wa Tanaka san ni hon o kasimashita. de Place of action, means, total, material e Direction Nihon e ikimasu ka. ga but

AJATT: All Japanese All The Time