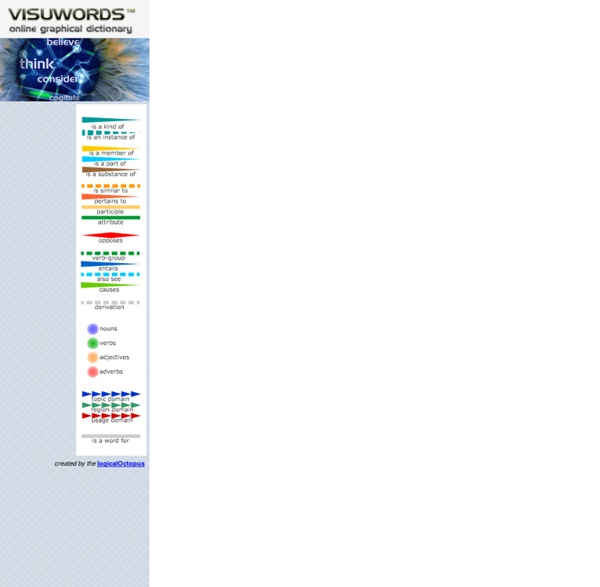 Visuwords™ online graphical dictionary — Look up words to find their meanings and associations with other words and concepts. Produce diagrams reminiscent of a neural net. Learn how words associate. Enter words into the search box to look them up or double-click a node to expand the tree. Click and drag the background to pan around and use the mouse wheel to zoom. Hover over nodes to see the definition and click and drag individual nodes to move them around to help clarify connections. It's a dictionary! Visuwords™ uses Princeton University’s WordNet, an opensource database built by University students and language researchers. The Visuwords™ Interface To use the applet you only need to type a word into the search query at the top of the page and press 'Enter'. You can zoom the model in and out by rolling the wheel on your mouse.

Word Root Of The Day Archive « Previous1234Next » #120 Dec 01, 15 ego The Latin root word ego means “I.” 25 BEST WEBSITES FOR LEARNING ENGLISH I want the new e-book! How do you learn English in your free time? Do you meet internationals in cafés, do you self-study using books, do you get on the internet? When it comes to learning many people have realized they are not going to acquire the language just by sitting in classrooms. The Giant List of Power & Trigger Words for Sales Wouldn’t it be cool to have a giant list of trigger words to jog your brain when writing copy? Wait….someone already made one and it’s posted right below here?? Cool! Just skim through this list when writing copy, it’ll give you ideas…. People like to feel they belong.

Create paintings from photos Did you ever wanted to be a great artist? But unfortunately you are really bad at it? Well that's ok because now with Psykopaint you can be a great artist with no skills. But how does it work? Open a photo you like and paint it using a variety of tools like brush, spraycan, ribbon, knife, Psykopaint will choose the colors automatically for you So you don't need to worry about it and focus on a style you like. Impressionist, cubist, abtract or classic, or something totally unique. peace peace n. harmonious relations; freedom from disputes; "the roommates lived in peace together" n. the state prevailing during the absence of war Language Arts Games - Grammar, Punctuation, Capitalization, Vocabulary Sheppard Software's Language Arts page features a variety of games for different grade levels. Elementary students (and anyone who needs a refresher) can play the animated grammar and punctuation games, which review basic punctuation and grammar concepts. This section is continually being refined and expanded, so check back often!

happy English is a West Germanic language that was first spoken in early medieval England and is now a global lingua franca. Named after the Angles, one of the Germanic tribes that migrated to the area of Britain that would later take their name, England, both names ultimately deriving from the Anglia peninsula in the Baltic Sea. It is closely related to the Frisian languages, but its vocabulary has been significantly influenced by other Germanic languages, particularly Norse (a North Germanic language), as well as by Latin and French.[6] English has developed over the course of more than 1,400 years. The earliest forms of English, a set of Anglo-Frisian dialects brought to Great Britain by Anglo-Saxon settlers in the 5th century, are called Old English.

9 Foreign Terms More Awful Than Any English Profanity The great thing about language is that it reveals so much about the speaker. Especially when we're talking about slang -- the fact that every gamer knows what "teabagging" is speaks volumes. That's why two times before we've come up with lists of foreign slang words the English language desperately needs -- some words you hear and think, "That could only have come from ____." But then there's the flip side -- some languages have words for concepts so weird or off-putting that we can thank the stars we don't have any use for them in everyday English. For example ... #9.

Pausing up-down Scroller Note: Updated March 16th, 06'. Fixed padding issue so right padding is correctly applied to the scroller. Description: As its name suggests, this is a up-down scroller that pauses between each message! The look of the scroller is completely styled using external CSS, including the dimensions. Easily create a single line scroller just by adjusting the scroller's height appropriately! definition of etiology by Medical dictionary etiology [e″te-ol´ah-je] thesciencedealingwithcauses of disease.adj.,adjetiolog´ic,etiolog´ical. Etiology classification of disease.

proverbs TRADITIONAL PROVERBS: A barking dog never bites. A bird in the hand is worth two in the bush A fool and his money are soon parted. A friend in need is a friend indeed. A new broom sweeps clean. A nod's as good as a wink to a blind man. (e.g., it doesn't make any difference what you do -- they don't know!)

Fun stuff from all around the web Fun stuff from all around the web: videos, adds, activities, games and just anything crazy or bizarre to put a smile on your face. All in English, of course! What would you do with an extra day? Love Greetings Smilebox knows that sometimes romance simply must be conveyed immediately, just because. And that every now and then, a devoted grandmother across the country needs to hear from her biggest little fans—and see their smiling faces. For all the ways love needs to be shared, Smilebox helps you send personal greetings from the heart. And nothing could be sweeter. At Smilebox we believe that how you share your photos should be as memorable as the photos themselves.

ABC-CLIO > ODLIS > odlis_A In classification, one of the distinguishing characteristics of a class, identified as a means of differentiating it from other classes. As defined in FRBR (Functional Requirements for Bibliographic Records), one of a set of characteristics enabling users of information to formulate queries and evaluate responses when searching for information about a specific entity. Attributes can be inherent in the entity (physical characteristics, labeling information, etc.) or supplied by an external agent (assigned identifiers, contextual information, etc.). For example, the logical attributes of a creative work include its title, form, date of creation, intended audience, etc. As a general rule, a given instance of an entity exhibits a single value for each attribute, but multiple values are possible (a work may be published under more than one title or in more than one form), or a value may change over time (date of publication for serials).