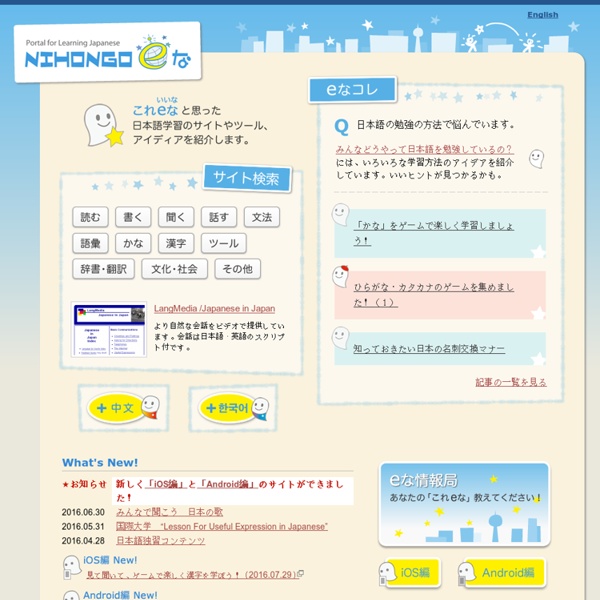 Japanese grammar Some distinctive aspects of modern Japanese sentence structure[edit] Word order: head final and left branching[edit] The modern theory of constituent order ("word order"), usually attributed to Joseph Greenberg, identifies several kinds of phrase. Each one has a head and possibly a modifier. The Japan Foundation, London - News These are some of the Japanese taster sessions that our volunteers in the Japanese Tasters for Schools (JTS) Programme have held in schools around the UK this year so far. We would like to thank all the volunteers for their extremely hard work on the programme! If you would like to arrange a Japanese Taster Session at your school, or if you speak good Japanese and you would like to become a JTS volunteer yourself, click here to find out more about the JTS Programme. Longsands Academy, July 15th 2016 Secondary Academy Converter in Cambridgeshire Aims of taster: Part of the school Arts Week with a focus on Internationalism Activities in taster: Japanese numbers, Japanese greetings, writing names in Japanese Feedback: "[The volunteer] was extremely helpful on the day and interacted really well with our students. We are very grateful to her for coming to deliver such a varied session covering aspects of Japanese language and culture which engaged our students."

Japanese Reading Practice For Beginners Of course, there are plenty of resource out there to help intermediate and advanced learners of Japanese to practice their reading. They can use any Japanese book, manga, blog, or website and study away to their heart’s content. For beginners, though, finding Japanese things to read that are at or around your level is a pain. Either you study what’s in your textbook (limited and often times boring) or you don’t get to study reading it much at all.

Japanese "adjectives" [Back to the main Japanese page] Why do I write "adjectives" in quotes for this chapter? Because your mind has a preset idea of what an adjective is-- based on how English uses words called adjectives to modify nouns-- and the Japanese adjective is not quite the same. It is indeed a class of words that modifies nouns, but it does so in a different way than the corresponding class in English.

8 Great Free Apps for Studying Japanese Smartphones. Almost a necessity in modern life – and a divisive one at that. With constant notifications, we are so easily dragged out of present surroundings and into that welcoming pixelated glow. 35 widely unknown Japanese internet slang terms This recent ranking survey from goo Ranking was quite an effort to translate, a look at current net slang that are not yet widely known. Here is a related survey from a couple of years ago. Demographics Over the 5th and 6th of October 2012 1,064 members of the goo Research monitor group completed a private internet-based questionnaire. 58.2% of the sample were female, 10.5% in their teens, 13.7% in their twenties, 26.6% in their thirties, 27.6% in their forties, 11.7% in their fifties, and 9.9% aged sixty or older. Note that the score in the results refers to the relative number of votes for each option, not a percentage of the total sample. Number 16 was the first one I knew, having seen it used and explained on TV just last week!

Principles of L2 Teaching Methods and Approaches This module provides a description of the basic principles and procedures of the most recognized and commonly used approaches and methods for teaching a second or foreign language. Each approach or method has an articulated theoretical orientation and a collection of strategies and learning activities designed to reach the specified goals and achieve the learning outcomes of the teaching and learning processes. Jill Kerper Mora The following approaches and methods are described below:

Best Android apps to learn Japanese A couple of months ago, I bought a new Android smartphone. When I started looking for apps to install on it, I thought about what I wanted my phone to do for me, turning to the wide selection of Japanese apps to help my studies. iPhone user? Check out our list of best iPhone Japanese learning apps