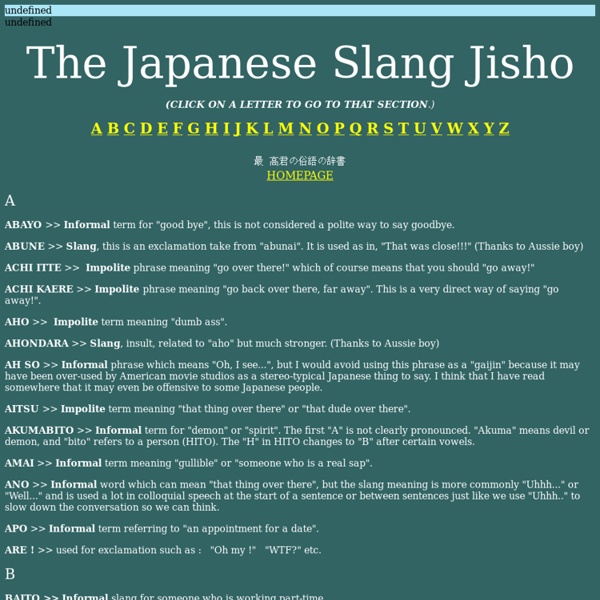 Use Twitter To Improve Your Japanese The internet has made many things in our lives so much easier and learning languages is definitely one of those. It doesn’t make the actual learning part easier, of course ^_^, but it does make the learning materials much simpler (and cheaper) to access and as such the excuses for not learning get harder to find. Oddly enough, Twitter, the social behemoth, is one such learning resource. The ubiquity of Twitter, via a strong mobile and desktop presence and a ton of third party apps, means you can connect to the Twitterverse in so many different ways. I access Twitter via Tweetdeck and Tweetie on my iPhone and then through the browser and Tweetie’s desktop client when I’m back at home – simple and always convenient. Having the ability to always connect to Twitter on the run means you essentially have a free Japanese resource available to you at any time and wherever you happen be. So how do I actually learn Japanese from Twitter? Follow Japanese Learning Tweeters Follow Japanese Tweeters

Japanese dictionary <div class="alertmsg"> ご利用のブラウザは JavaScript が無効に設定されています。<br />お手数ですが、ブラウザの JavaScript を有効にして再度アクセスしてください。 </div> ＊ データの転載は禁じられています。 スポンサーサイト検索 Free Visual Dictionary & Thesaurus | Online Dictionary | Associated Words | Synonyms Dictionary at SnappyWords.com It’s an online interactive English dictionary and thesaurus that helps you find the meanings of words and draw connections to associated words. You can easily see the meaning of each by simply placing the mouse cursor over it. Why use Snappy Words visual dictionary? Easy to use dictionary and thesaurus. Learn how words associate in a visually interactive display. How do I use it? Type words in the search box and click Go or simply hit Enter. Place the mouse cursor over a word to view the meaning. What dictionary does Snappy Words use? The Snappy Words interface queries the WordNet lexical database developed by Princeton University and made available for students and language researchers. Useful Sites Another fun, free and interactive education application is the Madison Falls High School course which covers core high school subjects.

AJATT: All Japanese All The Time Maggie Sensei 日本文化いろは事典 | 胸はって、ニッポン人！ CAUSATIVE AND PASSIVE Posted by Tae Kim We will now learn the last two major types of verb conjugations: causative and passive forms. These two verb conjugations are traditionally covered together because of the notorious causative-passive combination. We will now go over what all these things are and how they are used. Causative Verbs Vocabulary Verbs conjugated into the causative form are used to indicate an action that someone makes happen. 全部食べさせた。 Causative Conjugation Rules Here are the conjugation rules for the causative form. Examples Here are some examples using the causative verb. 先生が学生に宿題をたくさんさせた。 When asking for permission to let someone do something, it is more common to use the 「～てもいい」 grammar. トイレに行かせてくれますか。 A Shorter Alternative There is a shorter version of the causative conjugation, which I will go over for completeness. The key difference in this version is that all verbs become an u-verbs with a 「す」 ending. 同じことを何回も言わすな！ Passive Verbs Passive Conjugation Rules All passive verbs become ru-verbs.

Backlash against Miyazaki is generational If you haven’t lived in Japan, it’s hard to appreciate just how beloved are anime maestro Hayao Miyazaki and his creative hub, Studio Ghibli. Annual surveys of Japanese consumers often find that Ghibli is their favorite domestic brand, ahead of stalwarts such as Toyota and Sony. Miyazaki’s animated epics regularly top the domestic theatrical market. “Kaze Tachinu” (“The Wind Rises”), his latest film — loosely based on the life of engineer Jiro Horikoshi, designer of Japan’s wartime Zero fighter plane — soared above its box office rivals for seven consecutive weeks after its July release. Meanwhile, his Oscar-winning “Spirited Away” (2001) remains the top-grossing film in Japanese history, knocking aside Hollywood live-action contenders such as “Titanic” and the “Harry Potter” films. But the rest of the world has been catching up. But the reaction to Ghibli’s anti-war, anti-revisionist essays was ferocious, especially among Japan’s so-called netto uyoku, or right-wing Internet users.

Japanese grammar Some distinctive aspects of modern Japanese sentence structure[edit] Word order: head final and left branching[edit] The modern theory of constituent order ("word order"), usually attributed to Joseph Greenberg, identifies several kinds of phrase. genitive phrase, i.e., noun modified by another noun ("the cover of the book", "the book's cover");noun governed by an adposition ("on the table", "underneath the table");comparison ("[X is] bigger than Y", i.e., "compared to Y, X is big").noun modified by an adjective ("black cat"). Some languages are inconsistent in constituent order, having a mixture of head initial phrase types and head final phrase types. genitive phrase: neko no iro, cat GEN color = "the cat's (neko no) color (iro)";noun governed by an adposition: nihon ni, Japan in = "in Japan";comparison: Y yori ookii, Y than big = "bigger than Y";noun modified by an adjective: kuroi neko = "black cat". Head finality prevails also when sentences are coordinated instead of subordinated.

Good beginner manga to read? I'm loving "Yotsuba," and I'm pretty newbish. In fact, ems573, we may be around the same general level. I finished RTK1 a few weeks ago, and I've been doing smart.fm (through Step 4) and anki lists (JLPT3 and 4) since. I am pleasantly surprised that I can read Yotsuba pretty well. I still need the help of a dictionary, but there are times when I can read 2-3 pages in a row before I need to look up a word. Interestingly, I found the very first chapter was the hardest of all. I'd also recommend "Japanese the Manga Way," if you haven't tried it yet.

ばか！バカ！ 馬鹿ー月！ • View topic - Japanese Onomatopoeia Guide (Audio Description) Macko Darlack wrote:and if it were to be in kanas... how would it be organized?? yet, i cannot imagine how to look up a word there!! We'll need help with that, [how do japanese look up a word in the dictionary, i wonder ][/color] They have their own 'arrangements of ABC' in their own language. Those voiced sounds (with dakuten/handakuten eg: ga, ji, po...) are after the unvoiced ('original') sounds. And when it comes to youon (rya, kyo, pyu...... combinations with small ya/yo/yu), they come after the ones with the big characters. And katakana comes after the hiragana words, eg: onyomi おにょみ (音読み） comes before onrain (オンライン) [online] Whether or not you use this system or our ABC system is up to you. Shadow, try learning those characters let's say...5 a day? "Their faces looked like this: Each of the four had the face of a man, and on the right side each had the face of a lion, and on the left the face of an ox; each also had the face of an eagle."

Light Novels vs Manga reading difficulty? I'm going to recommend that you jump into whatever you want to first. Don't worry about the difficulty - if it is something that you really want to read, you will read it. For decided what kind of Japanese to immerse yourself in, don't follow the i+1 idea. This will definitely lead you down... well, an impossible path. 1) Read 2) If you come across a word you don't understand look it up 2a) Is this word really awesome? 3) Alternative to 2): You come across a word you don't know 3a) Look it up 3b) Move on 4) Grammar you don't know: Try to find it in the grammar dictionaries or on JGram 4a) Can't find it: Guess 5) A sentence you COMPLETELY don't understand AT ALL 5a) SKIP IT! This is what I suggest. Here's an personal anecdote from my time as a beginning: I tried doing the sentence thing. Oh wait, let's just read it. Now, I still haven't finished 十二国記 to this day, though I recently restarted reading it (much easier now!) So, go have some fun and good luck!