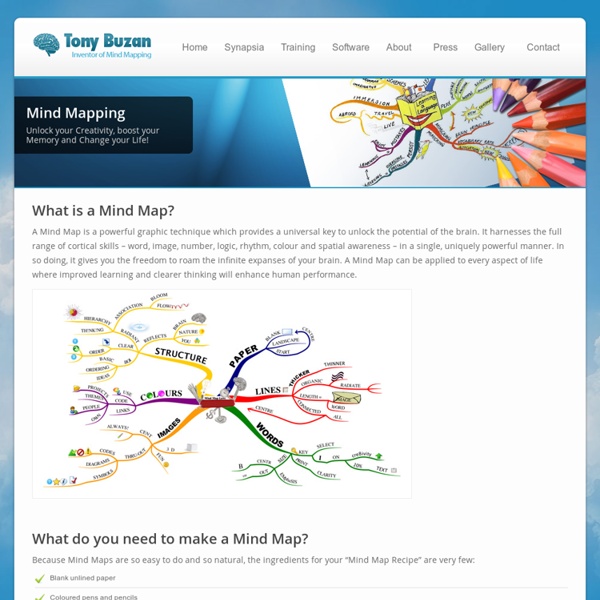 What is a Mind Map? A Mind Map is a powerful graphic technique which provides a universal key to unlock the potential of the brain. It harnesses the full range of cortical skills – word, image, number, logic, rhythm, colour and spatial awareness – in a single, uniquely powerful manner. In so doing, it gives you the freedom to roam the infinite expanses of your brain. A Mind Map can be applied to every aspect of life where improved learning and clearer thinking will enhance human performance. What do you need to make a Mind Map? Because Mind Maps are so easy to do and so natural, the ingredients for your “Mind Map Recipe” are very few: Blank unlined paperColoured pens and pencilsYour BrainYour imagination! When you use Mind Maps on a daily basis, you will find that your life becomes more productive, fulfilled, and successful on every level. 7 Steps to Making a Mind Map Start in the CENTRE of a blank page turned sideways. iMindMap – our recommended Mind Mapping software Learn more

Increases in internet use linked to a loss of religious affiliation, study finds People who surf the internet more often are more likely to be religiously unaffiliated, according to new research published in the Journal for the Scientific Study of Religion. The percentage of Americans who do not identify with a religious group has been growing — and the new research suggests that the internet could be playing a role. “In my own life, I’ve noticed the drastic impact that technology from the past 20 years has had on our social lives, so I started wondering, how might the internet influence religious beliefs, practices, and institutions?” said study author Paul K. McClure of Baylor University. iMindMap 7 “The latest version is mind blowing, with fantastic, easy to use features that place it streets ahead of any competition.” Noel Hawkes, Key Account Manager, Zeelandia Try it FreeSpecial Offer Buy it now We are all about creativity and that’s why we have focused on making an even more flexible and intuitive creative space that lets you capture your ideas without interruption or restriction. iMindMap 7 is more than Mind Mapping software; it shapes and styles itself to be whatever you need – your virtual piece of paper. So what’s new in iMindMap 7?

The Seeker Archetype: The Path of the Brave Wanderer “The journey of a thousand miles begins with a single step.” ~ Lao Tzu Though the Seeker is invariably one who geographically covers a fair few kilometers, they are defined by their thirst for knowledge and smashing the mold that has been set for them by their parents and peers. Held up at libraries, much like the Academic, Scribe or Writer Archetype who pours over ancient texts in the hope they might come across some transformative treasure or alchemic recipe to bring them closer to God. The Seeker is unstoppable in their desire to grow. “Not all those who wander are lost.” ~ J.R. Tolkien

Mind Maps - Mind Mapping Training from MindTools A Powerful Approach to Note-Taking (Also known as Mind Mapping, Concept Mapping, Spray Diagrams, and Spider Diagrams) "Mind Map" is a trademark of the Buzan Organization (see www.buzan.com). Quantum Computing Comes Closer, Thanks to a New Qubit Quantum Circuit In Brief Russian scientists at the MIST have designed a two-qubit circuit, an upgrade to the single qubit circuit they developed last year. The new development puts Russia in the leading edge of quantum computing research. The Space Nation Preamble We, the people of planet Earth, irrespective of our place of birth, residence, language, gender, race, nationality, religion or citizenship of the existing Earth states, use our free choice, will and conviction, in the desire to: unite the future humanity as transethnic, transnational, transreligious, ethical, fair, peaceful, looking into the infinite Universe, based on equality and dignity of every human being; resolve differences, conflicts, inequality and imperfections in human history, bring spiritual and scientific practices and human creative achievements to a new level in all their civilizational and cultural multitude, and launch a new era in the history of space humanity;

This animation shows what Earth would look like if all the ice melted Earlier this week, NASA revealed that Earth's oceans are rising faster than expected, and the space agency projected that we're now "locked in" to at least 90 cm of sea level rise in the coming decades. That in itself would be enough to displace millions of people around the world, but if this trend continues and all our polar ice caps and glaciers melt, it's been predicted that the oceans will rise by a mind-blowing 65.8 metres (216 feet). So where will all that water end up? The Business Insider video team has created this animated map to take us on a virtual tour of what all the continents would look like without any ice, and we have to admit it's kind of terrifying. Some of the areas that go under first are probably unsurprising - low-lying islands and already water-logged cities such as Venice are quick to disappear. And at first glance, the planet doesn't really look that much different.

Quantum entanglement Quantum entanglement is a physical phenomenon that occurs when pairs or groups of particles are generated or interact in ways such that the quantum state of each particle cannot be described independently – instead, a quantum state may be given for the system as a whole. Such phenomena were the subject of a 1935 paper by Albert Einstein, Boris Podolsky and Nathan Rosen,[1] describing what came to be known as the EPR paradox, and several papers by Erwin Schrödinger shortly thereafter.[2][3] Einstein and others considered such behavior to be impossible, as it violated the local realist view of causality (Einstein referred to it as "spooky action at a distance"),[4] and argued that the accepted formulation of quantum mechanics must therefore be incomplete. History[edit] However, they did not coin the word entanglement, nor did they generalize the special properties of the state they considered.

Intellectual Takeout What we observe with our eyes is real. Humans base much of their conception of reality on this basic principle. But what if we're wrong? What if what we’re seeing is what we need to believe rather than what really is? According to Donald Hoffman, a professor of cognitive science at the University of California, what we perceive as reality is more like an evolutionary illusion.