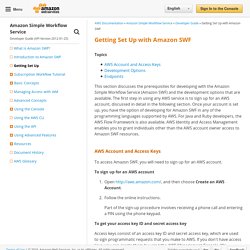 AWS Flow Framework samples for Amazon SWF : Sample Code & Libraries. Community Contributed Software Amazon Web Services provides links to these packages as a convenience for our customers, but software not authored by an "@AWS" account has not been reviewed or screened by AWS. 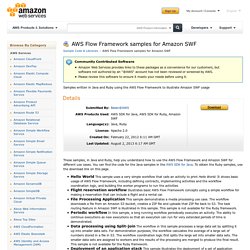 Please review this software to ensure it meets your needs before using it. Samples written in Java and Ruby using the AWS Flow Framework to illustrate Amazon SWF usage Hello World This sample uses a very simple workflow that calls an activity to print Hello World. It shows basic usage of AWS Flow Framework, including defining contracts, implementing activities and the workflow coordination logic, and building the worker programs to run the activities Flight reservation workflow Illustrates basic AWS Flow Framework concepts using a simple workflow for making a reservation that can include a flight and a rental car. 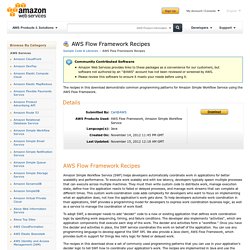 To execute work scalably and with low latency, developers typically spawn multiple processes that can execute across multiple machines. They must then write custom code to distribute work, manage execution state, define how the application reacts to failed or delayed processes, and manage work streams that can complete at different times. This custom work-coordination code adds complexity for developers who want to focus on implementing what an application does, not how the application's work gets done.

To help developers automate work coordination in their applications, SWF provides a programming model for developers to express work coordination business logic, as well as a service to manage the coordination of work itself. Repeatedly Execute an Activity. Introduction to Amazon SWF - Amazon Simple Workflow Service. A growing number of applications are relying on asynchronous and distributed processing. 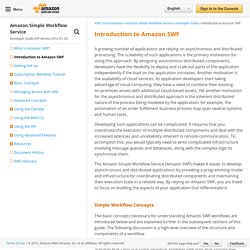 The scalability of such applications is the primary motivation for using this approach. By designing autonomous distributed components, developers have the flexibility to deploy and scale out parts of the application independently if the load on the application increases. Another motivation is the availability of cloud services. As application developers start taking advantage of cloud computing, they have a need to combine their existing on-premises assets with additional cloud-based assets.

Yet another motivation for the asynchronous and distributed approach is the inherent distributed nature of the process being modeled by the application; for example, the automation of an order fulfillment business process may span several systems and human tasks. Developing such applications can be complicated. The fundamental concept in Amazon SWF is the workflow. Mikeaddison93/aws-swf. Amazon Simple Workflow – Cloud-Based Workflow Management. 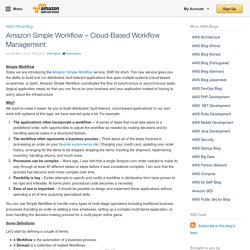 This new service gives you the ability to build and run distributed, fault-tolerant applications that span multiple systems (cloud-based, on-premise, or both). Amazon Simple Workflow coordinates the flow of synchronous or asynchronous tasks (logical application steps) so that you can focus on your business and your application instead of having to worry about the infrastructure. Why? We want to make it easier for you to build distributed, fault-tolerant, cloud-based applications!

In our own work with systems of this type, we have learned quite a bit. The applications often incorporate a workflow — A series of steps that must take place in a predefined order, with opportunities to adjust the workflow as needed by making decisions and by handling special cases in a structured fashion. Some Definitions Let’s start by defining a couple of terms: A Workflow is the automation of a business process.

HelloWorldWorkflow Application - AWS Flow Framework for Java. Although the basic HelloWorld example is structured like a workflow, it differs from an Amazon SWF workflow in several key respects: Conventional and Amazon SWF Workflow Applications You could implement a distributed asynchronous workflow application from scratch, for example, by having your workflow worker interact with an activities worker directly through web services calls. 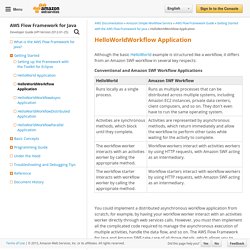 However, you must then implement all the complicated code required to manage the asynchronous execution of multiple activities, handle the data flow, and so on. The AWS Flow Framework for Java and Amazon SWF take care of all those details, which allows you to focus on implementing the business logic. Amazon Simple Workflow Tutorial — boto v2.38.0. Note You are viewing the documentation for an older version of boto (boto2). 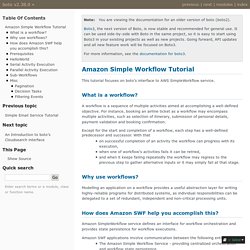 Boto3, the next version of Boto, is now stable and recommended for general use. It can be used side-by-side with Boto in the same project, so it is easy to start using Boto3 in your existing projects as well as new projects. Going forward, API updates and all new feature work will be focused on Boto3. For more information, see the documentation for boto3.