Crack a Combination Bike Lock in Under 30 Seconds 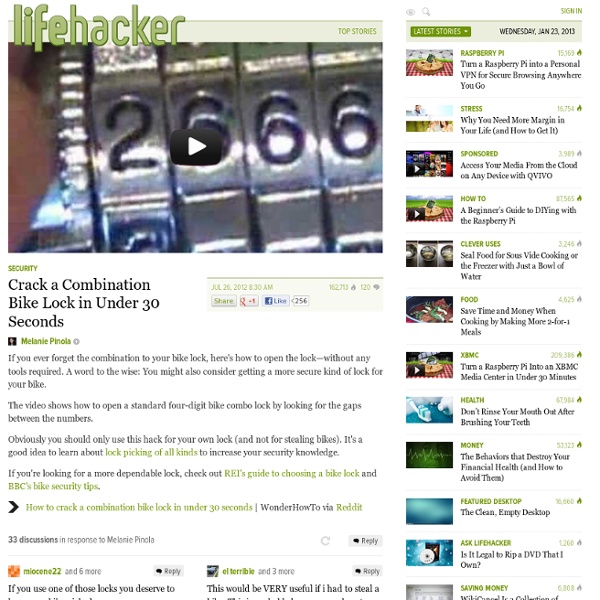 The Korean art galleries that add eye-popping optical tricks to tourists' holiday snaps By Chris Parsons Published: 13:20 GMT, 2 July 2012 | Updated: 15:23 GMT, 2 July 2012 Propping up the Leaning Tower of Pisa or hanging from a cliff face are not what most most would expect when visiting the average art gallery or museum. But not content with simply looking at works of art, visitors to this bizarre museum in Busan, South Korea are able to 'interact' with the pieces thanks to mind-bending optical illusions. Anyone wondering what they would look like walking on a tightrope or held in the grip of a giant snake can find out in the 'Trick Eye' Museum, which uses cleverly manipulated paintings to really put visitors in the picture. Trick of the eye: This cleverly-adapted artwork gives the impression the tourist is pouring a bucket of water towards the painting Interactive: A visitor appears to be painting the toenails of the century-old subject in this mind-bending artwork Walking the line: A seemingly daring tourist takes to a high rope in this clever optical illusion painting

The Best Twenty-Minute Workouts by Stew Smith Do you want to jump start your New Year with some great fitness ideas that you can incorporate into your fitness routine? If you are like many Americans, getting the time to exercise is challenging. But, this article is proof that you can fit fitness into your schedule on just about any "busy" day in your life. The other day, I was emailed the following question: I only have about 20-30 minutes a day to exercise. The superset is a great way to workout if you have limited time. Pushup/Crunch Superset:Repeat 10 cycles of: - 10 regular pushups- 10 crunches- 10 wide pushups- 10 crunches- 10 tricep pushups- 10/10 Left/Right crunches Leg / ab Superset:Repeat 5 cycles of:- 20 squats - 20 crunches- 10 lunges per leg- 10 crunches - 20 calf raises- 20 crunches Running or Walking! How much running or walking can you do in 20-30 minutes? Running4 Mile Track Work:- Jog 1 mile in 7:00-8:00- Three sets of 1/4-mile sprints in 90-100 seconds- Jog or walk - 1/4 mile Spartan Run: Swimming?

Göbekli Tepe By Charles C. Mann Photograph by Vincent J. Musi Every now and then the dawn of civilization is reenacted on a remote hilltop in southern Turkey. The reenactors are busloads of tourists—usually Turkish, sometimes European. Before them are dozens of massive stone pillars arranged into a set of rings, one mashed up against the next. At the time of Göbekli Tepe's construction much of the human race lived in small nomadic bands that survived by foraging for plants and hunting wild animals. Archaeologists are still excavating Göbekli Tepe and debating its meaning. At first the Neolithic Revolution was viewed as a single event—a sudden flash of genius—that occurred in a single location, Mesopotamia, between the Tigris and Euphrates Rivers in what is now southern Iraq, then spread to India, Europe, and beyond. After a moment of stunned quiet, tourists at the site busily snap pictures with cameras and cell phones. Inches below the surface the team struck an elaborately fashioned stone.

Kiss Your Keyboard and Mouse Goodbye With The Leap Since Steven Spielberg expertly crafted it a decade ago, the world has been clamoring for a user interface similar to what was found in sci-fi thriller Minority Report. Even the inkling of flipping through applications and swiping screens in mid-air made geeks tingle all over, but aside from expertly developed hacks on the Xbox Kinect, nothing definitive seemed to break through and truly give the public that enticing functionality of the future. That is, until now. After more than five years of development, a proprietary technology has emerged that synthesizes the shape and movement of the human hand to produce movement onto a computer. It's called The Leap — and for an astonishingly low price of $70, you can begin to control a computer with nothing more than your hands, as early as next February. Mashable spoke with Buckwald about the journey his company took to develop The Leap and bring it to market, as well as an inside look on how it works and what we can expect come February.

Telomerase: the Ultimate Medical Breakthrough by Gary Vey for viewzone (2012) A couple of weeks ago the results of an experiment were published that offers a glimpse into the future of the human race -- a future when there is no more "getting old" and, most significantly, no cancer. But to fully appreciate what has happened, you will need to get the background story first. It is a natural desire to want to live a long life. We now understand exactly what causes aging and death -- on the molecular level. About a decade ago, it was discovered that the ends of the DNA molecular strands had a long series of meaningless code ("TTAGGG" in the language of DNA enzymes) that kept repeating and repeating. For humans, this means that most of our cells have a fixed length to their telomeres that shorten each time they make copies of themselves. Telomeres are actually chains of molecules. When a cell divides, the spiral DNA molecule must split in half and reassemble a copy of itself. The Holy Grail (enzyme): Telomerase The Cancer Problem Notes:

47 Mind-Blowing Psychology-Proven Facts You Should Know About Yourself I’ve decided to start a series called 100 Things You Should Know about People. As in: 100 things you should know if you are going to design an effective and persuasive website, web application or software application. Or maybe just 100 things that everyone should know about humans! The order that I’ll present these 100 things is going to be pretty random. So the fact that this first one is first doesn’t mean that’s it’s the most important.. just that it came to mind first. Dr. <div class="slide-intro-bottom"><a href="

A fascinating interview with China’s biggest rock star Cui Jian would probably be the first person to lament that he, at 51, is still the biggest name in Chinese rock music, and that his music last occupied the cultural zeitgeist in a dramatic 1990 concert tour. That's the impression he gives in this revealing interview with Vice, anyway. Whether you think Cui's cynicism is misplaced or not, his thoughts on the state of Chinese are revealing. Cui, often called the father or grandfather of Chinese rock, is careful when discussing the Chinese government, with which he has a complicated history. A scholar of Chinese pop music, Jonathan Campbell, has said, "I can't think of someone who has ever been more worthy than Cui Jian for induction into the Rock and Roll Hall of Fame." In this interview, Cui says that he's tried and failed many times to secure permission for another big show, but he stops short of complaining or criticizing. Here are, in order, "A Piece of Red Cloth," "Nothing to My Name," and my favorite, "Fake Monk":

Firevine comments on What's something that is common knowledge at your work place that will be mind blowing to the rest of us? Humans Have a Lot More Than Five Senses Today I found out humans have a lot more than five senses. It turns out, there are at least nine senses and most researchers think there are more like twenty-one or so. Just for reference, the commonly held definition of a “sense” is “any system that consists of a group of sensory cell types that respond to a specific physical phenomenon and that corresponds to a particular group of regions within the brain where the signals are received and interpreted.” The commonly held human senses are as follows: Sight: This technically is two senses given the two distinct types of receptors present, one for color (cones) and one for brightness (rods).Taste: This is sometimes argued to be five senses by itself due to the differing types of taste receptors (sweet, salty, sour, bitter, and umami), but generally is just referred to as one sense. If you liked this article, you might also enjoy subscribing to our new Daily Knowledge YouTube channel, as well as: Bonus Facts:

Cosplay of the Day Most Upvoted 1229 votes This Couple Had Their Priest Sing at Their Wedding, But They Weren't Expecting Him to Belt Out Such an Awesome Cover of 'Hallelujah' 1042 votes We Weren't All Born to Give High Fives 625 votes This 78-Year-Old Granny Has the Reaction to Roller Coasters We Can All Relate to 604 votes Dad Records a Vine Every Saturday Morning For Three Months 397 votes We've All Been There, Vending Machine Share Tweet Email Cosplay of the Day Favorite By Unknown Share: 18 EDI from Mass Effect 3. Reposted by More From Cheezburger From Around the Web Recommended by Cheezburger Comments garebear Camel toe included? User ID: J-Spot I'd red, blue, or green choice that. User ID: social networking by Facebook Comments Featured Hot Today Why Google Will Always Be Better Than Bing Because is Batman Bad Screenshots From Otherwise Good Looking Video Games r/photoshopbattles Had Fun With the Picture of Hillary Clinton ... Harness Those Sweater Puppies

The New York pizza guide, from old-school slices to nouveau pies Denino's Pizzeria & Tavern Photograph: Michael Skigen With the ranks of New York pizza spots growing exponentially each year, Gotham is a veritable pie mecca. Patsy’s, Totonno’s and other New York pizza greats still carry on the tradition for classic versions. But new-wave upstarts, like PeteZaaz and Forcella, are bringing fresh ideas, such as quirky toppings and deep-fried pies, to the dough-rolling ranks every year. This is the state of the slice in New York right now.