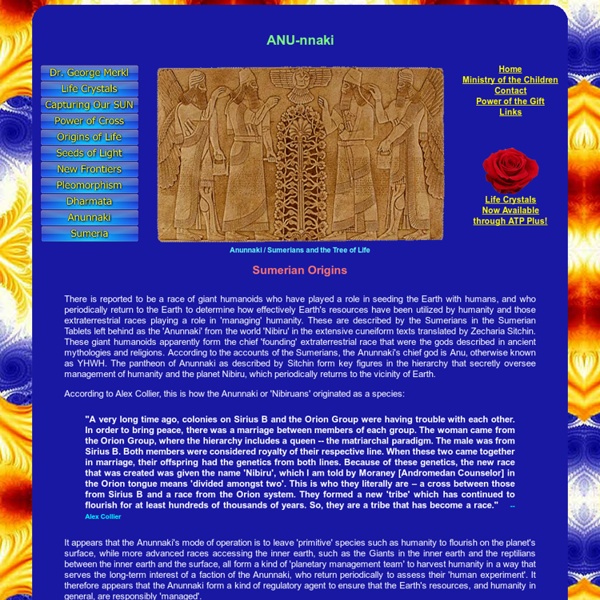 There is reported to be a race of giant humanoids who have played a role in seeding the Earth with humans, and who periodically return to the Earth to determine how effectively Earth's resources have been utilized by humanity and those extraterrestrial races playing a role in 'managing' humanity. These are described by the Sumerians in the Sumerian Tablets left behind as the 'Anunnaki' from the world 'Nibiru' in the extensive cuneiform texts translated by Zecharia Sitchin. These giant humanoids apparently form the chief 'founding' extraterrestrial race that were the gods described in ancient mythologies and religions. According to the accounts of the Sumerians, the Anunnaki's chief god is Anu, otherwise known as YHWH. The pantheon of Anunnaki as described by Sitchin form key figures in the hierarchy that secretly oversee management of humanity and the planet Nibiru, which periodically returns to the vicinity of Earth. Anunnaki Sri-Yantra Written by Ananda Bosman Nibiru Radiating Cross Enki Related:  EXTRA

Untitled Document Genesis 6:4 "The Nephilim were on the earth in those days--and also afterward--when the sons of God went to the daughters of men and had children by them. They were the heroes of old, men of renown." Giant's skeletons found on earth apparently range up to a towering 36ft in height. "We saw the Nephilim there (the descendants of Anak come from the Nephilim). We seemed like grasshoppers in our own eyes, and we looked the same to them." - Numbers 13:33 The Annunaki, according to ancient Sumerian Texts are responsible for engineering mankind. One must question why on earth the authorities are censoring such extraordinary finds? "If the "truth will set you free", clearly our authorities want to keep us as slaves." - SOC We know much of what is known in these areas is being censored. Are/were "the sons of God" referred to in Genesis 6:2 the Annunaki the descendants of Anak referred to in Numbers 13:33? By C A.- Present day modern man which averages about 6-feet tall + or - several inches or more.

AlphaNewsDaily www.alphanewsdaily.com Alpha News Daily Weekly News Update To Readers: If your e-mail comes through 'unstyled' with characters like "%$#* in the headlines or links, go to: www.alphanewsdaily.com/WeeklyNews.html This weekly news update is being sent because the Bible warns us to know the prophecies and to "watch" for their fulfillment (which can only be done by learning and knowing what is going on around the world) ... yet, many churches and synagogues today ignore and deny Bible prophecy (which in itself is a major fulfillment of Bible prophecy) ... Now, a short Bible prophecy lesson to help show how close we are ... + Israel back in the Land as a nation (this started the clock ticking ...) + Iran and allies threatening war against Israel + Russia rising ... and acting as a 'guard' for Iran + China armed with weapons capable of quickly destroying 1/3 of mankind + Nations of the ancient Roman Empire (Europe) reuniting and rising in power + Teachings of false 'Prophets' leading many U.S. --Fox News

Gallery of mystery part 2 Peru bronze wheels, described by professor Rafael Larco Hoyle in his work "Peru"; they resemble very much modern gears. The famous "Kiev astronaut": it's the only European little statue found until now which shows so evident "spatial" features. Two prehistoric Japanese little statues: they represent creatures who wear special space-suits and big helmets joined to the space-suit by a sort of bolt collar. Huge limestone statue eroded by water in Lultùn Caves, in Yucatan (Mexico), today submerged at a deep of hundredths of meters under the sea level. Painting by Filippo Lippi, "La Madonna e san Giovannino", made in XV century and kept in Palazzo Vecchio, in Florence (Italy). To know more: This photo shows the remains of the Antikythera mechanism (on the right the technical scheme). Fossilized giant discovered in 1895 by Mr. The foundation of this terrace at Baalbek (Lebanon) is approximately 5 million square feet in size.

The Mysterious Tarim Mummies Hidden behind the Himalaya and Karakoram mountain ranges and nestled between the Kunlun and Tien Shan ranges is the vast Tarim Basin, one of the hottest, driest deserts in the world. Yet it is here that one of the most outstanding anthropological finds of the 20th century was discovered. Over the past several years, Chinese archaeologists have dug up 100 or so Caucasiod mummies from the parched sands of the Täklimakan desert. The bodies date to between 2000 BC and 300 BC. Who were these ancient Caucasian residents of a remote area of the world that would later become part of the Silk Road? Chinese texts of the second century BC mention troublesome "barbarians" called the Yuezhi and the Wusun livng on China's far western borders. The Tarim mummies have several Caucasoid features in common, such as elongated bodies, angular faces, recessed eyes, and long, curly braided hair ranging in colour from blonde to red to deep brown, possibly from having been bleached by salt. Sources J.P.

Prison Tattoo Field Guide 14 Words The number 14 on this man's right temple represents the "14 Words" of the white nationalist David Lane, which encompass the supremacist philosophy: "We must secure the existence of our people and a future for White Children" On the left temple, the number 88 stands for "Heil Hitler," H being the eighth letter of the alphabet. The 88 is also representative of an 88-word passage from Hitler's Mein Kampf, which inspired Lane to write his own manifesto. The interlocking triangles on the left cheek are a Norse symbol known as the Valknut that represents the idea of dying in battle. Teardrop One of the most common criminal tattoos is the teardrop underneath the eye. Clock With No Hands The clock with no hands symbolizes "doing time" and is representative of the meaninglessness of time to an inmate serving a lengthy, or lifelong, prison sentence. Three Dots The three dots tattoo, worn either on the hand or near the eye, represents the phrase "Mi Vida Loca," or "My Crazy Life." La Eme

The Yosemite Mummies | | Greater AncestorsGreater Ancestors The “Yosemite Mummies” Photo from Ripley’s Believe it or Not who currently host the mummies. The Giants of Yosemite Valley By Bobbie Short The year, 1885. In California’s great Yosemite Valley under the misty expanse near Bridal-Veil Falls, a party of silver and wannabe gold miners discovered what was to become the mystery of the decade. Seasoned miners, they were familiar with the natural formation of rock, this particular grouping struck Mr. The miners set about removing the pile of stones. “As pretty as any wall on any building that I have ever seen” is the way one miner described it. Disappointment fell heavily upon their heads as, in the end, they found the vault empty save a very large mummified corpse that lay on the ledge, which was carved from the natural stone for the express purpose of burial. The miners removed parts of the animal skins to view the corpse and found it to be that of a woman holding a child to her breast. In an additional excerpt, Capt.

The Unique Dialect of Prison Slang - PSYCHROD All cultures and subcultures have their own unique phrases and meanings in their various dialects. Nearly all languages contain an abundance of informal phrases or slang terms, which are often used with such regularity that they have evolved into a standard form of communication. Inmates in different correctional facilities have also developed and incorporated an abundance of prison slang terms into their everyday communication. Prison Slang: All Day: An inmate convicted of a life sentence without the possibility of parole.Banger: A small prison made weapon that is easy to conceal.Bate: A person that is probating for a prison gang.