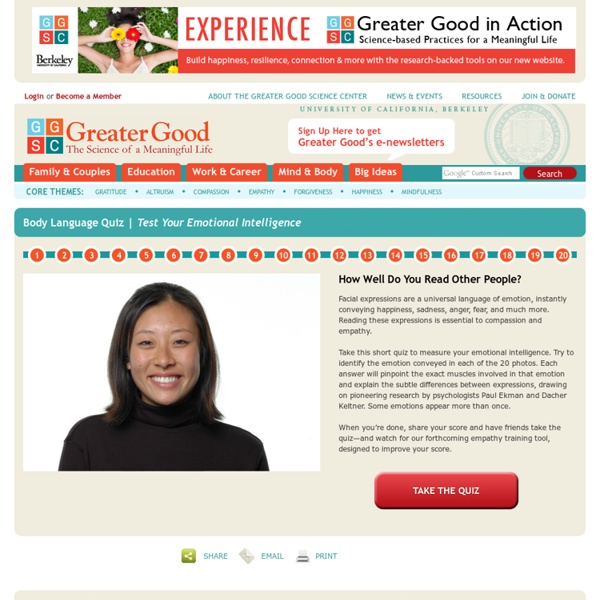 Facial expressions are a universal language of emotion, instantly conveying happiness, sadness, anger, fear, and much more. Reading these expressions is essential to compassion and empathy. Take this short quiz to measure your emotional intelligence. Try to identify the emotion conveyed in each of the 20 photos. Each answer will pinpoint the exact muscles involved in that emotion and explain the subtle differences between expressions, drawing on pioneering research by psychologists Paul Ekman and Dacher Keltner. Some emotions appear more than once. When you’re done, share your score and have friends take the quiz—and watch for our forthcoming empathy training tool, designed to improve your score.

8 Free Mind Map Tools & How to Best Use Them Advertisement Here’s the good news. Finally, we can be like Leonardo da Vinci’s in one small way. Giving Good Praise to Girls: What Messages Stick How to praise kids: It’s a hot topic for many parents and educators. A lot of the conversation around it has stemmed from studies by Carol Dweck, professor of psychology at Stanford who has been researching this specific topic for many years. “My research shows that praise for intelligence or ability backfires,” said Dweck, who co-authored a seminal research paper on the effects of praise on motivation and performance.

how to be creative Accept that you’ve got the creative urge and it’s never going to go away. Make friends with it. Drink some tequila if you need to. Commit to the process. Rome wasn’t built in a day. Unless of course it was built by aliens. 18 Behaviors of Emotionally Intelligent People When emotional intelligence (EQ) first appeared to the masses, it served as the missing link in a peculiar finding: people with average IQs outperform those with the highest IQs 70 percent of the time. This anomaly threw a massive wrench into the broadly held assumption that IQ was the sole source of success. Decades of research now point to emotional intelligence as being the critical factor that sets star performers apart from the rest of the pack. The connection is so strong that 90 percent of top performers have high emotional intelligence. Emotional intelligence is the "something" in each of us that is a bit intangible.

Bloomin' Apps This page gathers all of the Bloomin' Apps projects in one place.Each image has clickable hotspots and includes suggestions for iPad, Android, Google and online tools and applications to support each of the levels of Bloom's Revised Taxonomy.I have created a page to allow you to share your favorite online tool, iOS, or Android app with others. Cogs of the Cognitive Processes I began to think about the triangular shape of Bloom's Taxonomy and realized I thought of it a bit differently.Since the cognitive processes are meant to be used when necessary, and any learner goes in and out of the each level as they acquire new content and turn it into knowledge, I created a different type of image that showcased my thoughts about Bloom's more meaningfully.Here is my visual which showcases the interlocking nature of the cognitive processes or, simply, the "Cogs of the Cognitive Processes".

How Important is Grit in Student Achievement? Culture Teaching Strategies When it comes to high achievement, grit may be as essential as intelligence. By Emily Hanford, American RadioWorks Top of the Web Follow Springo on : Find top sites My top sites 12 Laws of the Emotions Explore the psychology of the emotions with these 12 laws. We tend to think of our emotions as having laws unto themselves, but one psychological researcher has suggested that our emotions do follow certain general rules. Professor Nico Frijda puts forward twelve laws of the emotions (Fridja, 2006). As with most laws there are exceptions, but these have been synthesised from years of psychological research and hold true much of the time. 1.

The Best Websites On The Internet The internet is a big place, with a lot of content. Over one billion websites at the time of writing. With the web constantly changing, it’s hard to keep track of which sites have the best content and resources. To help make things easier, we’ve compiled this enormous list of the best websites on the internet, split into their relevant categories. The websites on this list are those that we consider to be the best: genuinely useful, top-of-the-line sites (not apps) where you’ll find what you need.

Please Don't Touch Me! {Dealing with Anxiety in Kids} As the holidays approached and we were getting ready to visit family and friends, I was tempted to create a festive and sparkly sign to hang around my daughter's neck. As we visited a new-to-her preschool last week I wanted to do the same thing again. I wanted to create one that could be seen from the front and one that could be seen from the back. The sign I wanted to make would've said, "Please don't touch me," "I am really overwhelmed right now" or "I am really nice if you give me some time to warm up." Another main sign that I'd love to hang on her neck would say, "Be kind. I'm trying to hold it together." Why Americans Are the Weirdest People in the World IN THE SUMMER of 1995, a young graduate student in anthropology at UCLA named Joe Henrich traveled to Peru to carry out some fieldwork among the Machiguenga, an indigenous people who live north of Machu Picchu in the Amazon basin. The Machiguenga had traditionally been horticulturalists who lived in single-family, thatch-roofed houses in small hamlets composed of clusters of extended families. For sustenance, they relied on local game and produce from small-scale farming. They shared with their kin but rarely traded with outside groups. While the setting was fairly typical for an anthropologist, Henrich’s research was not. Rather than practice traditional ethnography, he decided to run a behavioral experiment that had been developed by economists.

Developing Emotional Awareness: Recognizing & Harnessing Your Emotions We often hear from people who feel overwhelmed by stress, family, work and relationship problems, health challenges, and painful emotions. They’ve tried many approaches to help themselves feel better, but they just can’t seem to follow through, or what they’ve done hasn't helped them enough. If this sounds familiar, you know that it’s all too easy to become discouraged when you’re stuck. The problem is not willpower—all the willpower in the world won’t matter if you can’t manage stress or keep your emotions in balance.

100 Amazing How-To Sites to Teach Yourself Anything Posted by Site Administrator in Online Learning May 7th, 2009 Learning new skills and expanding your knowledge doesn’t have to cost you an arm and a leg. There are loads of free resources on the Web that can help you find instructional videos, tutorials and classes to learn a wide variety of skills from fixing basic car problems to speaking another language. How a Bigger Purpose Can Motivate Students to Learn Jane Mount/MindShift A few years ago, psychologist David Yeager and his colleagues noticed something interesting while interviewing high school students in the San Francisco Bay Area about their hopes, dreams and life goals. It was no surprise that students often said that making money, attaining fame or pursuing a career that they enjoyed were important to them. But many of them also spoke of additionally wanting to make a positive impact on their community or society — such as by becoming a doctor to take care of people, or a pastor who “makes a difference.”