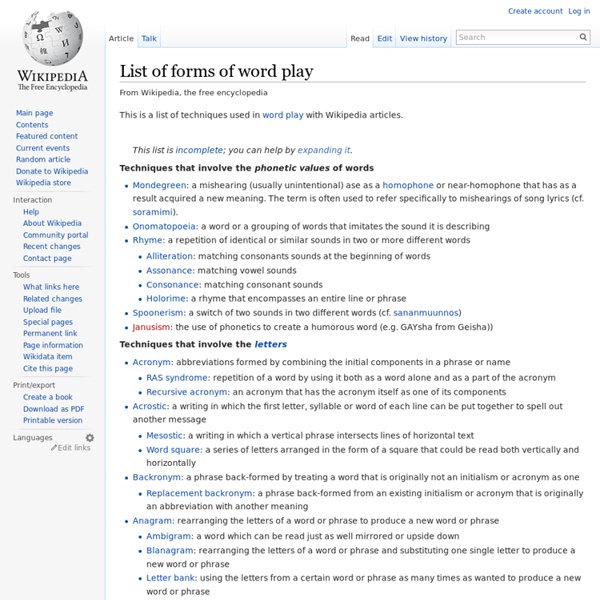 This is a list of techniques used in word play with Wikipedia articles. Techniques that involve the phonetic values of words Mondegreen: a mishearing (usually unintentional) ase as a homophone or near-homophone that has as a result acquired a new meaning. The term is often used to refer specifically to mishearings of song lyrics (cf. soramimi).Onomatopoeia: a word or a grouping of words that imitates the sound it is describingRhyme: a repetition of identical or similar sounds in two or more different words Alliteration: matching consonants sounds at the beginning of wordsAssonance: matching vowel soundsConsonance: matching consonant soundsHolorime: a rhyme that encompasses an entire line or phraseSpoonerism: a switch of two sounds in two different words (cf. sananmuunnos)Janusism: the use of phonetics to create a humorous word (e.g. GAYsha from Geisha)) Techniques that involve semantics and the choosing of words Techniques that involve the manipulation of the entire sentence or passage

Interrobang The interrobang, also known as the interabang[1] (informally known as quexclamation mark), /ɪnˈtɛrəbæŋ/, ‽ (often represented by ?! or !?), is a nonstandard punctuation mark used in various written languages and intended to combine the functions of the question mark (also called the "interrogative point")[2] and the exclamation mark or exclamation point (known in printers' and programmers' jargon as the "bang").[3] The glyph is a superimposition of these two marks. The word itself is an example of a portmanteau which incorporates an onomatopoeia. 100 Exquisite Adjectives By Mark Nichol Adjectives — descriptive words that modify nouns — often come under fire for their cluttering quality, but often it’s quality, not quantity, that is the issue. Plenty of tired adjectives are available to spoil a good sentence, but when you find just the right word for the job, enrichment ensues. Practice precision when you select words.

Cheerfulness, Gratitude, Thankfulness, Joyfulness: Quotations, Sayings, Wisdom, Poetry, Aphorisms, Virtues Compiled by Michael P. Garofalo The Good Life Website Cloud Hands Blog Spirit of Gardening "Let me arise and open the gate, to breathe the wild warm air of the heath, And to let in Love, and to let out Hate, And anger at living and scorn of Fate, To let in Life, and to let out Death. 18 Common Words That You Should Replace in Your Writing It’s a familiar scene: you’re slumped over your keyboard or notebook, obsessing over your character. While we tend to agonize over everything from structure to backstory, it’s important to weigh how you write something too. A perfectly constructed world is flat on the page if you use feeble, common words. When you’re finished constructing your perfectly balanced world, do your writing a favor and take another pass to weed out these 18 haggard words.

Irony - Examples and Definition of Irony Irony Definition Irony is a figure of speech in which words are used in such a way that their intended meaning is different from the actual meaning of the words. It may also be a situation that may end up in quite a different way than what is generally anticipated.

How To Stop Absorbing Other People’s Negative Energy By Jesse Herman and Steven Bancarz| Empathy is the ability to recognize and feel other peoples emotions. Sympathy is feeling compassion for other people. Often times to be an “empath” means that you are absorbing much of the pain and suffering in your environment, which can sacrifice your won ability to function at a high level. If you have every been in a room with a negative person, you know just how toxic their energy can be. Learning to stop absorbing other people’s energies is such a great spiritual skill to have. Here are five ways to stop absorbing other people’s energy. Onomatopoeia - Examples and Definition of Onomatopoeia Onomatopoeia Definition Onomatopoeia is defined as a word, which imitates the natural sounds of a thing. It creates a sound effect that mimics the thing described, making the description more expressive and interesting. For instance, saying, “The gushing stream flows in the forest” is a more meaningful description than just saying, “The stream flows in the forest.” The reader is drawn to hear the sound of a “gushing stream” which makes the expression more effective.

Annie Murphy Paul: What Your Eyes Say About How You Think And Learn As you read these words, try paying attention to something you usually never notice: the movements of your eyes. While you scan these lines of text, or glance at that ad over there or look up from the screen at the room beyond, your eyes are making tiny movements, called saccades, and brief pauses, called fixations. Scientists are discovering that eye movement patterns — where we look, and for how long — reveals important information about how we read, how we learn and even what kind of people we are.

ironic Online Etymology Dictionary ironic (adj.) 1620s, from Late Latin ironicus, from Greek eironikos "dissembling, putting on a feigned ignorance," from eironeia (see irony). Related: Ironical (1570s); ironically. 6 Life Lessons I Already Know, But Keep Forgetting (And Then Remembering Again) My definition of truth is “something you keep stumbling into, again and again, in different forms.” I, like most people, spent most of my life wanting a quick fix for my suffering. My biggest epiphany (and greatest disillusionment) was when I realized that all the life lessons I’d learned, all of the epiphanies I’d had about my healing and happiness, would have to be relearned again and again. Though I’ve seen the truth, I keep losing it and, then, having to find it again. I am, like everyone else, on a journey of my own, a journey where I encounter the same truths as everyone else in my own unique forms. Of course, I do (and will continue to) get lost.

Consistency Consistency means: "the property of holding together and retaining shape." This is the most commonly-used definition of the word. It describes something that is the same throughout. Quotes[edit] Consistency is contrary to nature, contrary to life. 30 traits of an Empath (How to know if you're an Empath) By: Christel Broederlow What is an empath? Being an empath is when you are affected by other people’s energies, and have an innate ability to intuitively feel and perceive others. Your life is unconsciously influenced by others’ desires, wishes, thoughts, and moods. Being an empath is much more than being highly sensitive and it’s not just limited to emotions.

You are missed — Better Humans “Something feels missing from my life but I can’t quite put my finger on it.” I can’t tell you how many times I hear some variation of that every week. (It’s a lot.) I hear it from tech entrepreneurs who are on the verge of burn out, writers who are experiencing a temporary block, photographers who are making a ton of money working with big brands, and designers who have a full plate of client work. I hear it from friends at Facebook, at Google, and at Apple. After listening to unique story after story, and each person attempting to describe what is happening in their life, it dawned on me that what was missing from every single story was very simple.

7 Body Language Tricks To Make Anyone Instantly Like You There’s no question that body language is important. And, according to Leil Lowndes in her book “How To Talk To Anyone,” you can capture — and hold — anyone’s attention without even saying a word. We’ve selected the best body language techniques from the book and shared them below: The Flooding Smile “Don’t flash an immediate smile when you greet someone,” says Lowndes. If you do, it appears as if anyone in your line of sight would receive that same smile.