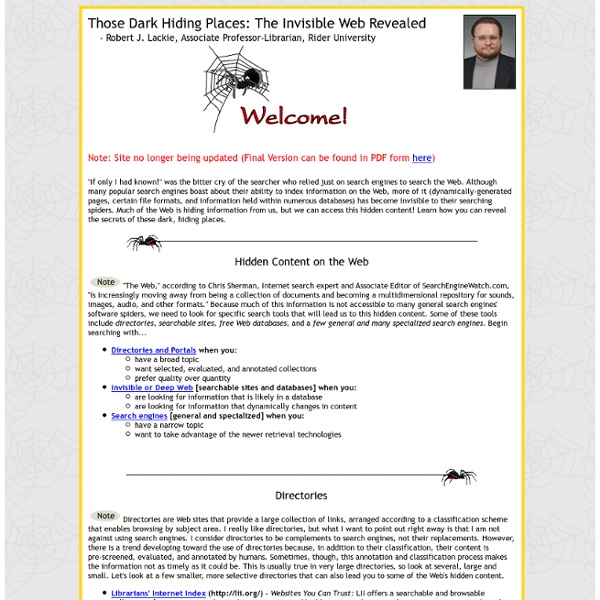 The dark side of the internet | Technology Fourteen years ago, a pasty Irish teenager with a flair for inventions arrived at Edinburgh University to study artificial intelligence and computer science. For his thesis project, Ian Clarke created "a Distributed, Decentralised Information Storage and Retrieval System", or, as a less precise person might put it, a revolutionary new way for people to use the internet without detection. By downloading Clarke's software, which he intended to distribute for free, anyone could chat online, or read or set up a website, or share files, with almost complete anonymity. "It seemed so obvious that that was what the net was supposed to be about – freedom to communicate," Clarke says now. "But [back then] in the late 90s that simply wasn't the case. His tutors were not bowled over. Undaunted, in 2000 Clarke publicly released his software, now more appealingly called Freenet. Installing the software takes barely a couple of minutes and requires minimal computer skills. Unfathomable and mysterious

! Google Ultimate Interface About Google In 1996-1997, Larry Page and Sergey Brin came up with an algorithm to rank web pages, called PageRank. Realizing the potential to improve search engines, they tried and failed to sell the technology to any. So they founded Google, which in an incredibly short period of time has become one of the world’s most powerful companies. While primarily known as a search engine, Google now makes a wide variety of web-based and other software and is known for investing in wide-ranging projects outside their core such as through their philanthropic arm, Google.org. Their products are available in almost every country and in a very large number of languages. Google’s enourmously successful advertising business accounts for almost all of their revenue and allows Google to subsidize many other ideas. Google is a market and quality leader in web search, online maps, online video (through YouTube), and areas. Alternatives to Google Why not use nothing but Google all the time?

Howtos, Rants, and Reviews Facebook reviled their new profile and look yesterday and I think people are really going to like it. The problem is it's going to take a couple weeks for the changes to make it the general public. If you are as impatient as I am then you don't want to wait for it roll out slowly over the next couple weeks. Well you don't have to you can enable it now. No one other than other developers will be able to see it, everyone else will just see your old profile. In order to get the new profile look and timeline feature you have to be a developer, which isn't that big of deal really. I'm not going to explain it all in writing because I have a video that shows you how to do it and a picture is worth a thousand words am I right? At Facebook's F8 conference today they have revealed what the new profile will look like. The Timeline is really a place for you to curate your profile and show what's important to you. For more information on the changes coming to Facebook see the F8 video. YoYo.com

The dark side of the web | Analysis | Features Posted on 9 Mar 2010 at 15:47 Google sees only a fraction of the content that appears on the internet. Stuart Andrews finds out what's lurking in the deep web When Google indexes so many billions of web pages that it doesn’t even bother listing the number any more, it’s hard to imagine that much lies beyond its far-reaching tentacles. Beneath, however, lies an online world that few know exists. It’s a realm of huge, untapped reserves of valuable information containing sprawling databases, hidden websites and murky forums. At the same time, the underground web is the best hope for those who want to escape the bonds of totalitarian state censorship, and share their ideas or experiences with the outside world. Interested? Deep webs, the dark web and darknets The first thing to grasp is that, while the elements that make up this other web have aspects in common, we’re not talking about a single, unified entity. The deep web isn’t half as strange or sinister as it sounds. Treasures of the deep

GHH - The "Google Hack" Honeypot The 50 Best Ways to Disable Built-in Windows Features You Don’t Want Over the years, we’ve written about loads of ways to disable features, tweak things that don’t work the way you want, and remove other things entirely. Here’s the list of the 50 best ways to do just that. Just in case you missed some of our recent roundup articles, here’s a couple of roundups of our very best articles for you to check out: If you’ve already been through those, keep reading for how to disable loads of Windows features you might not want. Disable Context Menu Items After you start installing a bunch of software, you’ll notice your context menu starts filling up with more and more items, becoming bloated, slow, and even more annoying—it starts taking up the whole screen. You’ll probably notice that the first article is an in-depth guide to help you get rid of just about any item, whereas the rest are more specific for some of the more annoying items. How to Disable Caps Lock Key in Windows 7 or Vista How to Disable Caps Lock Key in Windows 7 or Vista

How To Access THE HIDDEN WIKI (Deep web, secret Internet) (Some of this was copied from BB.com, I'm just bringing it to TBN) For those who don't know, the deep web represents a gargantuan part of the internet which is not accessible through regular searches via google or other search engines. Searching on the Internet today can be compared to dragging a net across the surface of the ocean. While a great deal may be caught in the net, there is still a wealth of information that is deep, and therefore, missed. The reason is simple: Most of the Web's information is buried far down on dynamically generated sites, and standard search engines never find it. Here are some facts on The Deep Web: · Public information on the deep Web is currently 400 to 550 times larger than the commonly defined World Wide Web. · The deep Web contains 7,500 terabytes of information compared to 19 terabytes of information in the surface Web. · The deep Web contains nearly 550 billion individual documents compared to the 1 billion of the surface Web. Hope this helped.

50 Best Websites 2014 10 Minute Mail In case its name didn't give it away, 10 Minute Mail sets you up with a self-destructing email address that expires in -- you guessed it -- 10 minutes. Your temporary inbox works just like regular email, allowing you to forward and respond to messages, and you can add extra time if 10 minutes isn't quite long enough. Once you're done, light a match and walk away. 10 Minute Mail Any.do Any.do is already one of the best task managers for smartphones, and the website is especially useful when you need a big-picture view of your plans. Any.do Background Burner For those without serious Photoshop skills, Background Burner does a surprisingly good job of removing background images from photos. Background Burner But Does It Float This endlessly scrolling art site's been around for at least five years, but it's still going strong as a way to let your mind melt for a while. But Does It Float Calm.com You're already five slides into this list with 45 more to go. Calm.com CamelCamelCamel Glyde

What is Dark Internet, How to Access Onion Domains and Configure Hosting for the Dark Web | Roger Davies What if I said there was Internet beyond what you can normally ’see’? Like dark matter, or the memory of a half-remembered dream, it lies just outside of perception, hidden beneath the sea of information. It is estimated that the Dark Web is several orders of magnitude larger than the surface of the Web. Just what is it? And how can you access it? Tor .onion domains There are many different techniques in use, but Tor’s onion router network is probably the easiest one to get started with. With Tor installed, you can access .onion domains such as the Hidden Wiki (which tells you a little about this realm), setup hosting with freedom hosting, create a blog at blog.masked or visit the Tor directory to see what other services are available. Hosting Pages on the Tor Network There are no laws here and you are free to publish anything and everything and nobody will even be able to identify you, much less stop you. I2P2 Network and .i2p Domains See the great tutorial below for how to set this up:

100+ Google Tricks That Will Save You Time in School – Eternal Code [via onlinecolleges.net] With classes, homework, and projects–not to mention your social life–time is truly at a premium for you, so why not latch onto the wide world that Google has to offer? From super-effective search tricks to Google hacks specifically for education to tricks and tips for using Gmail, Google Docs, and Google Calendar, these tricks will surely save you some precious time. Search Tricks These search tricks can save you time when researching online for your next project or just to find out what time it is across the world, so start using these right away. Convert units. Google Specifically for Education From Google Scholar that returns only results from scholarly literature to learning more about computer science, these Google items will help you at school. Google Scholar. Google Docs Google Docs is a great replacement for Word, Excel, and PowerPoint, so learn how to use this product even more efficiently. Use premade templates. Gmail Use the Tasks as a to-do list.