8 TEDtalks That Will Change Your Life Forever 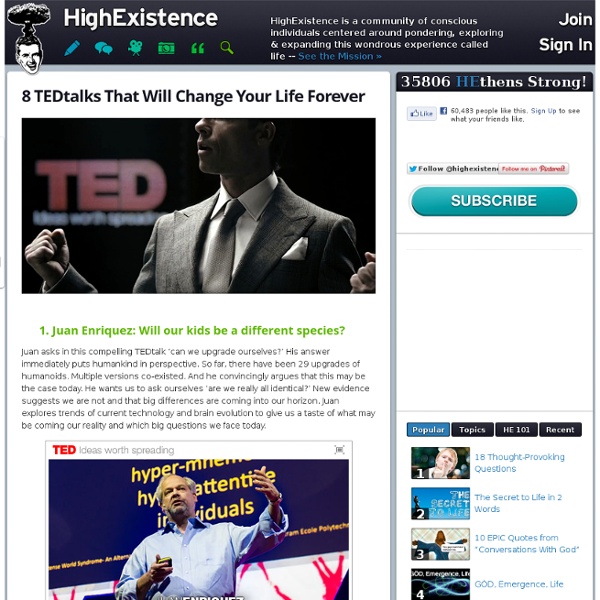 1. Juan Enriquez: Will our kids be a different species? Juan asks in this compelling TEDtalk ‘can we upgrade ourselves?’ His answer immediately puts humankind in perspective. So far, there have been 29 upgrades of humanoids. Multiple versions co-existed. Read more in his book Homo Evolutis. 2. Brené tells us a story about expanding our perception in a way that could change our lives forever. Read more in her book The Gifts of Imperfection: Let Go of Who You Think You’re Supposed to Be and Embrace Who You Are 3. Jane is a gamer. Read more in her book Reality Is Broken: Why Games Make Us Better and How They Can Change The World 4. We often hear that success is a choice, that it is right around the corner and is for everybody to grasp. Read more in his book Status Anxiety 5. Daphne shows the world how an outdated education system can be outperformed in many ways by something new. 6. Do you eat? Learn more about Incredible Edible here 7. 8.

An Essay by Einstein -- The World As I See It "How strange is the lot of us mortals! Each of us is here for a brief sojourn; for what purpose he knows not, though he sometimes thinks he senses it. But without deeper reflection one knows from daily life that one exists for other people -- first of all for those upon whose smiles and well-being our own happiness is wholly dependent, and then for the many, unknown to us, to whose destinies we are bound by the ties of sympathy. A hundred times every day I remind myself that my inner and outer life are based on the labors of other men, living and dead, and that I must exert myself in order to give in the same measure as I have received and am still receiving... "I have never looked upon ease and happiness as ends in themselves -- this critical basis I call the ideal of a pigsty. The ideals that have lighted my way, and time after time have given me new courage to face life cheerfully, have been Kindness, Beauty, and Truth. "My political ideal is democracy.

Startup Mistakes: Building Everything Yourself | StartupMuse One of the biggest challenges startups face is deciding what is core to their business. For example, at ShopSavvy we spent a LOT of time developing technology around barcode scanning. We assumed that developing and owning our own intellectual property would make our company more attractive to potential acquirers or investors. Turns out this assumption was a huge mistake that cost us time – one of the most valuable assets that startups and entrepreneurs seem to lack. In the case of our barcode scanning technology we used a combination of open source software and proprietary code for the Android version of ShopSavvy. Around that same time, I was in Europe helping with the launch of the G1 and stumbled across a PhD engineer by the name of Benoit Maison who lived in Belgium. Thirty days came and went and we were on the fence about using licensed technology in our app. Six months later, version one of our scanner was available. The real mistake was not understanding our business.

Music, Mind, and Meaning This is a revised version of AI Memo No. 616, MIT Artificial Intelligence Laboratory. An earlier published version appeared in Music, Mind, and Brain: The Neuropsychology of Music (Manfred Clynes, ed.) Plenum, New York, 1981 Why Do We Like Music? Why do we like music? Our culture immerses us in it for hours each day, and everyone knows how it touches our emotions, but few think of how music touches other kinds of thought. Have we the tools for such work? Certainly we know a bit about the obvious processes of reason–the ways we organize and represent ideas we get. The old distinctions among emotion, reason, and aesthetics are like the earth, air, and fire of an ancient alchemy. Much of what we now know of the mind emerged in this century from other subjects once considered just as personal and inaccessible but which were explored, for example, by Freud in his work on adults' dreams and jokes, and by Piaget in his work on children's thought and play. Why do we like music? Cadence.

My Next Big Thing. . . | StartupMuse Lots of you are asking about what I am up to these days so I thought I would give you a little update. Since January I have been working on a new startup called HAUL. Initially, spending all of my free time learning all I could about the market and attempting to formulate a plan to best address the opportunity. Most recently we’ve been recruiting the team and raising capital. For the past few months we have been in ‘relative’ stealth mode. meeting with lawyersshopping for office spaceworking with software developershiring employeesdoing video shootsraising capitalselected by Google for their Glass Explorer Programtelling friends what are you doing when they ask We aren’t quite ready to come ‘out’ as it were, but I can tell you that HAUL addresses a market segment an order of magnitude larger than any of my prior startups combined.

Raw vegetable crackers - YES there is a use for juice pulp! If you've ever juiced, you've asked but what about the pulp? I've put some in soup but never the whole quantity leftover from juicing. I can't live with the guilt of throwing it out, even when it is to become compost, anymore. I needed to try something and my experiment turned out to be a tasty one. We all crave crunch other than celery when on a mostly raw diet so here it is, my very own raw cracker recipe: Super adaptable, ingredients for this recipe can vary greatly, I've done this twice so far with similar results so now feel ready to post the recipe. As a sidenote, you can follow a similar process to make cookies with carrot and pineapple pulp, blend with raisins or dates, coconut, walnuts, flax, hemp, agave or honey and use a bite size cookie cutter (try a spice jar lid!). My crackers have such an intriguing colour cuz they're made with beets! I would consider the pictures here to represent a double batch of crackers. Here's how: Most of the flattening was done with the spatula.

Watch Psychology » Page 3 of 11 Documentaries Online Free Fear is apparently a universal emotion; all persons, consciously or unconsciously, have fear in some sort. In short, fear is the ability to recognize danger leading to an urge to confront it or flee from it. Very few people understand the programming of fear, and why it distorts our perceptions. While fear is a program used for our survival, fear also creates irrational beliefs that cause larger systems of fear like politics, religion and the media. Delve into the science of non-verbal signals as this very visual and highly entertaining exposé reveals the hidden language in which 93% of human communication takes place. The Marketing of Madness is the definitive documentary on the psychiatric drugging industry. In 1988, Chris Bryson was found running down a Kansas City street naked, beaten, and bloody wearing nothing but a dog collar and a leash. The celebrity trend for size zero has been criticised worldwide for encouraging women to starve in secret.

Stop listening to what they are saying. . . | StartupMuse Recently I had an epiphany that has changed the way I deal with almost every person in my life and I wanted to share it with you. My question for you? The next time you are involved in some sort of interpersonal conflict – with a spouse, friend, client or employee – what would happen if you quit listening to the words they are writing or speaking and start thinking about where they are coming from. Think about the why more than the what. In high school and college I competed in cross examination debate, traveling nationally to argue any side of any argument (in rapid fire fashion like this young lad). By college I was really good at listening to the first 30 seconds of an argument and preparing my rebuttal as my opponent completed their reasoning and support. The other day I was involved in a tense conversation with someone and for some reason I stopped listening to their attacks and starting thinking about where they were in their life. Give it a try.