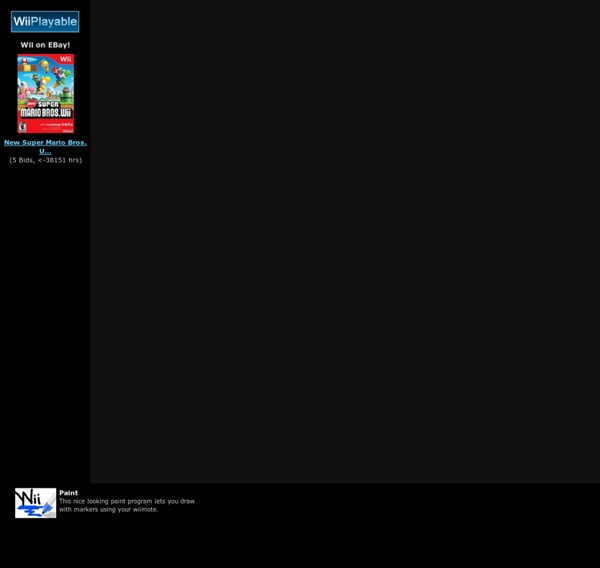 real media paint software Rebelle is a natural media paint program with focus on real watercolors and acrylics. I have worked on this technology more than two years to achieve the most realistic watercolor painting tools possible. The watercolor simulation is based on real world color mixing, blending, moistening and drying. The 6 Creepiest Places on Earth It doesn't matter whether or not you believe in ghosts, there are some places in which none of us would want to spend a night. These places have well earned their reputations as being so creepy, tragic or mysterious (or all three) that they definitely qualify as "haunted." Places like...

Create Something. Donate Login Remember Me Create An Account Forgot Password Free online play. Classic video games online. Play FREE Arcade games! 1980s Shockwave, Flash, Java and DOS classic games for your PC. Brought to you by Triplets and Us Free Play Classic 80's Arcade Games FreeEnjoy your favorite video games and remember the great decade that was and still is the 80's.Best of all, NO tokens required to play these free video games! (Alphabetical listing of all our online games) New Buy Your Favorite 80's Video Games for Windows Online New

The memo that 'proves aliens landed at Roswell'... released online by the FBI By Daily Mail Reporter Updated: 07:37 GMT, 11 April 2011 A bizarre memo that appears to prove that aliens did land in New Mexico prior to 1950 has been published by the FBI. The bureau has made thousands of files available in a new online resource called The Vault. Among them is a memo to the director from Guy Hottel, the special agent in charge of the Washington field office in 1950. Proof of (alien) life?

How to Think of What to Draw Edit Article Edited by Dvortygirl, Laptop123, Nicole Willson, Random and 41 others Have you been inspired to draw, including getting inspiration from famous artists, or are just doing it for fun? The 25 Largest Facebook Games As 2010 Begins - Flock The 25 Largest Facebook Games As 2010 Begins While 2009 was the year social games exploded into the mainstream consciousness, developers aren’t slowing down as 2010 begins. Instead, they’re only speeding up – hiring more coders and artists, spending more intelligently on customer acquisition, and in some cases, releasing new games every 4 weeks. Here’s a look at the top 25 Facebook games as we enter what will surely be the biggest year for social gaming yet, from Inside Social Games: Interestingly, December was a mixed end to the year, as traffic stayed level or fell for most of the biggest Facebook games during December, according to AppData. 10 of the top 25 games saw decreases from December 1, 2009 to January 1, 2010.

How to Create Secret Codes and Ciphers: 14 steps Edit Article Sample Coded ParagraphsCodesCiphersSecret Languages Edited by General Jackson, Sarah Eliza, Teresa, Maluniu and 77 others Elcomeway otay yptographycray ithway ikihowway! Whether you're writing notes to your friends in class or trying to get into cryptography (the study of codes and ciphers) as a hobby, this article can help you learn some of the basics and get you on your way to encoding your own messages. Just see Step 1 below to get started! ScienceZine - CometBird One of the main quests of science throughout the ages has been to discover what matter is made of - and what holds it together. All matter is made out of many tiny particles called atoms . The study of how these atoms interact is called chemistry . Modern physics has discovered how atoms are made up of smaller particles and how these particles interact to build atoms into molecules and larger objects of matter.

PARANORMAL VIDEO PAGE ONE - SOME OF OUR EVIDENCE AND VIDEOS FROM ACROSS THE NET - GHOST VIDEO MOVIES Copyright © 2011 SPOOKS - Scientific Paranormal Observation Of Kinetic Spirits - All Right Reserved Strange “Mirror Distortion” caught on camera. (Watch mirror for shadow that moves from left to right) The Videos on this page represent some of the most compelling paranormal video evidence out there.