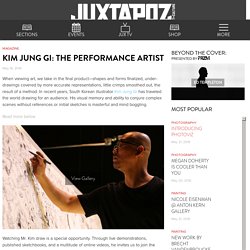 Kim draw is a special opportunity. Through live demonstrations, published sketchbooks, and a multitude of online videos, he invites us to join the process and witness his pictorial diary. We caught up with Mr. Kim during his recent European travels to talk about his work. —Aesop Rock Aesop Rock: I know that you first had an interest in wanting to pursue comic art in kindergarten. What was it about them that spoke to you more than, say, painting or other forms of picture making? Did you grow up around art and artists? What kinds of movies were your favorite now and as a kid? At what age did you notice your visual memory begin to catalog things well enough to recall them as you do? What objects give you the most trouble? What gave you the idea to travel around drawing in front of people instead of just showing completed works? Subsequently, people became interested and they started to invite me places. Is there a difference for you between drawing for a crowd and drawing alone?

Snow White. Pussy_big.jpg (Image JPEG, 798x600 pixels) Home : Okudart. John Baldessari "It's Possible, Although.." @ Sprueth Magers. Over the past 50 years, no one has come to epitomise the visual arts in Los Angeles more than John Baldessari. 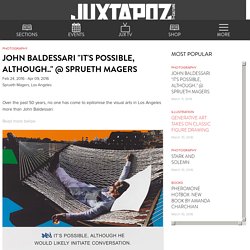 With his vibrant wit and his vast and unclassifiable oeuvre, which includes painting, photography, sculpture and video, he has become a hugely influential artist, while his generosity and brilliance as a teacher has made him a beloved figure among generations of students. Sprüth Magers has been exhibiting John Baldessari for almost 30 years, and we are delighted to open our Los Angeles gallery with one of the west coast’s greatest living artists. From his earliest text paintings in the late 1960s to his recent ‘storyboard paintings’, John Baldessari has always revelled in the playful dislocation between text and image. 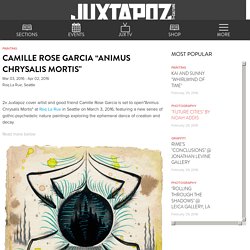 "For this body of work I was inspired by the surrealist and deeply symbolic films of Alejandro Jodorowsky, Jungian archetypes, and Greek mythology. I created a personal language of symbols, then made a card set and selected at random a different set for each new painting. This method taps into the elements of subconscious influence and chance, as well as mirrors the cut-up method of writing created by one of my favorite authors William Burroughs.From these subconscious suggestions I created a lush and layered symbolic world that explores the realm of childhood, memory and longing. 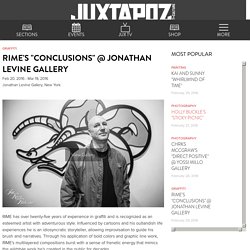 Influenced by cartoons and his outlandish life experiences he is an idiosyncratic storyteller, allowing improvisation to guide his brush and narratives. Through his application of bold colors and graphic line work, RIME’s multilayered compositions burst with a sense of frenetic energy that mimics the wildstyle work he’s created in the public for decades.

Social relationships are the main source of inspiration for RIME’s work. Focus: African Perspectives @ Armory Show, NYC. In 2008, when Juxtapoz published our survey on contemporary African art, issue curator Simon Njami wrote in his introductory essay, “The artists gathered in this issue all have Africa in common. 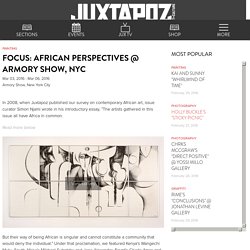 But their way of being African is singular and cannot constitute a community that would deny the individual.” Under that proclamation, we featured Kenya’s Wangechi Mutu, South Africa’s Mikhael Subotzky and Jane Alexander, Egypt’s Ghada Amer and Congolese artist Cheri Cherin, amongst others. "Pretty Creepy" @ Booth Gallery, NYC. Booth Gallery is set to open a great group show, "Pretty Creepy<" on March 4th in NYC with a cast of artists that rank as some of our favorites of the moment: Aaron Johnson, Balint Zsako, Barnaby Whitfield, Chris Gullander, Christian Rex van Minnen, Dawn Frasch, Irena Jurek, Jade Mac Townsend, Jennifer Caviola, Jenny Morgan, Marci Washington and Rebecca Morgan. 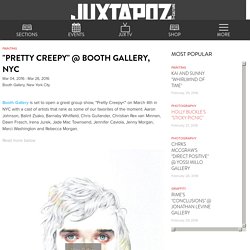 An ode to “beautifully grotesque” visual languages, the exhibit references Italian writer and critic Umberto Eco’s book “On Ugliness,” an exploration of the monstrous, evil and darkness and its seductiveness in art and literature. “What links the works in this exhibition to one another is a common desire to investigate the ‘cult of ugliness’ in a world where there’s nothing left to hide,” says artist Barnaby Whitfield. The figurative imagery and technical mastery of these artists becomes a means to subvert the current canons of beauty. Electric Visions. Thick Paint. Vancouver-based Kim Dorland paints landscapes and portraits, drawing on material from his past—sometimes infused with nostalgia, sometimes darkness. 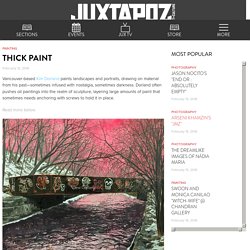 Dorland often pushes oil paintings into the realm of sculpture, layering large amounts of paint that sometimes needs anchoring with screws to hold it in place.