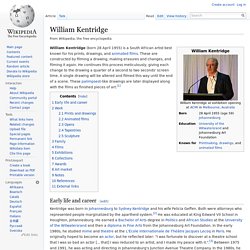 These are constructed by filming a drawing, making erasures and changes, and filming it again. He continues this process meticulously, giving each change to the drawing a quarter of a second to two seconds' screen time. A single drawing will be altered and filmed this way until the end of a scene. These palimpsest-like drawings are later displayed along with the films as finished pieces of art.[1] Early life and career[edit] Kentridge was born in Johannesburg to Sydney Kentridge and his wife Felicia Geffen. Work[edit] As someone who is ethnically Jewish in South Africa, he has a unique position as a third-party observer.

Aspects of social injustice that have transpired over the years in South Africa have often become fodder for Kentridge's pieces. The title, Casspirs Full of Love, written along the side of the print, is suggestive of the narrative and is oxymoronic. Automatic Writing - William Kentridge. Edward Ruscha. Jackson Pollock. Wayne Thiebaud. Wayne Thiebaud (born November 15, 1920) is an American painter best known for his colorful works depicting commonplace objects—pies, lipsticks, paint cans, ice cream cones, pastries, and hot dogs—as well as for his landscapes and figures. 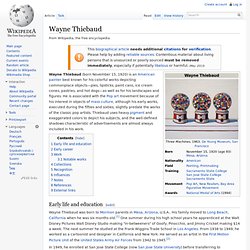 He is associated with the Pop art movement because of his interest in objects of mass culture, although his early works, executed during the fifties and sixties, slightly predate the works of the classic pop artists. Thiebaud uses heavy pigment and exaggerated colors to depict his subjects, and the well-defined shadows characteristic of advertisements are almost always included in his work. Early life and education[edit] Wayne Thiebaud was born to Mormon parents in Mesa, Arizona, U.S.A.. His family moved to Long Beach, California when he was six months old.[1] One summer during his high school years he apprenticed at the Walt Disney Pictures Walt Disney Studio making "in-betweeners" of Goofy, Pinocchio, and Jiminy Cricket making $14 a week. Richard Diebenkorn. 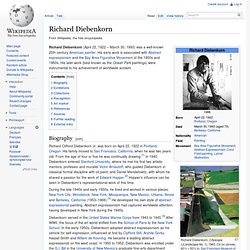 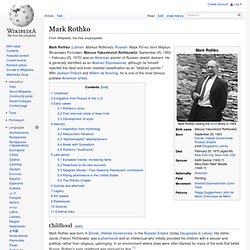 He is generally identified as an Abstract Expressionist, although he himself rejected this label and even resisted classification as an "abstract painter. " With Jackson Pollock and Willem de Kooning, he is one of the most famous postwar American artists. Brice Marden. Life[edit] Brice Marden, The Dylan Painting, 1966/1986, San Francisco Museum of Modern Art Brice Marden, For Pearl, 1970, 8 x 8 feet, Private Collection. 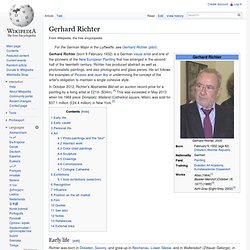 Richter has produced abstract as well as photorealistic paintings, and also photographs and glass pieces. His art follows the examples of Picasso and Jean Arp in undermining the concept of the artist's obligation to maintain a single cohesive style. In October 2012, Richter's Abstraktes Bild set an auction record price for a painting by a living artist at £21m ($34m).[4] This was exceeded in May 2013 when his 1968 piece Domplatz, Mailand (Cathedral square, Milan) was sold for $37.1 million (£24.4 million) in New York.[5]