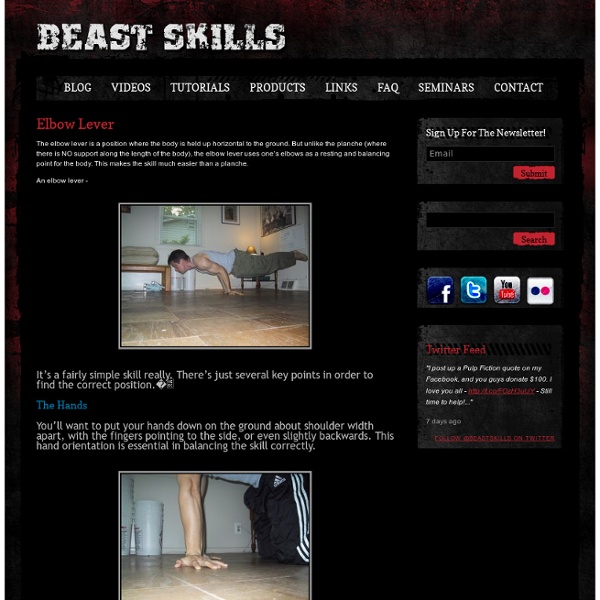 The elbow lever is a position where the body is held up horizontal to the ground. But unlike the planche (where there is NO support along the length of the body), the elbow lever uses one’s elbows as a resting and balancing point for the body. This makes the skill much easier than a planche. An elbow lever - It’s a fairly simple skill really. There’s just several key points in order to find the correct position.۬ The Hands You’ll want to put your hands down on the ground about shoulder width apart, with the fingers pointing to the side, or even slightly backwards. The Elbow Stab What’s this about stabbing? As you can see from the picture above, you’ll be placing your elbows to either side of the middle. The picture below shows a single elbow stab into the correct position. ۬If you were to take one arm and stretch it across your body like so, then you can easily find the correct position. You can also work the traditional shoulder stretch to help any flexibility problems. The Start The End

Top 20 Bodyweight Exercises For Building Muscle & Strength Bodyweight exercises need to be part of your program if you want to get jacked. But not just pushups, sit ups and high rep calisthenics. That’s beginner stuff that won’t build any real muscle. We’re talking about really working hard on high tension, advanced bodyweight exercises that can only be done for somewhere between five and ten reps, on average.

MAX Workouts by Shin Ohtake - High-Intensity Workout Routines That Get You Lean & Fit, Fast! Here are the 6 WORST things you can do if you want to ignite your body's own fat-burning furnace and get lean, strong & totally ripped in less time: Mistake #1:Doing Isolated Exercises Doing isolated exercises like bicep curls and tricep kick-backs will NOT get you any significant results. These one-muscle-at-a-time moves simply don't stimulate enough muscle fibers to build lean muscle or expend enough energy to maximize your calorie burn.

7 Day Detox - Weight Loss Diet Plan - Detox Diets In my quest to strike a middle ground between eating out and eating sprouts, I’ve done GOOP’s liquid harvest (yay!) and I’ve gone gluten free (boo!). GOOP’s veggie-heavy eating made me a ball of energy who came thisclose to grabbing people on the L train and telling them, “TRY THIS! IT WILL CHANGE YOUR LIFE!” Conversely, for someone who’s spent 30+ years pretending Yellow #7 is an ingredient, a gluten-free diet proved too extreme against bad, but solid, habits. The best hangover cures Food & Drinks We all know the head-bursting pain after a night of proper drinking. Therefore we give you this top 11 hangover cures. Enjoy the benefits! 11.

The Spartacus Workout Three years ago, producers at Starz asked Men’s Health to create a workout worthy of the name Spartacus, the network’s hit original series. With the help of Rachel Cosgrove, C.S.C.S., an Ironman triathlete and 2012 personal trainer of the year, we did just that—and it became the most popular workout in Men’s Health history! Now we’ve made it even better. Cosgrove’s newest version of the Spartacus Workout is called the Triple Set Scorcher. It uses triple sets to fire up your metabolism and melt flab at a blistering pace. - StumbleUpon A great tip is an awesome thing. Whether it's an undiscovered restaurant, a sleeper stock, or a Sure Thing in the late double at Pimlico, savvy inside info imbues a man with confidence. Control. Strength. Knowledge is power, baby. It's also the secret to a powerful body, as you're about to find out.

Right, Left Brain Conflict Say out loud the COLOR, not the word. This is a conflict between right and left sides of your brain. The right side tries to say the color while the left side of the brain insists on reading the word. Is this seven-minute workout all you need? Try this 12-move exercise regime that requires no equipment and about seven minutes. The abbreviated workout, published in the May-June issue of the American College of Sports Medicine’s Health & Fitness Journal, also includes lunges, push-ups and triceps dips. The researchers believe it’s an efficient way to get aerobic and strength training in one. Chris Jordan, director of exercise physiology at the Human Performance Institute in Orlando, Fla. and one of the authors of the article, says his abbreviated workout uses simple but challenging moves that create high-intensity intervals. He says that for years, a growing body of research has expanded on the benefits of this “highly efficient” mode of training. “Established research has proven that it works,” says Jordan.

Hiking in the Dark Hiking in the dark sounds bold, dangerous and exciting. And, it is. Anyone can hike Runyon Canyon during the day- but what’s the fun in that? Speed Up Your Metabolism Not happy with the metabolism you've got? These strategies—for mealtime, gym time, downtime and bedtime—will help you put the pedal to the metal. Pick protein "Protein is the building block of muscle," says Roberta Anding, R.D., a spokeswoman for the Academy of Nutrition and Dietetics (formerly the American Dietetic Association). "The more lean muscle you have, the more calories you expend." The Best Of The Best: Here Are 20 Gems Of Wisdom You Need To Know Think of this list as the Academy Awards of getting bigger, stronger and leaner: It’s a collection of tips that represent total domination in the gym. Each “best” selection was chosen based on either bona fide scientific data, overwhelming anecdotal evidence by hardcore gym rats around the world or both. Looking for the best way to add thickness to your arms, carve out a six-pack or throw around more weight than you ever have? You’ll find the answer here. 1) Best For Big Biceps: Barbell Curl While variety is key to developing well-balanced arms, we suggest you stick mainly with straight barbell curls and use the EZ-bar just once in a while for a change.