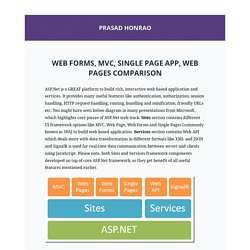 It provides many useful features like authentication, authorization, session handling, HTTP request handling, routing, bundling and minification, friendly URLs etc. You might have seen below diagram in many presentations from Microsoft, which highlights core pieces of ASP.Net web stack. Sites section contains different UI framework options like MVC, Web Page, Web Forms and Single Pages [commonly known as SPA] to build web based application. Services section contains Web API which deals more with data transformation in different formats like XML and JSON and SignalR is used for real-time data communication between server and clients using JavaScript. Please note, both Sites and Services framework components developed on top of core ASP.Net framework, so they get benefit of all useful features mentioned earlier. 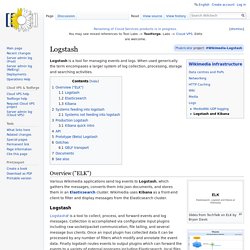 When used generically the term encompases a larger system of log collection, processing, storage and searching activities. Overview ("ELK") Slides from TechTalk on ELK by Bryan Davis Slides from TechTalk on Kibana4 by Bryan Davis Various Wikimedia applications send log events to Logstash, which gathers the messages, converts them into json documents, and stores them in an Elasticsearch cluster. 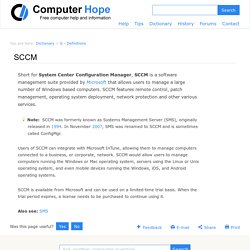 Capistrano (software) Capistrano is an open source tool for running scripts on multiple servers; its main use is deploying web applications. 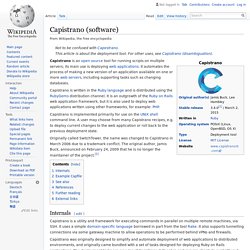 It automates the process of making a new version of an application available on one or more web servers, including supporting tasks such as changing databases. Capistrano is implemented primarily for use on the UNIX shell command line. A user may choose from many Capistrano recipes, e.g. to deploy current changes to the web application or roll back to the previous deployment state. Originally called SwitchTower, the name was changed to Capistrano in March 2006 due to a trademark conflict. The original author, Jamis Buck, announced on February 24, 2009 that he is no longer the maintainer of the project.[2] Docker (software) How Docker Fits Into The DevOps Ecosystem - The New Stack. It’s hard for me not to write about the Docker container technology when there are so many developments to follow. 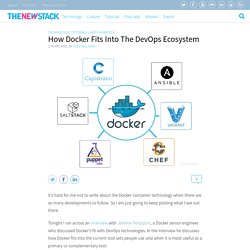 So I am just going to keep posting what I see out there. What Is: Back-End Web Development. Matt Jording is a software developer and an Instructor at General Assembly (with a great mustache). 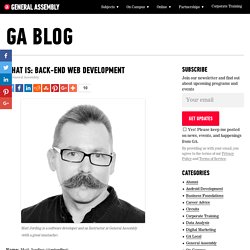 Name: Matt Jording (@mjording)Occupation: Software Developer. Getting Started with Front-End Web Development. So, you want to learn to code? 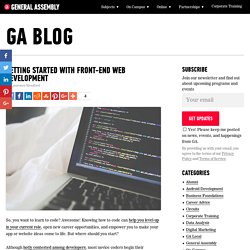 Awesome! Knowing how to code can help you level-up in your current role, open new career opportunities, and empower you to make your app or website ideas come to life. Deconstructed: What Is Full-Stack Web Development? Not long after I changed careers to become a full-stack web developer, I received an odd Facebook message from a family friend. 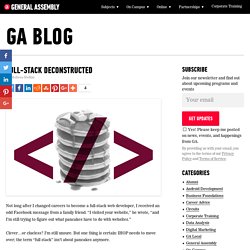 “I visited your website,” he wrote, “and I’m still trying to figure out what pancakes have to do with websites.” Clever…or clueless? I’m still unsure. But one thing is certain: IHOP needs to move over; the term “full stack” isn’t about pancakes anymore. The 8 Most In-Demand Programming Languages of 2016. In 2012, Venture capitalist Marc Andreessen famously declared, “Software is eating the world.” 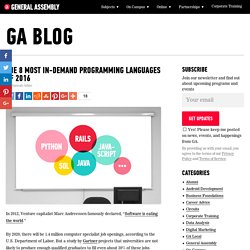 By 2020, there will be 1.4 million computer specialist job openings, according to the U.S. Department of Labor. But a study by Gartner projects that universities are not likely to produce enough qualified graduates to fill even about 30% of these jobs. This means that the door is wide open for individuals who do not have a traditional background in computer science to learn how to code.

Scala (programming language) Although Scala had extensive support for functional programming from its inception, Java remained a mostly object oriented language until the inclusion of lambda expressions with Java 8 in 2014. 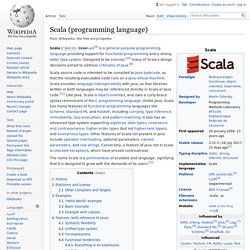 The Hello World program written in Scala has this form: object HelloWorld extends App { println("Hello, World! ") } When the program is stored in file HelloWorld.scala, the user compiles it with the command $ scalac HelloWorld.scala. System Center Configuration Manager. SMS went through three major iterations: The 1.x versions of the product defined the scope of control of the management server (the site) in terms of the NT domain being managed.Since the 2.x versions, that site paradigm has switched to a group of subnets that will be managed together.Since SMS 2003, the site could also be defined as one or more Active Directory sites. The most frequently used feature is inventory management,[citation needed] which provides both hardware and software inventory across a business enterprise.

.NET Framework. .NET Framework (pronounced dot net) is a software framework developed by Microsoft that runs primarily on Microsoft Windows. It includes a large library and provides language interoperability (each language can use code written in other languages) across several programming languages. Programs written for .NET Framework execute in a software environment (as contrasted to hardware environment), known as the Common Language Runtime (CLR), an application virtual machine that provides services such as security, memory management, and exception handling. The class library and the CLR together constitute .NET Framework. Apache Hadoop. Apache Hadoop ( /həˈduːp/) is a collection of open-source software utilities that facilitate using a network of many computers to solve problems involving massive amounts of data and computation.

It provides a software framework for distributed storage and processing of big data using the MapReduce programming model. Originally designed for computer clusters built from commodity hardware[3]—still the common use—it has also found use on clusters of higher-end hardware.[4][5] All the modules in Hadoop are designed with a fundamental assumption that hardware failures are common occurrences and should be automatically handled by the framework.[2] Amazon Web Services. Amazon Web Services (AWS) is a subsidiary of Amazon.com that provides on-demand cloud computing platforms to individuals, companies and governments, on a paid subscription basis.

The technology allows subscribers to have at their disposal a virtual cluster of computers, available all the time, through the Internet. AWS's version of virtual computers emulate most of the attributes of a real computer including hardware (CPU(s) & GPU(s) for processing, local/RAM memory, hard-disk/SSD storage); a choice of operating systems; networking; and pre-loaded application software such as web servers, databases, CRM, etc. Each AWS system also virtualizes its console I/O (keyboard, display, and mouse), allowing AWS subscribers to connect to their AWS system using a modern browser. The browser acts as a window into the virtual computer, letting subscribers log-in, configure and use their virtual systems just as they would a real physical computer. History[edit] Scala (programming language) PLAY (Google) Developer Console. The Google Play Developer Console is your home for publishing operations and tools. Upload apps, build your product pages, configure prices and distribution, and publish.

Representational state transfer. Http - What exactly is RESTful programming? What is REST API?