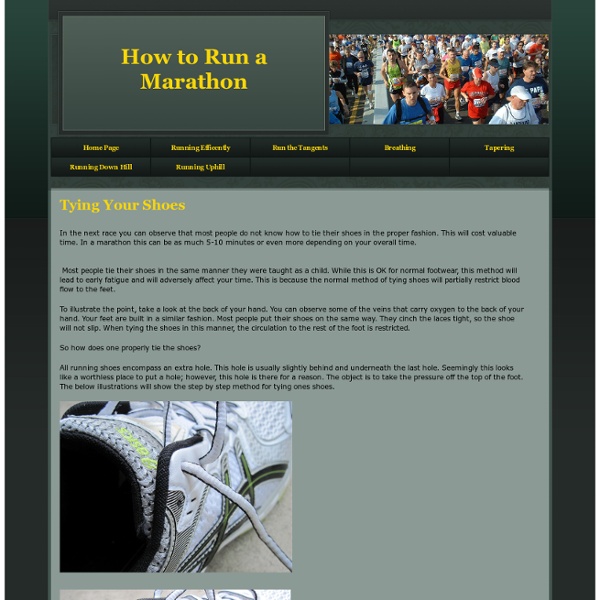 During your next race, take time to observe how most runners do not tie their running shoes correctly. This will cost valuable time; in a marathon this can be as much five to 10 minutes, or even more, depending on your overall time. Most people tie their shoes in the same manner they were taught as a child. This practice is fine for normal footwear, but tying running shoes like this will lead to early fatigue, thereby adversely affecting your time. To illustrate the point, take a look at the back of your hand. So, how do you properly tie your shoes?

7 Training Ideas That Changed My Running Forever By Jason Fitzgerald (via) Over the last 13 years of competitive running in high school, college, and beyond, I’ve picked up certain training strategies that I’ve incorporated into my current training. Some of these training principles are well-known while others are less common. Many of us know that we should do a long run every week but we don’t do it. Most of recognize that we should do some core and strength exercises every week, but a lot of us don’t. After you read this, I want you to make ONE positive change in your training. In typical Strength Running fashion, this post is long but packed with as much tactical information as I can provide. The Almighty Long Run It doesn’t matter if you’re training for a 5k, triathlon, or ultramarathon – the long run is one of your most important workouts of the week. The long runs boosts your aerobic capacity and allows you to run faster for longer. For all new runners, the biggest limiting factor for their performance is a lack of endurance.

Bootcamp App Exercise Descriptions « Couch to 5K Having trouble remembering the exercises? Don’t worry, with time you’ll know them all by heart, especially if you’re working out regularly. Here is a break down of Bootcamp’s exercises in each of the four categories. My 5 and 2 year old LOVE when we workout together with this app. Download the app now to your iPhone and iPod Touch to get your heart pumping and body moving! Visit www.bootcampapp.com for more app details. Like us on Facebook! Please feel free to contact me with any of your questions or suggestions support@runhelper.com Like this: Like Loading...

Glass Half Empty What if a glass of water was, all of a sudden, literally half empty? —Vittorio Iacovella The pessimist is probably more right about how it turns out than the optimist. When people say “glass half empty”, they usually mean something like a glass containing equal parts water and air: Traditionally, the optimist sees the glass as half full while the pessimist sees it as half empty. This has spawned a zillion joke variants—e.g., the engineer sees a glass that’s twice as big as it needs to be, the surrealist sees a giraffe eating a necktie, etc. But what if the empty half of the glass were actually empty—a vacuum? The vacuum would definitely not last long. For our scenario, we’ll imagine three different half-empty glasses, and follow what happens to them microsecond by microsecond. In the middle is the traditional air/water glass. We’ll imagine the vacuums appear at time t=0. For the first handful of microseconds, nothing happens. When the bottle is struck, it’s pushed suddenly downward.

Gmaps Pedometer The Dollar Shave Club - The best marketing video ever | Full Trending Tired of those sissy girl razor commercials with Roger Federer and Tiger Woods? How about the ones with Andre 3000 and Adrien Brody? Yeah me too, just disgusting. Luckily with the help of a friend I stumbled across this hilarious video of a man’s razor. Or something. This guy who looks like Dennis from Always Sunny in Philadelphia does a great job pitching, walking, and swinging a machete. Thanks Mike! more: Dollar Shave Club

Backpacks Infographic: How to Find the Right Backpack - REI - StumbleUpon Need a break from the daily multitasking merry-go-round? Trade in your digital devices for boots and backpacks—they're your ticket to off-the-grid adventures and the wonders of the backcountry! With the right pack and a little preparation, you can head out for a day hike or a through-hike and say "CUL8R" to the daily grind. Add this infographic to your website by copying the code below: <p><a href=" mental_floss Blog & 8 Secrets From the Wonderful World of Disney 1. There Are Human Remains in the Haunted Mansion The Haunted Mansion ride at Disneyland is one of the scariest places in the park, but not for the reasons you’d expect. In his 1994 book Mouse Tales , former Disney employee David Koenig tells the story of a tourist group that requested a little extra time on the ride so they could hold a quick memorial for a 7-year-old boy. This wasn’t an isolated incident. 2. Each night at Disneyland, after the sunburned families and exhausted cast members have made their way home, the park fills up again—this time, with hundreds of feral cats. Park officials love the felines because they help control the mouse population. Today, there are plenty of benefits to being a Disney-employed mouser. 3. Just before the final, five-story drop on Splash Mountain, Disney cameras take a snapshot of the riders to catch their facial expressions. 4. Even though Walt Disney had a mustache himself, he wanted his employees clean-shaven. 5. So, that’s what Florida did. 6.

Strategies for Writing a Conclusion Introduction From the parking lot, I could see the towers of the castle of the Magic Kingdom standing stately against the blue sky. To the right, the tall peak of The Matterhorn rose even higher. From the left, I could hear the jungle sounds of Adventureland. this isnt happiness&#8482; (Things My Father didn't Teach Me, How to tie a Tie)&& - StumbleUpon ABOUT ARCHIVE FOLLOW Facebook Twitter Instagram Google+ Ads Via The Deck Things My Father didn’t Teach Me, How to tie a Tie share it 3,740 notes