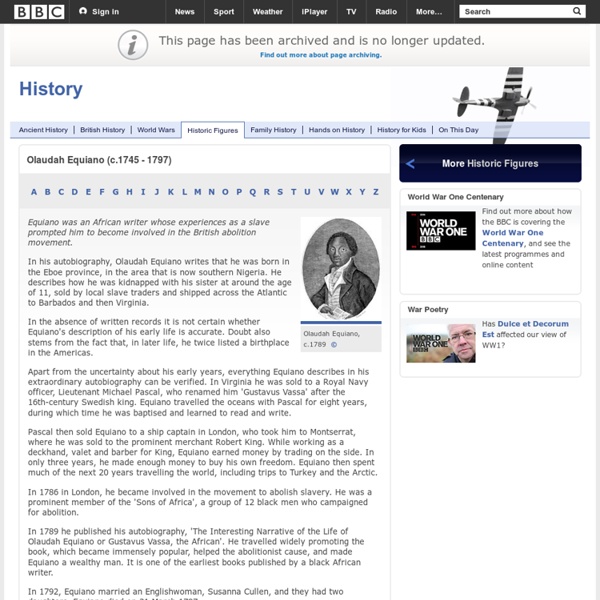 Mary Seacole (1805 - 1881) Olaudah Equiano (c.1745-1797): The Former Slave, Seaman & Writer: The Abolition of Slavery Project Olaudah Equiano, was a former enslaved African, seaman and merchant who wrote an autobiography depicting the horrors of slavery and lobbied Parliament for its abolition. In his biography, he records he was born in what is now Nigeria, kidnapped and sold into slavery as a child. He then endured the middle passage on a slave ship bound for the New World. After a short period of time in Barbados, Equiano was shipped to Virginia and put to work weeding grass and gathering stones. In 1757, he was bought by a naval captain (Captain Pascal) for about £40, who named him Gustavas Vassa. He served Pascal during naval campaigns in Canada and then in the Mediterranean. He came to London before returning to sea, working as an able seaman, steward and, once, as acting captain. In 1775, he travelled to the Caribbean and became involved in setting up a new plantation colony on the coast of Central America. Equiano knew that one of the most powerful arguments against slavery was his own life story.

Maharaja Dalip Singh I1843 after the violent upheavals in the Punjab caused by the death of Ranjit Singh, his only remaining son, the seven-year-old Dalip Singh, became Maharaja. After the Anglo-Sikh war and the annexation of the Punjab by the British in 1849, Dalip Singh was separated from his mother, Rani Jindan. She was regarded by the British as a dangerous influence on the young boy. He was given into the care of Dr John Login and they moved to Fategarh, a remote provincial town in north India. Removed from his cultural roots and living in a predominantly Christian household, Dalip Singh converted to Christianity. Soon afterwards, Lord Dalhousie gave him permission to travel to London. He arrived in 1854, quickly gaining a royal audience and an invitation to stay with the Royal Family at Osborne, where Queen Victoria sketched him playing with her children and Prince Albert photographed him. Later in life, as he became increasingly embittered about the loss of his kingdom, he reconverted to Sikhism.

Thomas Clarkson campaigner for abolition | Revealing Histories Thomas Clarkson campaigner for abolition Leading anti-slavery activist Thomas Clarkson was a leading activist in Britain against the transatlantic slave trade. He helped found the Committee for the Abolition of the Slave Trade and was a main force in bringing about the Slave Trade Act of 1807, which legally ended British trade in enslaved Africans. Clarkson was born in Wisbech, Cambridgeshire, England in 1760. In 1785, Cambridge University held an essay competition on the subject 'Is it right to make men slaves against their wills?'. 'A direct revelation from God ordering me to devote my life to abolishing the trade'. Clarkson contacted Granville Sharp, a known anti-slavery campaigner. Evidence of inhumanity of slavery Thomas Clarkson was responsible for collecting information to support the abolition of the transatlantic slave trade. Lectures in Manchester There was clearly a not insignificant black population in Manchester and the north west at the time. Dedication to the cause

Princess Sophia Duleep Singh Things you may not know about Princess Sophia Duleep Singh Sophia had Indian, European and African ancestry. More Her father came from the Punjab in India and her mother the daughter of a German father and Abyssinian mother. Her mother had grown up in Cairo and spoke at first only Arabic Her father presented Queen Victoria with the famous Koh-i-noor diamond. The young deposed Maharaja Duleep Singh was sent to England at the age of 12. Sophia was given a house by the queen. In 1896 Princess Sophia was given the very grand, three-storey Faraday House by Queen Victoria along with an allowance of £200 for the upkeep of the house. She had keys to a Royal palace. Princess Sophia lived opposite Hampton Court Palace and was given a set of keys to the Royal gardens so she could walk her dogs there. The princess was seen as something of a fashion icon. In 1908 Sophia wore an outfit to a party held by the countess of Jersey, a dress of maize-coloured voile and a large straw hat.

History - British History in depth: William Wilberforce: The Real Abolitionist? James Peters the 1st black Rugby Player James Peters (August 1879 – 26 March 1954) was an English rugby union player and, later, a rugby league player. He is notable as the first black man to play rugby union for England. He was also known as “Darkie Peters”. James Peters’s Jamaican father, George, had been mauled to death in a training cage by lions. His mother was Hannah Gough from Wem in Shropshire. He found himself in Fegan’s orphanage in Southwark and the Little Wanderers’ Home in Greenwich. Peters worked in printing and his trade brought him to Bristol, where we played for Bristol Rugby Club. He played rugby union for Devon, and in 1906 was to play the South Africans in front of 20,000 fans at the Plymouth County ground. In 1906, England played South Africa for the first time; James Peters was withdrawn from the England squad after the South Africans objected to playing against a black player. On 17 March 1907, Peters played for England against Scotland.

The Use of Petitions Sislin Fay Allen Britain’s First Black Policewoman Sislin Fay Allen was an inspiration for many when she became the Metropolitan Police’s first black female police officer, based at Croydon in the late 1960s. In 1968, Sislin Fay Allen, a nurse at Croydon’s Queens Hospital, became Britain’s first Black policewoman. Sislin Fay Allen was flicking through a newspaper in 1968 when she saw an advert for male and female police officers to which she replied. At the time there were no black female officers so the mum-of-two sat down and wrote an application. Within a few weeks Sislin had made it to the interview stage, shocking her husband and family when she was accepted. “On the selection day there were so many people there, the hall was filled with the young men. “I can remember one friend said, `Oh they wouldn’t accept you, they don’t accept Black people in the force’, and so I said `Well my dear, I’ve got news for you’ and I showed her the letter.” “The first day on the beat in Croydon was daunting, but it wasn’t too bad because

Opposition to the Society