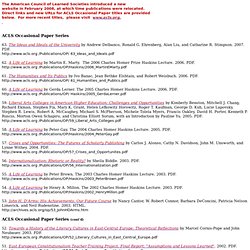 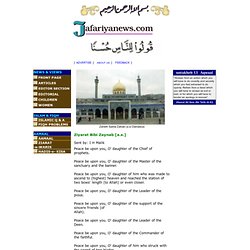 The ziyarat (verbal salutation) for Sharikah-tul-Hussein Hazrat Sayyidah Zainab (S), the daughter of Hazrat Imam Ali Al-Murtaza (A) and Hazrat Sayyidah Fatimah Zahra (S), is recited while pilgrimage to her holy shrine, on the days of her birth, martyrdom, and during the month of Muharram-ul-Haram to obtain divine blessing: 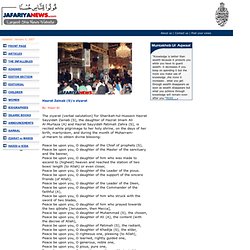 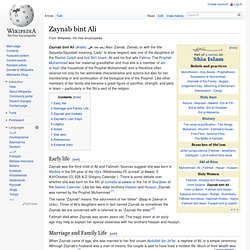 Three of Ali’s daughters were in fact named Zaynab so sometimes the Zaynab we are concerned with is referred to as “Zaynab the elder”[2] Fatimah died when Zaynab was seven years old. This tragic event at an early age may help to explain her special closeness with her brothers Hassan and Husayn. Marriage and Family Life[edit] When Zaynab came of age, she was married to her first cousin Abdullah ibn Ja'far, a nephew of Ali, in a simple ceremony. The marriage of Zaynab did not diminish her strong attachment to her family. Some sources suggest that Zaynab held sessions to help other women study the Qur'an and learn more about Islam. Ziyarat. Ziyārat can also refer to a form of supplication made by the Shia, in which they send salutations and greetings to Muhammad and his family.[1] Pilgrimage sites[edit] Different Muslim-majority countries, speaking many different languages, use different words for these sites where ziyarat is performed. 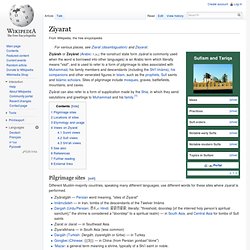 Locations of sites[edit] See List of Ziyarat sites Etymology and usage[edit] Sufi places of worship and retreat may be built near the graves of famous Sufi saints; they are often called khanqahs or tekkes. Views on Ziyarat[edit] Sunni views[edit] Sunni scholars declare that the purpose of visiting the graves and cemeteries is only to remind people of death and a curse be upon the Jews and Christians for taking the graves of their Prophets as places of worship.[2] Narrated By 'Aisha : Umm Salama told Allah's Apostle about a church which she had seen in Ethiopia and which was called Mariya.