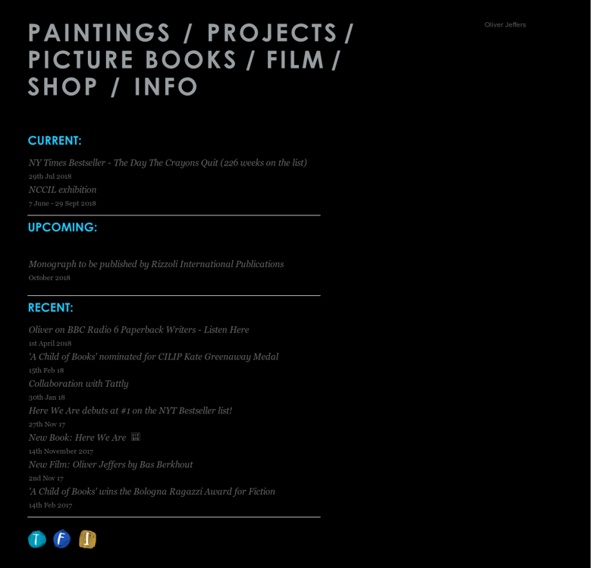 Julie Kagawa Julie Kagawa, the New York Times bestselling author of the Iron Fey and Blood of Eden series was born in Sacramento, California. But nothing exciting really happened to her there. So, at the age of nine she and her family moved to Hawaii, which she soon discovered was inhabited by large carnivorous insects, colonies of house geckos, and frequent hurricanes. She spent much of her time in the ocean, when she wasn’t getting chased out of it by reef sharks, jellyfish, and the odd eel. When not swimming for her life, Julie immersed herself in books, often to the chagrin of her schoolteachers, who would find she hid novels behind her Math textbooks during class.

clog: From the archives: SNEAK enCOUNTER exhibition Here's another set of images from way back: the SNEAK exhibition at our enCOUNTER window featuring work from recent NMIT graduates Tessa Blazey, Tae Schmeisser, Vanessa Maxim, Milly Flemming, Alex Bletsas, Elise Newman and Lia Tabrah. Tara Lofhelm OTT by Lia T. Elise Newman Alex Bletsas Author & Illustrator This was posted 2 days ago. It has 344 notes. some tests that Joe Schmidt and I did a few months back. Not for anything specific but they were really fun. This was posted 1 month ago. It has 1,177 notes.

Monsieur Qui - Illustrations + Street Art Cyril Foiret Frances Hardinge After she had won the 2015 Costa Book of the Year Award for The Lie Tree, an interviewer remarked to Frances Hardinge that not only was it the first children’s book to win the prestigious award since Philip Pullman’s The Amber Spyglass in 2001 but both books showed ‘a willingness to tackle complex moral issues and make them accessible to children’. Hardinge replied that ‘first and foremost, I tell stories’, however, she continued, ‘I tend to assume that young readers can understand quite a lot, so… some of my stories have included things that are actually quite dark’. She admitted also, ‘my books tend to be a bit of an odd mix’ and ‘I can’t quite control the impulse to fiddle and make things more odd’. In The Lie Tree, these dark things include the death by presumed suicide of its teenage heroine Faith’s father, the Reverend Erasmus Sunderly. As the book is set in the Victorian 1860s, this carries the threat of her family’s destitution if such a verdict is reached by the local coroner.

YVON LAMBERT Opening on Friday March 14th, 2014 No Drones March 14th – April 19th Louise Lawler, » Hand On Her Back », 1997-1998-2014 Woman With Sombrero Jill Magid, Women with Sombrero Author & Ilustrator Half the earth's surface is covered by water more than a mile deep, but most of this watery world is a mystery to us. In fact, more people have stood on the surface of the moon than have visited the deepest spot in the ocean. Come along as we travel down, down, down, from the surface to the bottom of the sea. PIERRE WINTHER / about Staged Reality by PIerre Winther He is the true definition of an artist in his work as a photographer and film director and has carried out his prestigious and powerful trademark style through numerous award-winning campaigns and projects. Pierre Winther is probably one of the most interesting photographers of the modern photography and takes pride in staying true to the original craft of photography.

Gordon Korman Fridgemania: the most creative fridge photos in the world. Fridgemania! Creative fridge photos compiled by Moncef Belyamani. 17,681 Tumblr followers. These photos are best enjoyed while listening to some fresh tunes. Apr 7, 2012 / 52 notes sulla strada (by Dario Lucarini) Author & Illustrator Bauhaus Dessau : Home : Stiftung Bauhaus Dessau / Bauhaus Dessau Foundation The legendary Bauhaus of Walter Gropius 1926 The Bauhaus has a special role to play in the history of 20th century culture, architecture, design, art and new media. As a School of Design, the Bauhaus revolutionised artistic and architectural thinking and production worldwide, and is considered a headstone of the Modern age, which may be visited in Dessau until nowadays. The Bauhaus building and the Masterhouses are daily open from 10am to 5pm New Bauhaus Museum Dessau is planned: Open international competition in two phases. All information regarding the competition are provided from now on here: www.bauhausmuseum-dessau.de +++ German Government supports a new Dessau Bauhaus Museum with the amount of 12.5 million Euros. +++ "We are delighted and happy with this decision.