Quiche. Kale. Greenbean casserole. Loaded Potato Soup Recipe. Barley soup. ChickenCocoCardo. Corn chowder. Tofu. Barackoli with garlic and lemon Recipes - Find a Healthy Recipe at Dr. Maring's Farmers' Market and Recipe Update. POSTED: January 17, 2009 I offer this recipe in honor of our new president and expect there will now be more vegetables like this served in the White House. 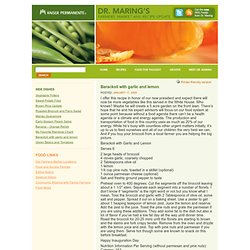 Who knows? Maybe he will create a 5 acre garden on the front lawn. There’s hope that he and his expert advisors will focus on our food system at some point because without a food agenda there can’t be a health agenda or a climate and energy agenda. The production and transportation of food in this country uses as much as 20% of our energy. Barackoli with Garlic and Lemon Serves 6 2 large heads of broccoli 4 cloves garlic, coarsely chopped 2 Tablespoons olive oil 1 lemon 1/4 cup pine nuts, toasted in a skillet (optional) 1 ounce parmesan cheese (optional) Salt and freshly ground pepper to taste Preheat oven to 400 degrees. Happy Inauguration Day Back to top.

Congee. Japanese dietary tips to prevent summer lethargy. Anyone who has spent a summer in Japan will likely be well- acquainted with natsubate, or “summer fatigue” — a general state of lethargy and tiredness, lack of concentration, sleeplessness and even mild depression. 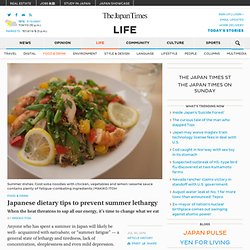 Dealing with the relentless heat and humidity, which only lets up slightly in the evenings, is enough to get anyone down. Air conditioning helps, but as it often blasts out unpleasantly over-chilly air in many public spaces, it sometimes ends up making you feel worse. Japanese people have come up with all kinds of ways of bringing relief to the dog days of summer, some of which go back to the times before air conditioning and electric fans.

There are the obvious ones, such as drinking iced mugicha (roasted barley tea) and cold beer or snacking on kakigori (shaved ice with syrup) and slurping up cold soba or somen noodles. But if not done carefully, subsisting on cold food and drink can actually end up leaving you malnourished and even more fatigued. Serves 2 to 4 1 tbs. sugar. Barley Salad with Mint, Dill, Cucumber, Raisins. Basics: Cold soba noodles with dipping sauce. I’ve updated this very popular article a little bit and pushed it up from the archives, since it is the season for cold noodles now. 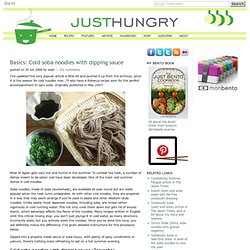 I’ll also have a followup recipe soon for the perfect accompaniment to zaru soba. Originally published in May 2007. Most of Japan gets very hot and humid in the summer. To combat the heat, a number of dishes meant to be eaten cold have been developed. One of the main cold summer dishes is cold noodles. Soba noodles, made of soba (buckwheat), are available all year round but are really popular when the heat turns unbearable. Dipped into a properly made sauce or soba tsuyu, with plenty of spicy condiments or yakumi, there’s nothing more refreshing to eat on a hot summer evening. Cold soba noodles with dipping sauce (Zarusoba) Note: zaru means basket - so these are soba served in a basket. To serve 4 people For the sauce (soba tsuyu): Combine the two in a pan and bring up to a simmer. The noodles: Ascent magazine. 844 is an organic and (mostly) vegetarian restaurant nestled between ramen shops and hostess bars in a back alley just off the main drag in central Kyoto. 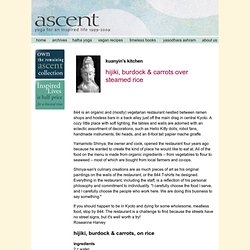 A cozy little place with soft lighting, the tables and walls are adorned with an eclectic assortment of decorations, such as Hello Kitty dolls, robot fans, handmade instruments, tiki heads, and an 8-foot tall papier mache giraffe. Yamamoto Shinya, the owner and cook, opened the restaurant four years ago because he wanted to create the kind of place he would like to eat at. All of the food on the menu is made from organic ingredients – from vegetables to flour to seaweed – most of which are bought from local farmers and co-ops. Shinya-san's culinary creations are as much pieces of art as his original paintings on the walls of the restaurant, or the 844 T-shirts he designed. Herbed Canellini Beans, Cherry Tomatoes, and Kale : Tied Up in the Kitchen.

Herbed Canellini Beans, Cherry Tomatoes, and Kale July 25th, 2009 This dish is great as a light and quick dinner for two, or as a quick dinner and lunch the next day. I got lucky and found some fresh “lime thyme” at the coop this week, so this dish had some extra special flavor - but any fresh thyme will work just as well. Beyond the thyme, I used a good amount of red pepper and a little cinnamon to the beans, so that they had some sweet and some heat. I served this dish warm but it also keeps perfect in the fridge and works well as a cold salad.