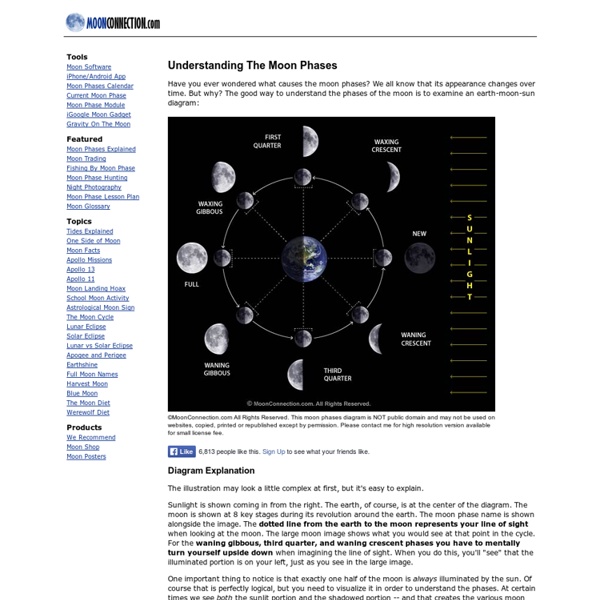 Have you ever wondered what causes the moon phases? We all know that its appearance changes over time. But why? The good way to understand the phases of the moon is to examine an earth-moon-sun diagram: ©MoonConnection.com All Rights Reserved. Diagram Explanation The illustration may look a little complex at first, but it's easy to explain. Sunlight is shown coming in from the right. One important thing to notice is that exactly one half of the moon is always illuminated by the sun. So the basic explanation is that the lunar phases are created by changing angles (relative positions) of the earth, the moon and the sun, as the moon orbits the earth. If you'd like to examine the phases of the moon more closely, via computer software, you may be interested in this moon phases calendar software. Moon Phases Simplified It's probably easiest to understand the moon cycle in this order: new moon and full moon, first quarter and third quarter, and the phases in between. The Moon's Orbit Moon Software

Australian Academy of Science - PrimaryConnections John Townley's AstroCocktail News Archive 2012 Older News Articles, newest first, oldest at bottom (some links may have expired...): Titanic Theories (NY Times) – A good Grey Lady wrap on winter Supermoons plus unusual local conditions that helped conspire to sink the famous ship…not to mention the novella that predicted it… Auspicious Times (SLBC) – Sri Lanka’s official astrologers are try to set straight the rumors that this year’s auspicious times might not be, in fact, auspicious…! Clock Error (Medill) – Could be Earth, and the rest of the planets, formed lots earlier than believed, by say, a mere 60 million years… A Billion Fools (WSJ) – That’s what India is – because it believes in astrology – according to one high court judge…the Subcontinent is not amused… Fantastic Art (Hemel Today) – That’s what this esthetic endeavor called “Astrology Circle”, soon to be exhibited in Vienna, is intended to be. Thalassaemia (Times Of India) – Match-making astrologers asked to make couples aware of this deadly genetic disease… Snowing Microbes?

Magnifying the Universe Embed this infographic on your site! <iframe width="500" height="323" scrolling="no" src=" frameborder="0" allowfullscreen></iframe><br />Copyright 2012. <a href=" the Universe</a> by <a href=" Sleuth</a>. The above is an interactive infographic. We have also developed a complimentary poster that you can view here: Sizes of the Universe poster. Introduction: This interactive infographic from Number Sleuth accurately illustrates the scale of over 100 items within the observable universe ranging from galaxies to insects, nebulae and stars to molecules and atoms. While other sites have tried to magnify the universe, no one else has done so with real photographs and 3D renderings. How To Use: Step 1:To experience this interactive infographic in full screen (our recommendation) click the "Full Screen" button in the top right corner of the infographic. Credits:

New Page 1 If the sun were so much larger than the earth, Aristarchus argued that it was likely to lie at the center of the planetary system, with the earth orbiting it. He appreciated the issue of parallax in this system and correctly proposed that the stars are very far away compared with the size of the orbit of the earth: "that the sphere of fixed stars is of such a size that the circle, in which he supposes the earth to move, has the same ratio to the distance of the fixed stars as the center of a sphere has to the surface." Despite the supporting observations regarding the size of the sun, Aristarchus' concept was ultimately rejected in favor of keeping the earth at the center of the system. Concept Development Maps <div class='noindex'>You may be trying to access this site from a secured browser on the server. Please enable scripts and reload this page.</div> Turn on more accessible mode Skip Ribbon Commands Skip to main content Emergency Closures Learning and Teaching Resources Concept Development Maps About the science concept development maps The science concept development maps have been adapted from the American Association for the Advancement of Science (AAAS) publication The Atlas of Scientific Literacy . The full resource may be purchased at AAAS ( The concept development maps represent possible developmental pathways students may take when developing scientific understandings. The maps represent pathways of student concept development across a number of areas of science. Also, it should be noted that the maps represent one ‘story’ about how knowledge develops in science. Navigating and using the maps Each concept supports other, more complex concepts.

Look on My Works, Ye Mighty, and Despair! « Burrito Justice Look on my works, ye Mighty, and despair! Shots from NASA’s Galileo space probe as it swung by the Earth and the Moon in 1992. (May take a minute to get going – click image for a larger version. Animation by Gordan Ugarkovic, via The Planetary Society.) Since the Mission is not actually visible in the above video, I will reuse this awesome shot of the earth rising over the horizon of the moon from Japan’s late Kaguya orbiter. Hopefully this puts some things in perspective. Next to the space program, infrastructure (specifically water and sewer systems) is likely our civilization’s crowning achievement. All of this is an excuse for me to publish this absolutely disgusting picture of what happens when you dump unnecessary crap down your drain, from our friends at the SF Sewers blog: You only appreciate this shit when it’s gone. Oh, and Merry Christmas. Like this: Like Loading...

The Cell: A Learning Tool This interactive learning tool was developed to help middle school students attain a greater understanding of the cell, cell organelles and their functions, and to improve retention of scientific knowledge in preparation for the State of California Standards exams in life science. Onscreen and off screen ("hands on") activities are provided in this learning tool on the cell. Off screen activities include printing outlines of the animal cell, which the students cut out, color, assemble, and label. Technologies used include Flash and XML. This is the third version of the project. Future versions will include, comparisons between cell types, improved quizzing features, and life science curriculum for higher levels of education. Archived Versions of The Cell Project at GalaxyGoo: The Cell, Version 7.0 Links to More Information on the Cell: Links to More Information on Education Standards:

Moon Phases Cycling GIF Information Details This document describes the camera used to capture the lunar images. It goes on to discuss the visual size of the moon in each image, the process of aligning the images & the software used to create the final animation. The image you see above is ½ the 300x300 actual size, while the 'end of section' images are ¼ of the images natural size. To see the image unscaled, visit the Moon Phases Animation page. Image Capture The images seen in the above animation were captured on a Kodak DX6490 Zoom Digital Camera at full (10x) Zoom. Visual Size The size of the moon image in each crop was slightly different. The moon is not in an entirely circular orbit around the Earth, it has an orbital eccentricity of 0.054. Aligning the Images The images were captured at slight different angles. Even when the images were aligned, rotated and resized to fit into the same visual space, there were differences introduced because of the north/south swing of the lunar orbit. Creating the Animation

NSDL Science Literacy Maps Earth And Moon Earth & Moon Animation It takes the Moon 27.322 days to go around the Earth once. Because of this motion, the Moon appears to move about 13° against the stars each day, or about one-half degree per hour. Moon's Orbit and Rotation If you could fly to the Moon at a constant speed of 1000 kilometers per hour, which is the speed of a fast passenger jet, it would take sixteen days to get there. When the Moon is at apogee, it is 11% farther from Earth than it is at perigee. Gravitational interaction (tides on the Earth caused by the Moon) transfers kinetic energy from Earth to the Moon, slowing Earth's rotation and raising the Moon's orbit, currently at a rate of 3.8 centimeters per year. Orbital characteristics - Moon