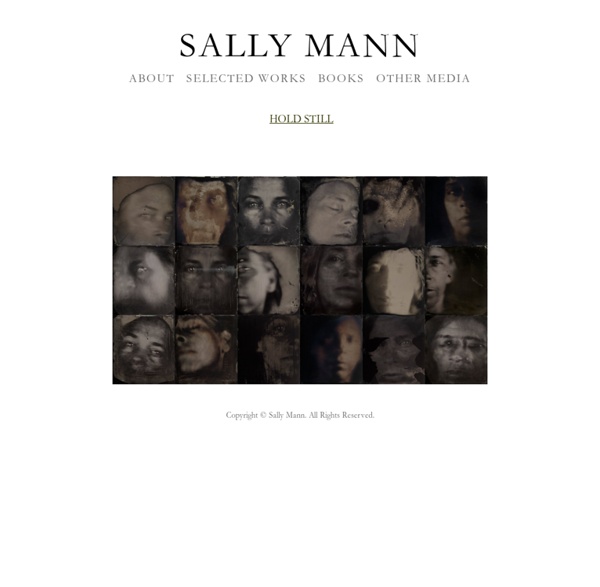 About me - Fikry Botros Photography is my passion. In the many photography related classes I have taken over the years, it never ceased to amaze me how we use basically the same tools: cameras and lenses, to produce such an infinite variety of images. The struggle, or the goal, of most photographers is to find their niche, a combination of what they are good at and what they naturally like. In my own experience, this took a while, and a lot of photos, to arrive at. As an engineer, I was predictably attracted to architecture, buildings, landscape and the like. Annie Liebovitz January 3rd, 2007 Annie Leibovitz Photo Gallery Get access to content from your local PBS station.Get sneak previews from some of your favorite shows including Masterpiece, Nova, etc.See what's on tonight at your local PBS station.

Annie Liebovitz Born in 1949 in Waterbury, Connecticut, Annie Leibovitz enrolled in the San Francisco Art Institute intent on studying painting. It was not until she traveled to Japan with her mother the summer after her sophomore year that she discovered her interest in taking photographs. When she returned to San Francisco that fall, she began taking night classes in photography. Time spent on a kibbutz in Israel allowed her to hone her skills further. In 1970 Leibovitz approached Jann Wenner, founding editor of Rolling Stone, which he’d recently launched and was operating out of San Francisco. Photojournalism — Brent Stirton KIKA, CAMEROON, JULY 2010: Members of the Baka Pygmy tribe, the original forest dwellers of the Cameroon forests, Kika, Cameroon, June 9, 2010. The Baka have small logging concessions of their own in community forest areas but are plaughed by a lack of education, logging equipment, access to markets and an addiction to alcohol fostered by their Bantu neighbours who ruled them for many years and who often pay the Baka for labor in alcohol. Logging roads and subsequent small towns created by logging concessions are bringing man and infrastructure further into the forest of Cameroon than ever before, Kika, Cameroon, June 5, 2010. This is severely threatening the great forests of the Congo Basin, one of the last great Forest reserves in the world. The Congo Basin forests cover an area the combined size of France and South Africa. The forests of Cameroon form a large part of this basin.

Robert Frank Robert Frank's fine flatulent black joke on American politics can be read as either farce or anguished protest. It is possible that Frank himself was not sure which he meant. In 1956, he was still a relative newcomer to the United States, and his basic reaction might well have been one of dumb amazement as he investigated the gaudy insanities and strangely touching contradictions of American culture. A similar shock has been experienced by many others who have been suddenly transplanted as adults to this exotic soil. A few artists and intellectuals have even managed to turn the experience to their creative advantage, if their direction had not yet been too firmly set, as though a new country might be a substitute for being born again. It is tempting to believe that Frank's emergence in the fifties as a photographer of profound originality was a measure of his success in meeting on artistic grounds the very difficult challenge of a radically new culture.

William Klein (photographer) William Klein (born April 19, 1928) is an American-born French photographer and filmmaker noted for his ironic approach[1][2] to both media and his extensive use of unusual photographic techniques in the context of photojournalism and fashion photography.[1] He was ranked 25th on Professional Photographer's list of 100 most influential photographers.[3] Klein has directed numerous short and feature-length documentaries and has produced over 250 television commercials.[5] Though American by birth, Klein has lived and worked in France since his late teens. His work has sometimes been openly critical of American society and foreign policy; the film critic Jonathan Rosenbaum once wrote that Klein's 1968 satire Mr.

Jay Mark Johnson (This section is not actively updated) “If the doors of perception were cleansed every thing would appear to man as it is, infinite. For man has closed himself up, till he sees all things through the narrow chinks of his cavern. - William Blake’s The Marriage of Heaven and Hell Hugo Jaeger Hugo Jaeger was the former personal photographer of Adolf Hitler. He travelled with Hitler in the years leading up to and throughout World War II and took around 2,000 colour photographs of the Austrian-born German politician. Jaeger was one of the few photographers who were using color photography techniques at the time.[1]

Gregg Segal By continuing to visit this site you agree to our use of cookies. Learn more Un-Daily Bread Daily Bread Wild Swimming The Public Pool Nan Goldin American photographer Nancy "Nan" Goldin (born September 12, 1953) is an American photographer. Her work often explores LGBT bodies, moments of intimacy, the HIV crisis, and the opioid epidemic. Her most notable work is The Ballad of Sexual Dependency (1986), which documents the post-Stonewall gay subculture and Goldin's family and friends.

David Bailey David Royston Bailey, CBE (born 2 January 1938) is an English photographer, regarded as one of the nation's best.[1][2] Early life[edit] David Bailey was born in Leytonstone, East London,[4] to Herbert Bailey, a tailor's cutter, and his wife, Gladys, a machinist. From the age of three he lived in East Ham.[5] "In the winter", he recalled, the family "would take bread-and-jam sandwiches and go to the cinema every night because in those days it was cheaper to go to the cinema than to put on the gas fire.

Ecosystem of Excess, 2014 - Pinar Yoldas This project starts in the Great Pacific Garbage Patch. Covering between 700000 and 15 million square kilometers, the site is a monument to plastic waste on a global scale. Referring to Kantian aesthetics, it is a truly ‘sublime’ kinetic sculpture built by all the nations around the Pacific Ocean through many years of mindless, unsustainable consumption. As environmental activist and discoverer of the Trash Vortex Captain Charles Moore boldly claims, ‘the ocean has turned into a plastic soup.’ From primordial soup to plastic soup, An Ecosystem of Excess asks a very simple question: ‘If life started today in our plastic debris filled oceans, what kinds of life forms would emerge out of this contemporary primordial ooze?’