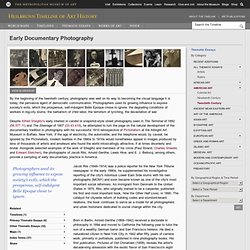 Goldsmith Foundation Gift through Joyce and Robert Menschel, and Gift of Ford Motor Company and John C. Waddell, by exchange, 1997 (1997.25) © 1997 Aperture Foundation Inc., Paul Strand Archive. The Rise of Paper Photography in 1850s France. In French photography, the 1850s was a decade of both dramatic technical change and great artistic flowering. 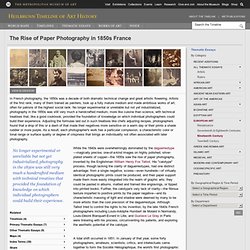 Artists of the first rank, many of them trained as painters, took up a fully mature medium and made ambitious works of art, often for patrons of the highest social rank. No longer experimental or unreliable but not yet industrialized, photography in the 1850s was still very much a handcrafted medium, more like cuisine than science, with technical treatises that, like a good cookbook, provided the foundation of knowledge on which individual photographers could build their experience. Adjusting the formulas laid out in such treatises like chefs adjusting recipes, photographers found that a drop of this or a dash of that made their negatives more sensitive on a warm day or their prints a shade ruddier or more purple.

A tidal shift occurred in 1851. The year 1851 was also pivotal in establishing the French government's role as photographic patron. Daguerre (1787–1851) and the Invention of Photography. The Pictures Generation. Young artists who came of age in the early 1970s were greeted by an America suffused with disillusionment from dashed hopes for political and social transformation to the continuation of the Vietnam War and the looming Watergate crisis. 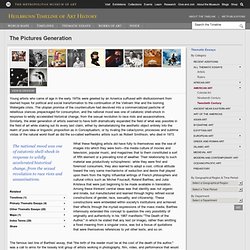 The utopian promise of the counterculture had devolved into a commercialized pastiche of rebellious stances prepackaged for consumption, and the national mood was one of catatonic shell-shock in response to wildly accelerated historical change, from the sexual revolution to race riots and assassinations. What these fledgling artists did have fully to themselves was the sea of images into which they were born—the media culture of movies and television, popular music, and magazines that to them constituted a sort of fifth element or a prevailing kind of weather.

The New Vision of Photography. The explosive development of photography as a medium of untold expressive power and as a primary vehicle of modern consciousness occurred during the two decades immediately following the Great War. 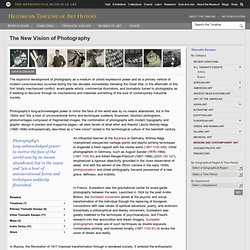 In the aftermath of this first totally mechanized conflict, avant-garde artists, commercial illustrators, and journalists turned to photography as if seeking to discover through its mechanisms and materials something of the soul of contemporary industrial society. Photography's long-acknowledged power to mirror the face of the world was by no means abandoned, but in the 1920s and '30s a host of unconventional forms and techniques suddenly flourished. An influential teacher at the Bauhaus in Germany, Moholy-Nagy championed unexpected vantage points and playful printing techniques to engender a fresh rapport with the visible world (1987.1100.499). Photography and Surrealism. Kodak and the Rise of Amateur Photography.

By far the most significant event in the history of amateur photography was the introduction of the Kodak #1 camera in 1888. 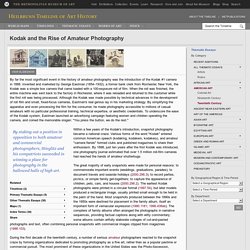 Invented and marketed by George Eastman (1854–1932), a former bank clerk from Rochester, New York, the Kodak was a simple box camera that came loaded with a 100-exposure roll of film. When the roll was finished, the entire machine was sent back to the factory in Rochester, where it was reloaded and returned to the customer while the first roll was being processed. Although the Kodak was made possible by technical advances in the development of roll film and small, fixed-focus cameras, Eastman's real genius lay in his marketing strategy. By simplifying the apparatus and even processing the film for the consumer, he made photography accessible to millions of casual amateurs with no particular professional training, technical expertise, or aesthetic credentials.

Within a few years of the Kodak's introduction, snapshot photography became a national craze.