Gnip is the Social Media API 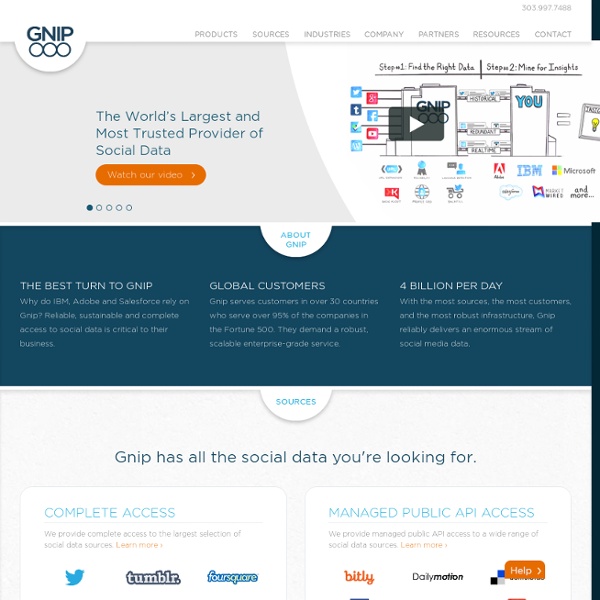 Gnip offers complete access to realtime streams of public data from the top social networks. We get every public activity from social networks like Twitter, Tumblr, and Wordpress, add in our own enrichments and then pass the data on to you, all in the blink of an eye. More about Firehose. PowerTrack is Gnip's enterprise-grade filtering language that gives you the ability to get complete coverage of the data you need. Filter on geo-boundaries, keyword and phrase matches, the presence of links or images, the language of an activity and much more. More about PowerTrack.

The Only Twitter Applications List You'll Ever Need Twitter is a status-updating or microblogging social networking website. It is a breakthrough in social networking because it takes communication into another level. Before, a person can only update his status (eg. what he’s doing, where he is) at a certain time. But with Twitter and it’s mobile integration, he can update his status almost all throughout the day and get in touch with people that matters to him the most. But the functions of Twitter do not stop there.

5 Predictions for Online Data In 2011 Josh Jones-Dilworth is the founder and CEO of Jones-Dilworth, Inc. a PR consultancy focused on bringing early stage technologies to market. He blogs at joshdilworth.com. A lot has changed since this post’s forbearer last December, so much so that I think it’s safe to say that data, particularly as it relates to marketing and social media, is no longer an annual topic, but rather a daily one. Below, I outline five data-driven trends that will shape our coming year. 1. “Data scientist” Is the New Community Manager

Twitter Search, Monitoring, & Analytics With iOS 9, Search lets you look for content from the web, your contacts, apps, nearby places, and more. Powered by Siri, Search offers suggestions and updates results as you type. There are two ways to use Search on your iOS device. Quick Search Drag down from the middle of the Home screen and type what you're looking for.

Slingshot Labs founders start fresh with BeachMint and new $5M Barely two months after leaving Slingshot Labs, News Corp’s incubator, the two men formerly running the show, Diego Berdakin and MySpace co-founder Josh Berman, have launched a shiny new venture: a social commerce site called BeachMint. Despite bare-bones information on what the Santa Monica, Calif. company will actually be doing, it just managed to raise $5 million from New Enterprise Associates and Anthem Venture Partners. According to the two well-known co-founders, BeachMint’s mission is to build an end-to-end e-commerce experience across multiple verticals. Each category would have its own recommendation engine, social media tie-ins to allow for sharing and viral marketing, and channels for big-time influencers like celebrities to air their opinions.

Try our popular and free Google Analytics "Sales Cockpit" dashboard This Google Analytics dashboard is perfect for Online retailers who need an overview of how their online business is performing. This “Sales cockpit” answers following questions:

Former MySpace Exec Teams With Yahoo Rock Star For New Startup MySpace’s former GM International Travis Katz left the company shortly after the big executive shakeout in the Spring of 2009. He spent a few months in Hawaii recharging, and then moved his family to Silicon Valley. Since January he’s been working on a new startup, he says, and he’s teamed up with Ori Zaltzman, the former Chief Architect of Yahoo Boss. That’s enough of a team to make things really interesting. Particuarly Zaltzman’s deep infrastructure background. Information: Strata Online Conference April 2011 - O'Reilly Conferences, April 06 Why an online conference? The O'Reilly Strata Online Conference provides an ongoing forum for exploring the latest issues, without the expense or inconvenience of travel. It's our way of bringing Strata to your desktop and keeping the conversation alive throughout the year. How does it work? In an online conference, participants log on and attend sessions, enter into discussions with other participants and presenters using the live text chat, and are able to pose questions and interact with people from all over the world. It has a similar structure to a physical conference, except that you hear the speakers discuss topics and watch their slide presentations via your computer from the convenience of your office or home.

Skybox – Games, Reviews, iPhone Apps and Games – 148Apps – iPhone App and Game Reviews and News Our Review By Chris Hall on January 22nd, 2010 Rating: Share This: Much like the Japanese game show Human Tetris, Skybox pits you, a Tetris piece, against a wall with a Tetris cutout.

The convergence of Google, government and privacy Google recently added a new Privacy Tools page. If you follow tech policy in Washington, you couldn’t miss hearing about it, given that advertising for Google privacy tools was on relevant blogs, email newsletters and periodicals. And if you work, play, shop or communicate online, the issue of online privacy is more relevant to you than perhaps it ever has been before. Companies and governments are gathering unprecedented amounts of data about every click, link, and status update you make. CBS Testing Social Viewing Room: Watch Stuff With Strangers And Talk During The Show CBS Labs, which has been testing new HD streaming products, has also rolled out a labs version of a new product called Social Viewing Room. The idea is that you show up to the site, pick a show that’s on right now, and watch it with your friends or whoever is there. You can comment, LOL or take quizzes for points.