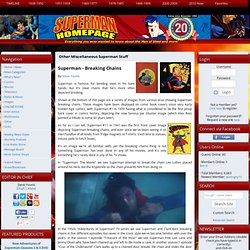 Shown at the bottom of this page are a series of images from various eras showing Superman breaking chains. These images have been displayed on comic book covers since very early Golden Age comics, with Superman #1 in 1939 having what is considered to be the first pinup back cover in comics history, depicting the now famous Joe Shuster image (which Alex Ross painted a tribute to some 60 years later). As far as I can tell, Superman #11 in 1941 was the first front cover image depicting Superman breaking chains, and ever since we've been seeing it on merchandise of all kinds, from fridge magnets to T-shirts, trash bins to statues, mouse pads to lunch boxes. It's an image we're all familiar with, yet the breaking chains thing is not something Superman has ever done in any of his movies, and it's only something he's rarely done in any of his TV shows.