Crop rotation (agriculture) Why is Crop Rotation So Important? Crop rotation is a systematic approach to deciding which crop to plant where in your vegetable garden from one year to the next. 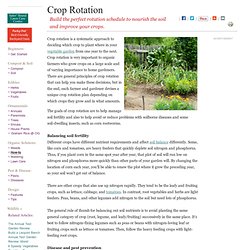 Crop rotation is very important to organic farmers who grow crops on a large scale and of varying importance to home gardeners. There are general principles of crop rotation that can help you make these decisions, but in the end, each farmer and gardener devises a unique crop rotation plan depending on which crops they grow and in what amounts. The goals of crop rotation are to help manage soil fertility and also to help avoid or reduce problems with soilborne diseases and some soil-dwelling insects, such as corn rootworms.

Balancing soil fertility Different crops have different nutrient requirements and affect soil balance differently. Some, like corn and tomatoes, are heavy feeders that quickly deplete soil nitrogen and phosphorus. There are other crops that also use up nitrogen rapidly. Moon Phases / Lunar Phases Explained. Have you ever wondered what causes the moon phases? 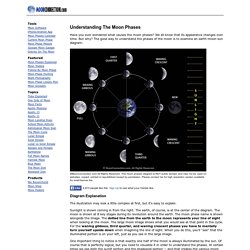 We all know that its appearance changes over time. But why? The good way to understand the phases of the moon is to examine an earth-moon-sun diagram: ©MoonConnection.com All Rights Reserved. This moon phases diagram is NOT public domain and may not be used on websites, copied, printed or republished except by permission. Diagram Explanation The illustration may look a little complex at first, but it's easy to explain.

Sunlight is shown coming in from the right. One important thing to notice is that exactly one half of the moon is always illuminated by the sun. So the basic explanation is that the lunar phases are created by changing angles (relative positions) of the earth, the moon and the sun, as the moon orbits the earth. If you'd like to examine the phases of the moon more closely, via computer software, you may be interested in this moon phases calendar software. Microbiology/ Cells. Whay makes water so important to life on earth? Wow, great question. 1. 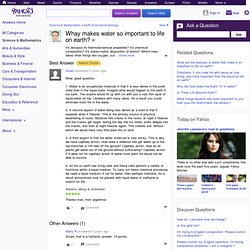 Water is an exceptional molecule in that it is less dense in the solid state than in the liquid state. Imagine what would happen to the earth if ice sank. The oceans would fill up with ice with just a very thin layer of liquid water on top. Likewise with many lakes. 2. Why is water vital to life. When astronomers search for life outside of our solar system, they look right past the gas giants like Saturn and Jupiter, past the torrid, rocky planets like Mercury and Venus, and past the dwarf planets like Pluto. 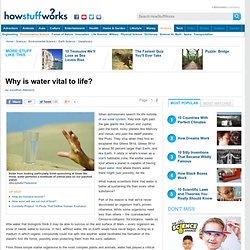 They stop when they find an exoplanet like Gliese 581d. Gliese 581d is about 50 percent larger than Earth, and like Earth, it orbits in what's known as a star's habitable zone, the stellar sweet spot where a planet is capable of having liquid water. And where there's water, there might, just possibly, be life.

What makes scientists think that water is better at sustaining life than every other substance? Part of the reason is that we've never discovered an organism that's proven otherwise. From those simple starter organisms to the most complex plants and animals, water has played a critical role in survival ever since. Besides being essential for our bodies to function, water also promotes life in numerous other ways. The Cell Cycle & Mitosis Tutorial. Www.biologymad.com/resources/AS Cells.pdf. Cell Division. Cell Division Functions in Reproduction, Growth, and Repair Cell division involves the distribution of identical genetic material, DNA, to two daughters cells. 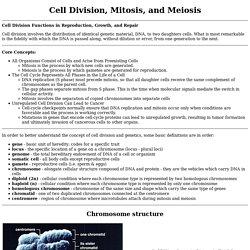 What is most remarkable is the fidelity with which the DNA is passed along, without dilution or error, from one generation to the next. Core Concepts: All Organisms Consist of Cells and Arise from Preexisting Cells Mitosis is the process by which new cells are generated. Meiosis is the process by which gametes are generated for reproduction. In order to better understand the concept of cell division and genetics, some basic definitions are in order: Chromosome structure Typical Animal Life Cycle The Cell Cycle mitosis - nuclear/chemical events resulting in two daughter nuclei which have identical genetic material to each other and to the mother cell cytokinesis - division of the cytoplasm.

Mitosis in a Nutshell The stages of the cell cycle can be broken down into six stages: Interphase, Prophase, Metaphase, Anaphase, Telophase.