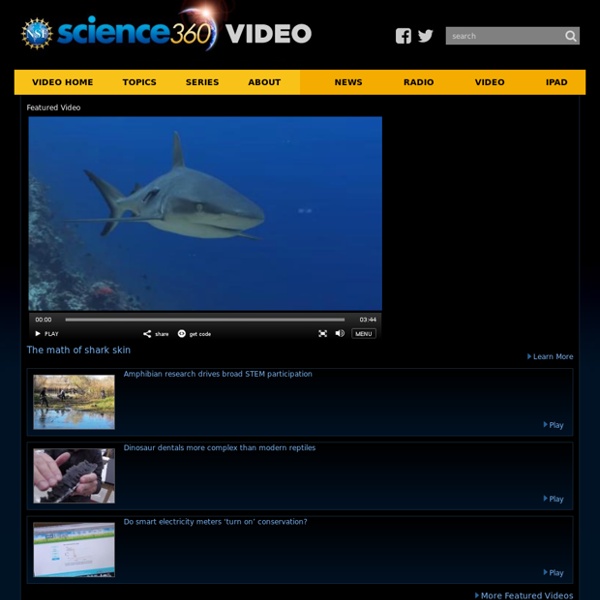 10 Important Questions To Ask Before Using iPads in Class Digital Tools Teaching Strategies Lenny Gonzales By Terry Heick Watch this bead chain loop defy gravity and bend physics Science is unendingly cool because it can consistently confound the expectations of researcher and layman alike. Case in point, what do you figure would happen if you had a bead chain coiled up in a small container, then pulled one end out? You probably didn’t guess that it would leap up and uncoil like a tiny metallic snake, but that’s what happens. This demonstration is sometimes called Newton’s Beads.

TheQuirkles Check out all these awesome Quirkles characters that are full of easy science experiments for children. Watch this introduction to The Quirkles and discover why everyone is talking about these wonderful little scientists and their cool, simple, and fun science experiments for kids! The Quirkles® are 26 imaginary scientists that help children everyday, all over the world, develop a love and appreciation for science. They are an educational based series of books that offer an easy new way to integrate literacy and fun science at school or at home for kids.

NOVA The 100-Year-Old Idea That Could Change Flight Inspired by birds, bats, and the Wright brothers, engineers are building the next breakthrough in aviation. From NOVA Next | Feb 22, 2017 A seismic shift in Ohio’s concerns over earthquakes DELAWARE, Ohio — Most people likely had never heard of the Ohio Seismic Network or the state office over it, the Ohio Geological Survey. Until New Year’s Eve, when a magnitude 4.0 quake shook Youngstown. “All of a sudden, the Geological Survey has risen from a totally obscure agency to something where people know who we are,” said Michael Hansen, state seismologist. Hansen pretty much is the seismic network. The part-time state employee keeps watch over 26 earthquake detectors with an annual budget of $20,000.

What Students Can Actually DO With An iPad Online, in workshops, and even with friends, I frequently get asked What can the iPad actually do? as a sort of challenge to the worth of the device. I would rather that they ask, What can you actually do with an iPad? So last week, in preparing for the New England Reading Association Conference and the NYSCATE Mobile Learning Summit , I decided to change my approach. Rather than structure my presentations by tool, or by app, or even by project, I organized myself around desired student outcomes – aka. what students can actually do. 18 Things Highly Creative People Do Differently This list has been expanded into the new book, “Wired to Create: Unravelling the Mysteries of the Creative Mind,” by Carolyn Gregoire and Scott Barry Kaufman. Creativity works in mysterious and often paradoxical ways. Creative thinking is a stable, defining characteristic in some personalities, but it may also change based on situation and context.

Doctor Mad Science Cool Science Experiments for Kids | Grape + Microwave = Plasma Fireworks 11,941 views 6 months ago Put a grape in the microwave and watch it become plasma fireworks. When you cut a grape ALMOST in half, and put it in the microwave, it will create plasma and make an awesome reaction. Astronomy Picture of the Day Discover the cosmos! Each day a different image or photograph of our fascinating universe is featured, along with a brief explanation written by a professional astronomer. 2016 April 15 Mercury and Crescent Moon Set Image Credit & Copyright: Miguel Claro (TWAN, Dark Sky Alqueva)

Radioactive Decay: The Source of Earth's Internal Heat The Role of Heat in Earth's Interior What spreads the sea floors and moves the continents? What melts iron in the outer core and enables the Earth's magnetic field?