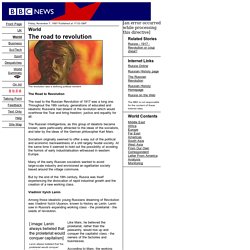 The Russian Intelligentsia, as this group of idealists became known, were particularly attracted to the ideas of the socialists, and later by the ideas of the German philosopher Karl Marx. Socialism originally seemed to offer a way out of the political and economic backwardness of a still largely feudal society. Many of the early Russian socialists wanted to avoid large-scale industry and envisioned an egalitarian society based around the village commune. But by the end of the 19th century, Russia was itself experiencing the dislocation of rapid industrial growth and the creation of a new working class. Vladimir Ilyich Lenin Among those idealistic young Russians dreaming of Revolution was Vladimir Ilyich Ulyanov, known to history as Lenin. Revolution looms. Russian Revolution. The February Revolution (known as such because of Russia’s use of the Julian calendar until February 1918) began on March 8, 1917 (or February 23 on the Julian calendar), when demonstrators clamoring for bread took to the streets in the Russian capital of Petrograd (now called St. 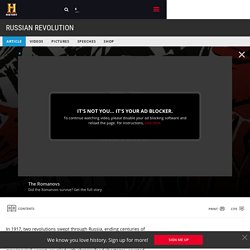 Petersburg). Supported by huge crowds of striking industrial workers, the protesters clashed with police but refused to leave the streets. On March 10, the strike spread among all of Petrograd’s workers, and irate mobs destroyed police stations. The story of the Russian revolution: from the archive, 16 March 1917. 1917: The Russian Revolution. 100 GREAT STORIES reported, investigated, written, produced, filmed, edited, photographed, anchored, and/or tweeted by columbia journalists We compiled this collection by culling the school’s archives, researching the recipients of a wide array of journalism prizes, consulting with colleagues and scouring some of the best journalism ever produced. 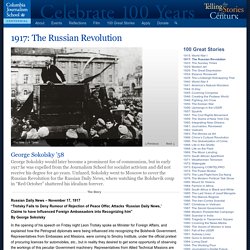 In fall 2011, we enlisted our faculty and a group of distinguished judges to vote for their favorites on the first installment of 50 Great Stories. Then, in 2012, we invited alumni to nominate and vote on the selections they thought most worthy of inclusion. The result is this compilation. These stories demonstrate the historic sweep of the work of Columbia journalists and their curiosity, courage, compassion, diversity, persistence and versatility. 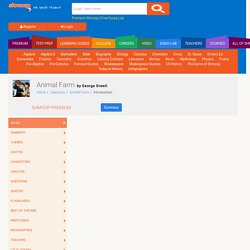 We've also got a complete Online Course about Animal Farm, with three weeks worth of readings and activities to make sure you know your stuff. Move over, Babe and Wilbur: there's a new talking pig in town. In fact, there are a lot of talking pigs. And talking horses and birds and cows, for that matter. But George Orwell's Animal Farm is no Jim Henson-inspired comedy about a pig who just wants to be a sheepdog, or bittersweet tale about interspecies love—it's a biting satire about tyrannical governments and a dark warning about the perils of Russian communism.

Today, Animal Farm is a classic. You see, Animal Farm takes a blow at the Soviet Union, especially its leader Josef Stalin—but the Soviet Union was an ally in the U.S.' But Orwell was no knee-jerk anticommunist. Since communism is an extreme form of socialism, Orwell actually fought alongside communists in the Spanish Civil War during the 1930s. 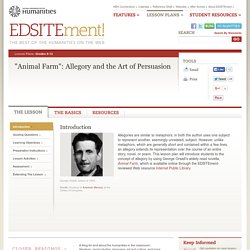 Animal Farm and Allegory George Orwell’s 1945 novella, Animal Farm, is the story of an animal revolution. The animal residents of Manor Farm, spurred on by the dream of the pig, Old Major, decide they will change their “miserable, laborious, and short” lives. They overthrow Mr.