Home Free - Angels We Have Heard On High. Manage My Loyalty Rewards. Monica Lewinsky: The price of shame. Celestia: Home. Bricklayer's Accident Report Printed In The Newsletter Of The English Equivalent Of The Workers' Compensation Board. Dear Sir, I am writing in response to your request for additional information in Block #3 of the accident reporting form. 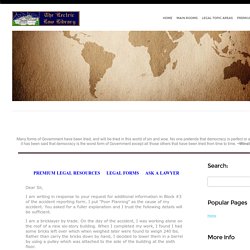 I put "Poor Planning" as the cause of my accident. You asked for a fuller explanation and I trust the following details will be sufficient. I am a bricklayer by trade. On the day of the accident, I was working alone on the roof of a new six-story building. Securing the rope at ground level, I went up to the roof, swung the barrel out and loaded the bricks into it.

In the vicinity of the third floor, I met the barrel which was now proceeding downward at an equally impressive speed. At approximately the same time, however, the barrel of bricks hit the ground and the bottom fell out of the barrel. Here my luck began to change slightly. I am sorry to report, however, as I lay there on the pile of bricks, in pain, unable to move and watching the empty barrel six stories above me, I again lost my composure and presence of mind and let go of the rope. Google+ Somebody's Getting Married - The Muppets Take Manhattan. Sting: How I started writing songs again. Pro Infirmis «Because who is perfect?» 175 Years of Photography: The Impact of Images. 175 Years of Photography: The Impact of Images. Editorials. Learnaboutbutterflies.com. Dan Barber: A foie gras parable. The Scale of the Universe 2.

If the Moon Were Only 1 Pixel - A tediously accurate map of the solar system. Mercury Venus Earth You Are Here Moon Mars Jupiter Io Europa Ganymede Callisto Saturn Titan Uranus Neptune Pluto(we still love you) That was about 10 million km (6,213,710 mi) just now. Pretty empty out here. Here comes our first planet... As it turns out, things are pretty far apart. We’ll be coming up on a new planet soon. Most of space is just space.

Halfway home. Destination: Mars! It would take about seven months to travel this distance in a spaceship. Sit back and relax. When are we gonna be there? Seriously. This is where we might at least see some asteroids to wake us up. I spy, with my little eye... something black. If you were on a road trip, driving at 75mi/hr, it would have taken you over 500 years to get here from earth. All these distances are just averages, mind you.

If you plan it right, you can actually move relatively quickly between planets. Pretty close to Jupiter now. Sorry. Lots of time to think out here... Pop the champagne! We're always trying to come up with metaphors for big numbers. Downloads.bbc.co.uk/springwatch/llotv_finalreport_20090907.pdf. Gary Greenberg: The beautiful nano details of our world. Why The Religion Of 'Positive Thinking' Needs To Be Burned At The Stake. Leigh Clark: The Degeneration of Facebook in 10 Statuses. In the olden days, Facebook was a fun place to find out what old friends were were up to. 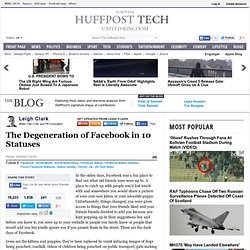 A place to catch up with people you'd lost touch with and somewhere you would share a picture of your cute new kitten or your adorable puppy. Unfortunately, things changed, you were given access to things that your friends liked and your friends friends decided to add you because you kept popping up in their suggestions box and before you knew it, you were up to your eyeballs in people you barely knew or people that would add you but totally ignore you if you passed them in the street.