BBC Learning English - Basic grammar. The Weakest Link - Doctor Who Special (2007) - Part 1. English In A Minute - Episodes. 1000 Examples of Compound Words in English - English Grammar Here. 101 French Words You Regularly Use in English. Even if you’re just starting to study French, believe it or not, you’ve already got a pretty extensive vocabulary! 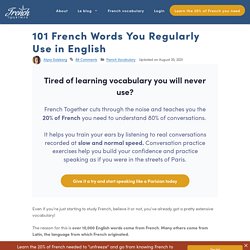 The reason for this is over 10,000 English words come from French. Many others come from Latin, the language from which French originated. This means that a significant number of English words have either exact French counterparts or very similar equivalents in French. That’s something to celebrate! But, you might be wondering, just how did all of these French words get into English? When were French words borrowed into English? In order to understand the way French influenced the English language, you have to know a little bit of history. In antiquity, Celtic languages were spoken in the British Isles. In the 5th and 6th centuries CE, Germanic tribes, including the Angles and the Saxons, invaded Britain, bringing their language with them.

All religious services and texts were in Latin. English Words Used in French: Your Complete Guide to "Anglicismes" Warning: This is not your parents’ French! 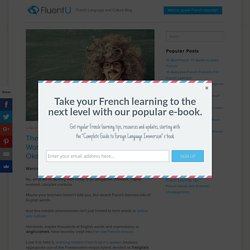 No, what we’re dealing with today is an altogether different, highly-evolved, complex creature. Maybe your teachers haven’t told you, but recent French borrows lots of English words. And this notable phenomenon isn’t just limited to tech words or online pop culture. Hundreds, maybe thousands of English words and expressions, or anglicismes, have recently crept into the vast French lexicon. Love it or hate it, learning modern French as it’s spoken involves appropriate use of the Frankenstein-esque hybrid derided as franglais. So unless you want to sound like a 19th-century professor, get comfortable and get ready to learn about the borrowed English words that power modern French speech. 99 English Words We Use In French. 50 Different Words You Can Use Instead of "Nice"

Spice up your “nice”! 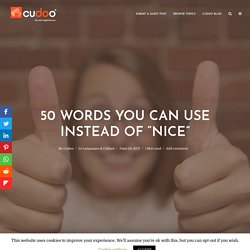 He’s nice. What a nice dress. Boring! You are now probably thinking what is another word for nice? We are here to help. YouTube. 20 Writing Mistakes Even Native Speakers Make. 16 Boring Words & What to Use Instead. 7ESL Learning English. English idioms with their meaning, for learners of English. The 50 most important English proverbs. The 50 most important English proverbs What are proverbs? 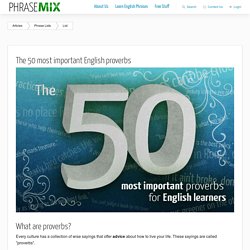 Every culture has a collection of wise sayings that offer advice about how to live your life. These sayings are called "proverbs". How can you use proverbs to learn English? It's good to know the really common English proverbs because you hear them come up in conversation all the time. You know what they say: when the going gets tough... (Read #5 below to learn the rest of this proverb and what it means.) Learning proverbs can also help you to understand the way that people in English-speaking cultures think about the world. Proverbs can also give you good example sentences which you can memorize and use as models for building your own sentences. The most important English Proverbs This is a list of some of the most important and well-known English proverbs. The meanings of some of these phrases have shifted over the years, so a proverb might have originally had a different meaning than the one I explain.

Canada’s slang borrows from dozens of languages and heritages from coast to coast. 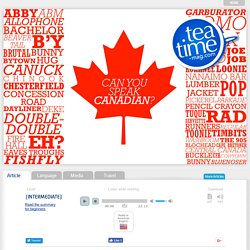 Writer Martha Nelson takes us on a linguistic tour. Text by: Martha NelsonCountry: Canada nyone who has ventured to Canada, or the Great White North, as it is affectionately known, will be familiar with a few special words and phrases unique to this part of the world. As a culturally rich and diverse country that has welcomed newcomers from all over the world, Canada boasts slang and expressions that have developed to reflect the various historical influences and combined to make up the modern language of Canada. In addition to the two official languages of French and English, Canada is home to over 65 distinct Aboriginal languages and dialects. This huge linguistic diversity has resulted in the development of mixed languages and dialects, such as Acadian French, Canadian Gaelic, Franglais, Chinook Jargon, and Basque pidgin.