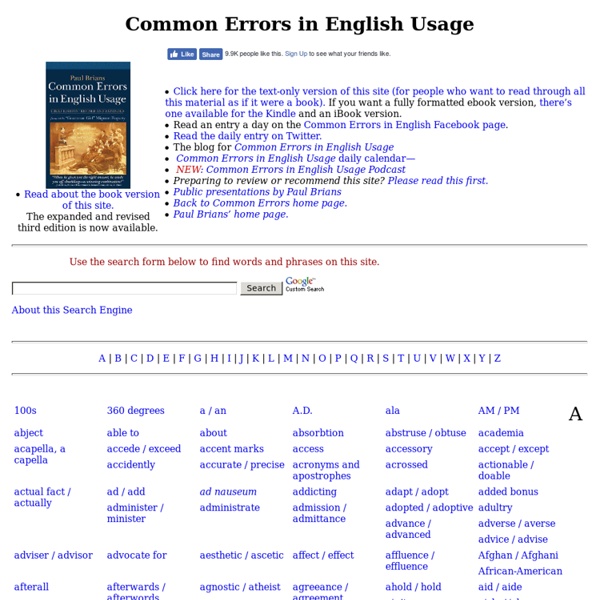 Proof Explorer - Home Page - Metamath The aleph null above is the symbol for the first infinite cardinal number, discovered by Georg Cantor in 1873 (see theorem aleph0). Metamath Proof Explorer Overview From this proposition it will follow, when arithmetical addition has been defined, that 1+1=2. —Principia Mathematica, Volume I, page 360. Paired Associates Memory Assessment - Cambridge Brain Sciences In this task you have to remember which objects are hidden in different boxes. Psychologists call the skills required for this task 'paired-associate-learning', as you are required to learn to pair two items in memory - in this case the type of object and the location of the object. When one of the paired features is revealed (in this case the object), you have to remember its associate (the location it is hidden in). This type of learning is essential in everyday life, for example when learning new words.

Lesson Plan: Gender Stereotypes! Happy women’s day! Continuing with this topic I have prepared a lesson for my intermediate course on men and women role stereotypes that I would like to share with you. I have found a good lesson plan in English-4u, a webpage where you’ll find lesson plans based on news and hit songs, to introduce the topic. The title of the lesson is “Jobs About the House” and it is a reading activity based on some statistics by the UK Office for National Statistics. After doing the activities proposed there, we can discuss whether we live in a man’s world and who is expected to do all the household chores. To finish off the lesson, we can work on an episode from friends (season 9, episode 6): “The one with the male nanny”. Ten words to cut from your writing As Mark Twain famously wrote, "I didn't have time to write a short letter, so I wrote a long one instead." His point? Strong writing is lean writing.

Verbal Working Memory Assessment - Cambridge Brain Sciences The digit span task exercises your verbal working memory. Scientists refer to working memory as the cognitive system that allows the temporary storage and manipulation of information. According to one influential cognitive theory, this system has specialised components, one of which, the 'phonological loop', underlies verbal working memory abilities (Baddeley & Hitch 1974).

ESL English Listening & Adult Literacy - News - Audiobooks - Songs - Radio Dramas The Tunnel Under The World by Frederik Pohl Guy Burckhardt wakes up screaming, but can't remember the nightmare that caused his fright. Slowly over the next couple of days he comes to realize he's been reliving the same day over and over. And things only get stranger and more frightening from there. 12 Grammar Mistakes Nearly Everyone Makes As more and more organizations join the owned media way of marketing, the grammar police seem to be in greater force. Poor Sam Fiorella. Every time he writes something, he asks three or four of us to make sure he isn’t going to be crucified by the grammar police. It’s become quite comical and we enjoy giving him a hard time about it. But he’s not alone.

Who’s afraid of math? Study finds some genetic factors A new study of math anxiety shows how some people may be at greater risk to fear math not only because of negative experiences, but also because of genetic risks related to both general anxiety and math skills. The study, which examined how fraternal and identical twins differ on measures of math anxiety, provides a revised view on why some children -- and adults -- may develop a fear of math that makes it more difficult for them to solve math problems and succeed in school. "We found that math anxiety taps into genetic predispositions in two ways: people's cognitive performance on math and their tendency toward anxiety," said Zhe Wang, lead author of the study and postdoctoral researcher in psychology at The Ohio State University. The results don't mean that math anxiety can be blamed solely or even mostly on genetic factors, the researchers emphasized.

16 Websites to Teach and Learn Vocabulary There are now several web tools that are really great in teaching vocabulary and that you can use with your students in the classroom. We have curated a list a list of some of the best web tools to teach vocabulary. Check them down below. 25 Moral Dilemmas Moral dilemmas are thought experiments which ask you to imagine a difficult situation and decide what you think the morally correct course of action would be. There are no truly ‘right’ answers to these questions, as they often ask you to compare two different moral imperatives and choose which one you feel is most important. For example, if we accept that it is morally correct to never torture a living creature, and that it is morally correct to save a human’s life if you have the ability to do so, how do you decide what to do if you can only save a human’s life by torturing someone else?