Universal Studios Florida reviews. Log In · Register Look Back at the Top Stories of the Year: Theme Park Insider: 2016 Year in Review. 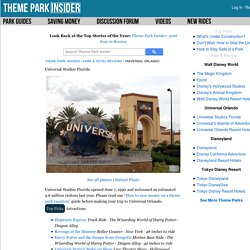 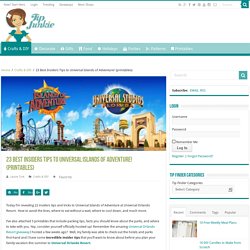 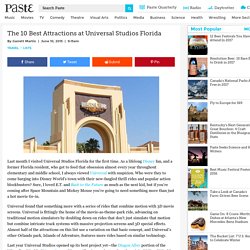 As a lifelong Disney fan, and a former Florida resident, who got to feed that obsession almost every year throughout elementary and middle school, I always viewed Universal with suspicion. Who were they to come barging into Disney World’s town with their new-fangled thrill rides and popular action blockbusters? Sure, I loved E.T. and Back to the Future as much as the next kid, but if you’re coming after Space Mountain and Mickey Mouse you’re going to need something more than just a hot movie tie-in. Universal found that something more with a series of rides that combine motion with 3D movie screens. Universal is fittingly the home of the movie-as-theme-park ride, advancing on traditional motion simulators by doubling down on rides that don’t just simulate that motion but combine intricate track systems with massive projection screens and 3D special effects. 10. 9.

Understanding Universal Studios VIP Tours and Express Passes: How Much They Cost and What they Offer @UniversalORL. On my most recent trip to Orlando I was hosted on a VIP tour of Universal Studios theme parks. 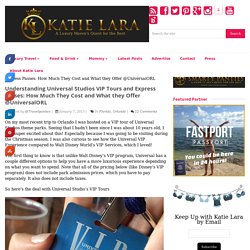 Seeing that I hadn’t been since I was about 10 years old, I was super excited about this! Especially because I was going to be visiting during the Christmas season. I was also curious to see how the Universal VIP Experience compared to Walt Disney World’s VIP Services, which I loved! The first thing to know is that unlike Walt Disney’s VIP program, Universal has a couple different options to help you have a more luxurious experience depending on what you want to spend. Note that all of the pricing below (like Disney’s VIP program) does not include park admission prices, which you have to pay separately. So here’s the deal with Universal Studio’s VIP Tours It’s worth noting first that the most basic “VIP” experience is offered to guests of Universal on-site hotels. But back to your regularly scheduled programming: VIP Tours. Every VIP Experience includes: Universal Studios Orlando Family Vacations: Top Trips for Families.

A mecca for amusement park-loving families, Orlando is one of those destinations that families return to time and time again, year after year. 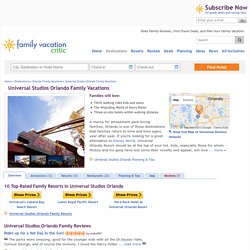 If you're looking for a great alternative to Disney World, Universal Orlando Resort should be at the top of your list. Kids, especially those for whom Mickey and his gang have lost some their novelty and appeal, will love ... more. A Killer Guide to Universal Studios Diagon Alley. After what may have been the highlight of my nerdom, I’m bringing you the Fairytale Traveler report and guide to Universal Studios Diagon Alley. 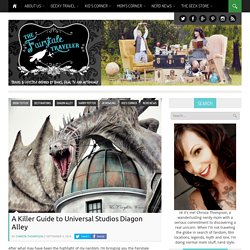 This is an easy-to-read resource of shoppes, attractions, Harry Potter spells list, tips, and the inside local scoop on the best time of year to visit and avoid the crowds. From my Butterbeered lips to your spells of magic, here’s all the wizardry that Universal Studios Orlando and the Harry Potter books have brought to life. OMG I love with a capital “L” the signage in Diagon Alley. I’m a total graphic design nut, and these just make my unicorn sparkle. 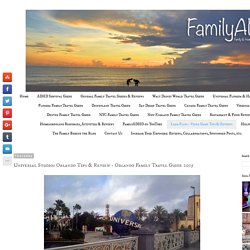 For those of you interested specifically in the Wizarding World of Harry Potter, it is actually broken up across both parks. In order to visit both parks visitors must purchase Park-to-Park Admission tickets. Universal's tickets actually increased this past spring (as did Disney's) and their prices are now comparable to Disney park tickets. We've found in the past that ticket prices tend to go up in the spring, so if you're planning a visit and you've booked your stay consider purchasing tickets then rather than waiting last-minute as we've had ticket prices go up the week before we've left, which can be a bummer!

Date Visited: March 4, 2015. A Universal Orlando primer for Disney World visitors. (Article last updated: October 6, 2015) Universal is a park I like to occasionally tack on to our Disney World trips, if only to see the new Harry Potter stuff which is worth a visit for anybody. 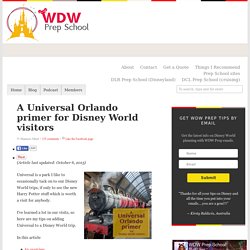 I've learned a lot in our visits, so here are my tips on adding Universal to a Disney World trip. An overview Universal Orlando is similar in size and composition to Disneyland in California. There are 2 theme parks (like Disneyland, one of the parks is confusingly named the same as the overall resort), 4 hotels and an outdoor shopping area. Both theme parks (Universal Studios and Islands of Adventure) and the shopping area (CityWalk) are located within walking distance to each other. 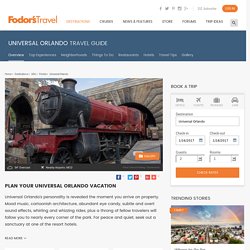 Mood music, cartoonish architecture, abundant eye candy, subtle and overt sound effects, whirling and whizzing rides, plus a throng of fellow travelers will follow you to nearly every corner of the park. For peace and quiet, seek out a sanctuary at one of the resort hotels. At a breathless pace, there’s a chance you could visit both Universal parks in a single day, but to do that you’ll have to invest in a UNIVERSAL EXPRESS PASS.

Without it, you’ll spend a good portion of that day waiting in line at the premium attractions. So allow two days, perhaps three; a day for each park and a "pick-up" day to return to your favorites at a leisurely pace. Universal Studios appeals primarily to those who like loud, fast, high-energy attractions—generally teens and adults. When Islands of Adventure (IOA) first opened in 1999, it took attractions to a new level. Universal Studios Florida®: Orlando Attractions Review. Best Theme Parks: With its Springfield USA addition luring Simpson fans worldwide and the Despicable Me Minion Mayhem ride still high on visitors' lists, Universal Studios Florida will soon be nipping at its sister... 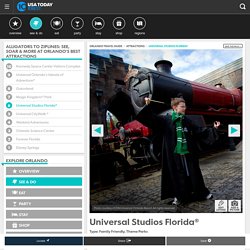 Read More Best Theme Parks: With its Springfield USA addition luring Simpson fans worldwide and the Despicable Me Minion Mayhem ride still high on visitors' lists, Universal Studios Florida will soon be nipping at its sister park's heels as Diagon Alley – the newest phase of the Wizarding World of Harry Potter – is set to open later in 2014. Additionally, coaster aficionados will rejoice in both the Hollywood Rip Ride Rockit, Orlando's tallest, and the indoor marvel of Revenge of the Mummy, which plunges riders into darkness as they race through dazzling, special effects-driven perils from the film that inspired it: scurrying carnivorous scarabs, an army of warrior mummies and an almost too real fireball.

The app lets you zoom in and out on the park layout, seeing restaurants, attractions and even bathrooms as you close in. You'll also get to search for a restaurant or attraction by name, check their menus out, organize and reserve for dining right from within the app, view recent wait times for rides and more. This app will also give out park operating hours, help you find restrooms, submit ride wait times if you're present at the park, and get access to this information offline except for wait hours. Head on over to Tom's Guide for more iPhone news and our recommendations for iPhone games. The Lazy Mom’s Guide To Dominating Universal Studios Orlando. It’s too hard! That’s what your lazy brain tells you when the idea of a family vacation to Universal Studios Orlando comes up. You have to organise flights, transport, a hotel, theme park tickets, research restaurants, plus other activities in the area.

Around every corner awaits another once-in-a-lifetime thrill. Take an unforgettable journey through the uniquely themed islands of Universal’s Islands of Adventure®, where the world's most cutting edge rides, shows and interactive attractions bring your favorite stories, myths, cartoons, comic book heroes and children's tales to life. Join the battle of good versus evil above the streets of Marvel Super Hero Island®. Get splash happy with your favorite cartoon characters in the water rides of Toon Lagoon®. Come face to face with the dinosaurs of Jurassic Park®.