10 TED Talks That Will Change the Way You Communicate 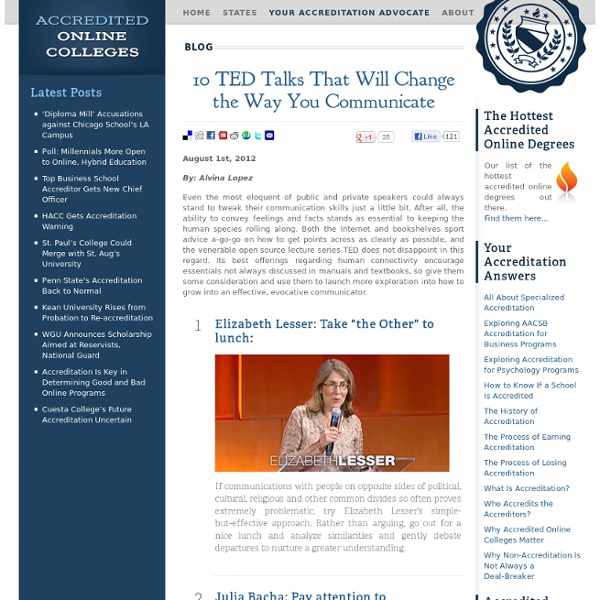 August 1st, 2012 By: Alvina Lopez Even the most eloquent of public and private speakers could always stand to tweak their communication skills just a little bit. After all, the ability to convey feelings and facts stands as essential to keeping the human species rolling along. Both the Internet and bookshelves sport advice a-go-go on how to get points across as clearly as possible, and the venerable open source lecture series TED does not disappoint in this regard. Its best offerings regarding human connectivity encourage essentials not always discussed in manuals and textbooks, so give them some consideration and use them to launch more exploration into how to grow into an effective, evocative communicator. Elizabeth Lesser: Take "the Other" to lunch: If communications with people on opposite sides of political, cultural, religious and other common divides so often proves extremely problematic, try Elizabeth Lesser’s simple-but-effective approach.

Superhero Bias Followup to: The Halo Effect Suppose there's a heavily armed sociopath, a kidnapper with hostages, who has just rejected all requests for negotiation and announced his intent to start killing. In real life, the good guys don't usually kick down the door when the bad guy has hostages. But sometimes—very rarely, but sometimes—life imitates Hollywood to the extent of genuine good guys needing to smash through a door. Imagine, in two widely separated realities, two heroes who charge into the room, first to confront the villain. In one reality, the hero is strong enough to throw cars, can fire power blasts out of his nostrils, has X-ray hearing, and his skin doesn't just deflect bullets but annihilates them on contact.

Use a Journal For Self-Discovery and Self-Expression By Garrett Coan – As a therapist, I often suggest to clients that they explore their feelings and thoughts by keeping a journal. Sometimes clients ask for a bit of direction with this process. Here are some journaling ideas if you’re not sure where to start: The best spiritual books of all time The best spiritual books of all time Gathering all my spiritual book reviews together. Religion and spirituality fascinates me no end. I also love to read books - this lens combines both fascinations.... Best most popular Buddhism Books These books explain Buddhism for a modern Western audience. How to Address Problems in the Workplace Wednesday, January 11, 2012 Views: 21441 Jason Nazar is CEO & Co-founder of Docstoc (docstoc.com). In this video he discusses how to address problems in the workplace. Determine if problem is a priority & accept it may not be Address the issue & hold someone accountable for solution Take charge if you are able to resolve the problem Transcription

Best Inventions of the Year 2012 Marcin Jakubowski built a tractor in six days. Then he told the world how to do it: he made the designs, the budget and an instructional video available free online. A farmer and technologist and the founder of Open Source Ecology, Jakubowski has identified the 50 most important machines required for modern life—from the soil pulverizer to the oven—and is working to make a prototype of a low-cost DIY version of each so that anyone anywhere can build them. “If we can lower the barriers to farming, building and manufacturing,” he says, “then we can unleash massive amounts of human potential.” Next The Motion-Activated Screwdriver

Top 40 Useful Sites To Learn New Skills The web is a powerful resource that can easily help you learn new skills. You just have to know where to look. Sure, you can use Google, Yahoo, or Bing to search for sites where you can learn new skills , but I figured I’d save you some time. Glazed, Distressed Paintings (A Tutorial I was so excited when Kirstin and Jordan of Kojo Designs asked me to be a part of their “the sincerest form of flattery” series! I love a good challenge so I’ve been keeping my eye out for something on my “wish list” that would be fun to do! I love these prints of glazed paintings from Ballard Designs and decided to make a miniature version of the beach themed one: With a few simple steps (and an eager toddler), I was able to mimic a similar glazed effect to create my own beach painting!

The most popular 20 TED Talks, as of now UPDATED: To see all these talks at one click, check out our updated Playlist: The 20 Most Popular Talks of All Time. As 2013 draws to a close, TED is deeply humbled to have posted 1600+ talks, each representing an idea worth spreading. So which ideas have had the most widespread impact? Below, a look at the 20 most-watched talks as of December 2013. These viewership numbers include all the platforms we track: TED.com, YouTube, iTunes, embed and download, Hulu and more. Some fascinating things to notice on this list, if you’d like to compare and contrast it to the most popular talks in 2012, and to the list we shared back in 2011: Amy Cuddy, Susan Cain, David Blaine and Pamela Meyer are all newcomers to the list, with Cuddy’s talk storming to spot #5 thanks to you sharing it.

WHAT COLOR IS YOUR JESUS? I recently listened to an interview with Bruce Sanguin and Rev. Kelly Isola in which Sanguin talked about how he’s applying the Spiral Dynamics model of human development to explain why Jesus means so many different things to so many different people. I have been a fan of Spiral Dynamics for quite some time. Spiral Dynamics is a theory of human development introduced in the 1996 book by Don Beck and Chris Cowan which was based on the work of professor Clare W. Graves. This theory explores the process of human emergence and how living systems evolve, grow and change.

Personal Development Blog by Yee Shun-Jian Welcome to RichGrad.com - THE award-winning Personal Development Blog that has touched more than a million lives since July 2007 Sign up for my Free Personal Development Newsletter to receive tips on overcoming your fears, building your confidence & leading a richer life! Photo by Jeff Meyer Just how valuable is time management in our lives? A study from a reputable university in UK compared people who follow a stable schedule to those who didn’t. Illustrations Of Unusual And Rarely Spoken Words Recumbentibus—A knockout punch, either verbal or physical. The Irish illustration duo of James and Michael Fizgarald, or also known as The Project Twins, have come up with a series of illustrations that visually represent rarely spoken and heard of words. In their series called ‘A-Z of Unusual Words’, the meaning of the words have been visually defined in the form of a whimsical poster—which can be purchased on their website. Here are some of their ‘informative’ posters:

A War On Consciousness – Graham Hancock Banned TED Talk In January of 2013, British author and researcher Graham Hancock presented to a TEDx audience a summary (titled “The War on Consciousness”) of his various investigative work into the historical origins of human consciousness, with key insights addressed along with his own personal experiences. Hancock makes a contrast between the traditional cultural values and practices centered around visionary states of consciousness with the values and practices of the modern industrial world. The TEDx event was titled “Visions for Transition: Challenging existing paradigms and redefining values (for a more beautiful world)”. The event was intended to be paradigm-busting, but apparently Hancock wasn’t conservative enough in his message, because his TED talk got banned and removed from their website and their Youtube channel.