Leadership Styles: Most Common Styles. How do various leadership styles perform? How does somebody develop a style of leadership? There are a number of leadership types that have been observed and studied, as you certainly know. Authorities and experts have several common systems for classifying these different styles. All the classification systems of leadership below are valid and offer some guidance from which a leader can learn. Look at the several classification systems below, and consider which one best suits your needs and your situation. “Most of the work that is accomplished is not yours, it’s the work of others. Some authorities say leadership consists of three styles: • Authoritarian or autocratic – this is the commanding style—“Do as I say, because I am the boss. . ” • Democratic or participative (sometimes called authoritative) – this is the style that includes participation and greater equality between leader and followers. Some authorities say leadership can be categorized into two styles: 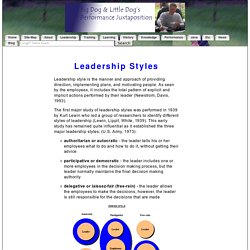 As seen by the employees, it includes the total pattern of explicit and implicit actions performed by their leader (Newstrom, Davis, 1993). The first major study of leadership styles was performed in 1939 by Kurt Lewin who led a group of researchers to identify different styles of leadership (Lewin, Lippit, White, 1939). This early study has remained quite influential as it established the three major leadership styles: (U.S. Army, 1973): Although good leaders use all three styles, with one of them normally dominant, bad leaders tend to stick with one style, normally autocratic. Authoritarian or Autocratic Leadership I want both of you to. . . This style is used when leaders tell their employees what they want done and how they want it accomplished, without getting the advice of their followers.

The authoritarian style should normally only be used on rare occasions. Forces. Leadership Styles - Leadership Training from MindTools. Choosing the Right Approach for the Situation Find out what makes a great leader, with James Manktelow & Amy Carlson. 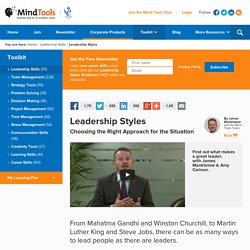 From Mahatma Gandhi and Winston Churchill, to Martin Luther King and Steve Jobs, there can be as many ways to lead people as there are leaders. Fortunately, businesspeople and psychologists have developed useful frameworks that describe the main ways that people lead. When you understand these frameworks, you can develop your own approach to leadership, and become a more effective leader as a result. In this article, we'll highlight some of the common approaches to leadership that you can use. Note: These frameworks and styles of leadership are based on several different approaches to leadership. Useful Leadership Style Frameworks So, let's look at some useful approaches – shown mainly in the order they appeared – that you can use to become a more effective leader. Lewin's Leadership Styles The Blake-Mouton Managerial Grid The Blake-Mouton Managerial Grid Path-Goal Theory . 028935ar.pdf (application/pdf Object) 6_257-275.pdf (application/pdf Object)