12 Things You Should Never Take For Granted After Working For an Amazing Boss. How To Be Your Own Leadership Development Coach. Today’s organizations have a leadership gap. 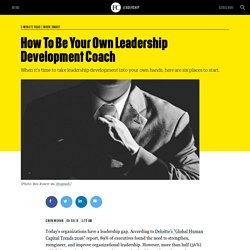 According to Deloitte’s "Global Human Capital Trends 2016" report, 89% of executives found the need to strengthen, reengineer, and improve organizational leadership. However, more than half (56%) said their organizations are not ready to meet leadership needs, and more than one in five companies (21%) have no leadership programs at all. Conflict Resolution Steps for Leaders. The Hidden Curriculum of Work. What do you do for work? 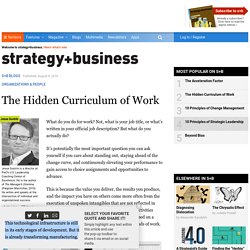 Not, what is your job title, or what’s written in your official job description? But what do you actually do? It’s potentially the most important question you can ask yourself if you care about standing out, staying ahead of the change curve, and continuously elevating your performance to gain access to choice assignments and opportunities to advance.

Leading without Formal Authority. Leadership Character. Recognition. Simon Sinek: How great leaders inspire action. 10 Habits of Well-Liked Bosses. Walt Bettinger of Charles Schwab: You’ve Got to Open Up to Move Up. The Top Complaints from Employees About Their Leaders. If you’re the kind of boss who fails to make genuine connections with your direct reports, take heed: 91% of employees say communication issues can drag executives down, according to results from our new Interact/Harris Poll, which was conducted online with roughly 1,000 U.S. workers. 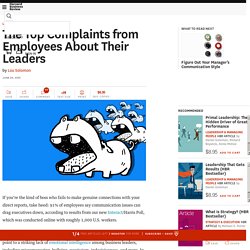 In the survey, employees called out the kind of management offenses that point to a striking lack of emotional intelligence among business leaders, including micromanaging, bullying, narcissism, indecisiveness, and more. In rank order, the following were the top communication issues people said were preventing business leaders from being effective: The data shows that the vast majority of leaders are not engaging in crucial moments that could help employees see them as trustworthy. This is startling, considering how much money organizations spend conducting employee surveys and reorganizations, engaging consultants and implementing change initiatives. They know productivity is tied to communication. 5 Ways Leaders Think Differently Than The Rest Of Us. While there are no definitive brain scans that show differences in the way leaders’ grey matter works, there is some consensus that leaders have some commonalities in how they think about the world. 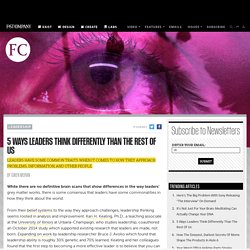 From their belief systems to the way they approach challenges, leadership thinking seems rooted in analysis and improvement. Kari H. Keating, Ph.D., a teaching associate at the University of Illinois at Urbana-Champaign, who studies leadership, coauthored an October 2014 study which supported existing research that leaders are made, not born. Expanding on work by leadership researcher Bruce J. Spire's Peter Platzer: the boss who never fires anyone. If you’ve been hired by the nanosatellite and data startup Spire, chances are you will never be fired. 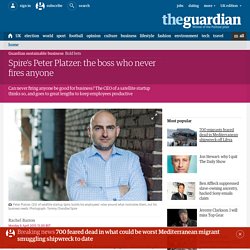 “It’s kind of like US Army rules: no man left behind,” said Peter Platzer, CEO of the San Francisco-based company, about joining the ranks of Spire’s 45 employees. Employee Engagement Ideas. How to Deliver a Motivational Pep Talk to Your Team. The band had traveled 13 hours on 14 buses for this once-in-a-lifetime experience. 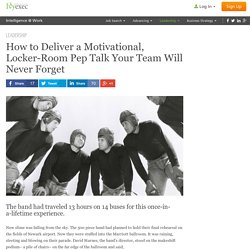 Now slime was falling from the sky. The 500 piece band had planned to hold their final rehearsal on the fields of Newark airport. 5 Elements of Positive Leadership. Many entrepreneurs forget that their success is more about helping other people than about personally becoming famous, or overcoming the odds and getting rich. 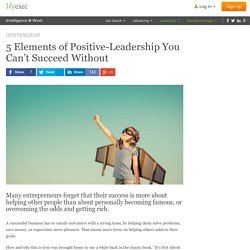 A successful business has to satisfy customers with a strong team, by helping them solve problems, save money, or experience more pleasure. That means more focus on helping others achieve their goals. How to Be a Better Leader: 1 Easy Thing. Transactional Leadership Vs. Transformational Leadership. Number of Leadership theories evolved on the basis of Trait, Behavioral, Transformational, Situational, Charisma. 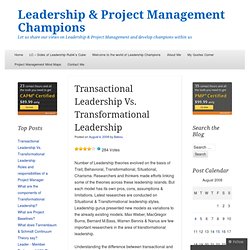 Researchers and thinkers made efforts linking some of the theories across these leadership islands. But each model has its own pros, cons, assumptions & limitations. Latest researches are conducted on Situational & Transformational leadership styles. Leadership gurus presented new models as variations to the already existing models. What did Sundar Pichai do, that his peers didn't do, that got him promoted up to the highest ranks at Google?

Leadership Secrets from Successful CEOs. There's no one right way to be a good leader. 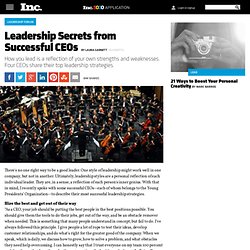 One style of leadership might work well in one company, but not in another. Ultimately, leadership styles are a personal reflection of each individual leader. 42 Rules to Lead by from the Man Who Defined Google’s Product Strategy. Seven Ways To Inspire Employees To Love Their Jobs. "Are You Mad at Me?" Fun Practical Leadership Video (Quick Animated Story) Skills of a Leader. Skills of a Leader – Always The Leader – Powerful Leadership Video My passion is developing the skills of a leader (both the actual process of developing leaders I have manged and those leaders I have trained and worked with as a consultant). 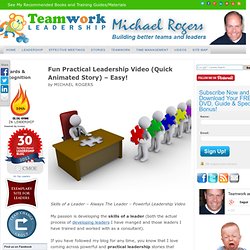 If you have followed my blog for any time, you know that I love coming across powerful and practical leadership stories that demonstrate how easy it can be to make a big difference as a leader. Here is one such story. The DMV is the perfect example, the poster child, for poor customer service. In this video developing leaders will learn how making a few tweaks can make a big impact on an organization. What Sets Effective Mid Managers Apart.

By Behnam Tabrizi | 11:00 AM May 8, 2013 Over the past 20 years, no group has endured greater pain and humiliation within organizations than mid-level managers (MLMs — managers from two levels below the CEO down to the line managers). Leadership Pipeline BBS. Drotter_synopsis. Maybe a Management Job Isn’t Your Style. You can point to any number of reasons for this situation: insufficient training, poor communication, etc. But I say a bad boss is born each time someone goes into management without knowing whether he or she is truly suited to the role. When people are offered a managerial job, they may become intoxicated by the idea of more power and a bigger salary. Refusing such an offer can seem out of the question. Washington Post. The problem in the eyes of many federal managers and supervisors is that it’s simply too hard to remove a poorly performing employee and not worth the effort.

That’s the conventional wisdom. Yet while it may not be easy, it isn’t impossible. How to Give Effective Feedback, Both Positive and Negative. Gary Hamel’s pyramid of human capabilities. April 8, 2010 (Click to enlarge) This is a transcript from Gary Hamel video on management innovation. The author of Future of Management presents his Maslow pyramid describing the hierarchy of human capabilities within a work environment. 7 Ways New Managers Can Shine. Leadership. Leadership. LEADERSHIP. 7 Traits of Extraordinary Bosses. Role of the Line Manager. The line manager is involved in human resources management quite often. Work-From-Home Policies That Work.