Building a psychologically safe workplace: Amy Edmondson at TEDxHGSE. The Easiest Way to Sabotage Your Success. Robu_s / Dollarphotoclub Before you read this or any other article on leadership or coaching success, go for a walk. 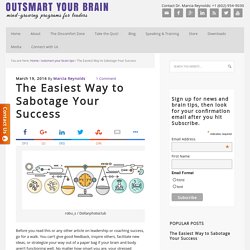 You can’t give good feedback, inspire others, facilitate new ideas, or strategize your way out of a paper bag if your brain and body aren’t functioning well. No matter how smart you are, your stressed biology will sabotage your success as a performer and a leader. I recently had a company hire me to increase the emotional intelligence of their leaders because the employees were stressed, making mistakes, losing business, and arguing more than helping each other.

It was hard for me to make appointments with the leaders because they were so busy. What the leaders didn’t understand is that the ability to act with emotional intelligence is impaired by sleep deprivation, poor nutrition, noise pollution, excessive conflict, money problems and a shortage of friends. Working harder can hurt your success Then there are the contagious effects of stress. Why CEOs Don't Want Executive Coaching  A recent study by the Stanford Business School found that nearly two-thirds of CEOs don't receive executive coaching or leadership development. 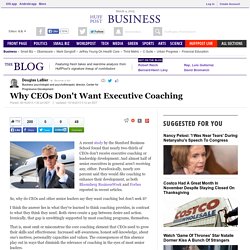 And almost half of senior executives in general aren't receiving any, either. Paradoxically, nearly 100 percent said they would like coaching to enhance their development, as both Bloomberg BusinessWeek and Forbes reported in recent articles. So, why do CEOs and other senior leaders say they want coaching but don't seek it? I think the answer lies in what they've learned to think coaching provides, in contrast to what they think they need.

8 TED talks every entrepreneur should watch. We know you don’t have a lot of time – and there are a whopping 1,600 TED talks to watch – so here's our bumper crop of the best ones for an instant shot of inspiration. 1. 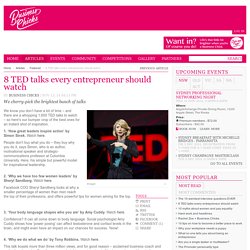 ‘How great leaders inspire action’ by Simon Sinek. Watch here. People don't buy what you do – they buy why you do it, says Simon, who is an author, motivational speaker and strategic-communications professor at Columbia University. Here, his simple but powerful model for inspirational leadership. 2. Facebook COO Sheryl Sandberg looks at why a smaller percentage of women than men reach the top of their professions, and offers powerful tips for women aiming for the top. The Art of Disappointing Others - Ten Directions. Most people won’t recommend disappointing the people you report to as a strategy for furthering your career. 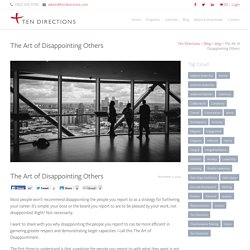 It’s simple: your boss or the board you report to are to be pleased by your work, not disappointed. Coming to apithology ... and the generative unfolding of The Holos Group — Dr. Richard Harmer. I was on a late night flight form Sydney to Melbourne in October, 2012. 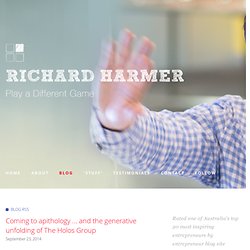 The Three Qualities of People I Most Enjoy Working With. The Language of Leadership: 5 Actions To Transform Performance. Transform or die!: Herman Toch at TEDxBrainport 2013. Women's Leadership Can Transform the Way We Do Business in a Climate-Constrained World  As a global community, we find ourselves at a critical juncture. 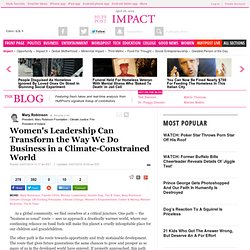 One path -- the "business as usual" route -- sees us approach a drastically warmer world, where our continuing reliance on fossil fuels will make this planet a cruelly inhospitable place for our children and grandchildren. The other path is the route towards opportunity and truly sustainable development. The route that gives future generations the same chances to grow and prosper as so many of us in the developed world have enjoyed. If properly approached, this path should address the core inequalities that have plagued our world to date. But traveling this path requires a transformation in leadership as we move to a new greener, low carbon development model. The transformative leadership necessary for a fair and climate-just future for all requires bold and brave steps by heads of state and government around the world. On Being an Authentic Leader. By Grant WattiePresident, N2growth Australia Wolfgang Beltracchi is the most successful art forger in history. 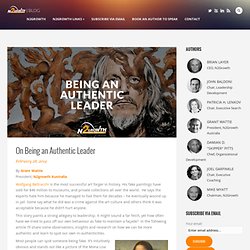 His fake paintings have sold for $46 million to museums, and private collections all over the world. SEVEN IDEAS FOR MASTERING THE ART OF FACILITATIOn Amanda Fleming Presenter at Large Auckland New Zealand. The ‘old’ days of leadership being about domination and control are in twilight. 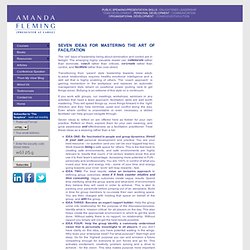 The emerging highly valuable leader can collaborate rather than dominate, coach rather than criticise, co-create rather than control, and facilitate rather than over-direct. Transitioning from ‘parent’ style leadership towards more adult-to-adult relationships requires healthy emotional intelligence and a skill set that is highly enabling of others. How to present december 2013 edition by Michelle Bowden. Leadership Is About Emotion. Another Way to Lean In. How and Why to Be a Leader (Not a Wannabe) - Umair Haque. We need a new generation of leaders. 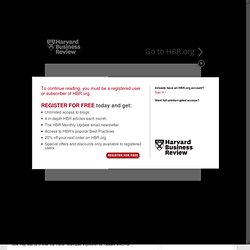 And we need it now. We’re in the midst of a Great Dereliction — a historic failure of leadership, precisely when we need it most. Hence it’s difficult, looking around, to even remember what leadership is. We’re surrounded by people who are expert at winning — elections, deals, titles, bonuses, bailouts, profit. How and Why to Be a Leader (Not a Wannabe) - Umair Haque.

The heart of leadership

Related:  How to Be an Emotionally & Socially Intelligent Leader   -  Trauma Healing   -  Education   -  Enterprise