19 Annoying Habits You Must Break To Be a Better Leader - Lolly Daskal. If you don’t break your annoying habits you will never become the leader you want to be. 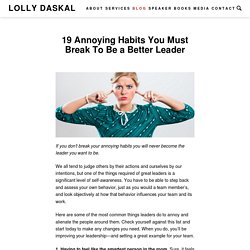 We all tend to judge others by their actions and ourselves by our intentions, but one of the things required of great leaders is a significant level of self-awareness. You have to be able to step back and assess your own behavior, just as you would a team member’s, and look objectively at how that behavior influences your team and its work. Here are some of the most common things leaders do to annoy and alienate the people around them.

Check yourself against this list and start today to make any changes you need. When you do, you’ll be improving your leadership—and setting a great example for your team. 1. 11 Surefire Ways To Instantly Connect With Anyone. Shutterstock Too many people succumb to the mistaken belief that the ability to connect with others is a natural, unteachable trait that belongs to only a lucky few. 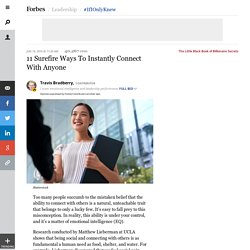 It’s easy to fall prey to this misconception. In reality, this ability is under your control, and it’s a matter of emotional intelligence (EQ). Research conducted by Matthew Lieberman at UCLA shows that being social and connecting with others is as fundamental a human need as food, shelter, and water. For example, Lieberman discovered that we feel social pain, such as the loss of a relationship, in the same part of the brain that we feel physical pain.

The primary function of this brain area is to alert us to threats to our survival. “The most basic of all human needs is the need to understand and be understood.” MRIs of the brain show that social thinking and analytical thinking involve entirely different neural networks and that they operate something like a seesaw. Just Watch These 10 TED Talks. Inc.com. Improve Your Management with Effective Leadership Strategies. I have a guest post today on my favorite topic, Leadership. Thanks Jessica for sending this one to me and for your patience in getting it posted. Please add your feedback and comments once you’ve read this. The manager has been a fixture of the workplace since the Industrial Revolution and the resultant factory- and goods-based economy; it was in that context that the primary role of management—distribution of labor, enforcement of deadlines, and insurance of set production outputs—developed.

The economy and the workplace have changed dramatically since, but the concept of management has changed little. Leadership, on the other hand, isn’t traceable to any particular economy or sociopolitical environment, and its principles remain as relevant today as they were 1,000 years ago. 1- Lead By Example Model your expectations of employee conduct and output at all times. Also, keep in mind that you are one of your company’s influential representatives. 2- Admit Your Mistakes 5- Innovate.

27 Ways to Be a Better Boss. Credit: ChameleonsEye/Shutterstock Some people may be born leaders, but being the boss isn't always easy. 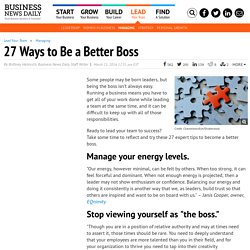 Running a business means you have to get all of your work done while leading a team at the same time, and it can be difficult to keep up with all of those responsibilities. Ready to lead your team to success? Take some time to reflect and try these 27 expert tips to become a better boss. "Our energy, however minimal, can be felt by others. "Though you are in a position of relative authority and may at times need to assert it, those times should be rare. "We all spend a lot of our time in meetings, and meetings get a bad rap, mostly because they aren't run effectively, start late and drag on past the ending time. "One of the best questions a boss could ask is, 'What do you need from me? "A great boss hires the right people for the team. "There are two main reasons for arriving early at work, aside from the fact that it will make you a more productive person.

"Listen and observe more. 3 Things Every Great Leader Gets Wrong. Every great leader possesses a degree of what Walter Isaacson (in his biography of Steve Jobs) describes as "an ability to distort reality. 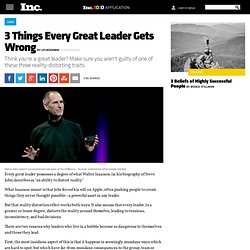 " What Isaacson meant is that Jobs forced his will on Apple, often pushing people to create things they never thought possible--a powerful asset in any leader. But that reality distortion effect works both ways. It also means that every leader, to a greater or lesser degree, distorts the reality around themselves, leading to tensions, inconsistency, and bad decisions. There are two reasons why leaders who live in a bubble become so dangerous to themselves and those they lead. First, the most insidious aspect of this is that it happens in seemingly mundane ways which are hard to spot, but which have far-from mundane consequences to the group, team or organization. Second, the bubble effect is directly proportional to the ability of the leader. 1. 2. 3.