Leadership Development Archives - Chief Learning Officer - CLO Media. 7 Reasons Why Emotional Intelligence Is One Of The Fastest-Growing Job. As a lifelong musician, at first I felt slighted by Microsoft's newfound emphasis on creativity. The upcoming Surface Studio desktop is a clear nod to visual artists, with a massive touch screen for sketching, painting, and graphic design, while the knoblike Surface Dial peripheral seems perfect for tool selection in Photoshop. Both devices will be buttressed by the Windows 10 Creators Update, which includes new programs for 3D modeling and drawing. Those announcements seemed to leave musicians out of the picture, so I asked makers of music software and digital audio devices whether Microsoft had been neglecting them. How to Make a Big Decision.

The upshot is clear: If you find yourself mapping a “whether or not” question, looking at a simple fork in the road, you’re almost always better off turning it into a “which one” question that gives you more available paths. 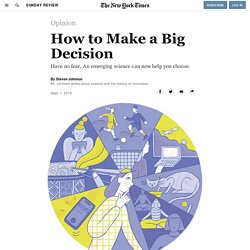 What’s the best way to expand your pool of options? Researchers suggest that if possible, you diversify the group of people who are helping make the decision. Home. The Hidden Advantages of Quiet Bosses.

The 7 Habits: Be Proactive, Not Reactive. If Your Employees Aren't Learning, You're Not Leading. Creativity Is The New Black. The Most Important Leadership Quality for CEOs? Creativity. For CEOs, creativity is now the most important leadership quality for success in business, outweighing even integrity and global thinking, according to a new study by IBM. 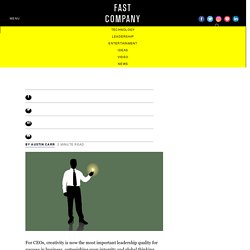 The study is the largest known sample of one-on-one CEO interviews, with over 1,500 corporate heads and public sector leaders across 60 nations. Are You a Change Leader? Change leaders are a unique breed. 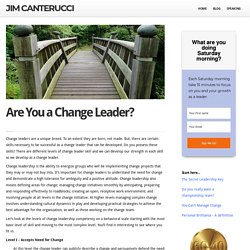 To an extent they are born, not made. But, there are certain skills necessary to be successful as a change leader that can be developed. Do you possess these skills? There are different levels of change leader skill and we can develop our strength in each skill as we develop as a change leader. 4 must-have skills for leaders to manage change. The Power of Collective Ambition. The Power of Collective Ambition. What Is A Changemaker? A remarkable thing happened last week at the Democratic National Convention in Philadelphia: Bill Clinton chose to encapsulate Hillary’s public service career with one description: “She is the best darn changemaker I have ever known.” 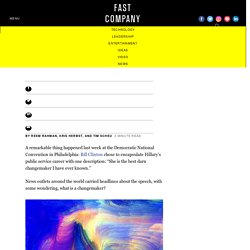 Bored with small talk? Here's how to start a meaningful conversation. Ditching the small talk in favor of more thoughtful, emotionally charged conversation could not only spark more meaningful relationships and make you more memorable—but also advance your career, Sue Shellenbarger writes for the Wall Street Journal. 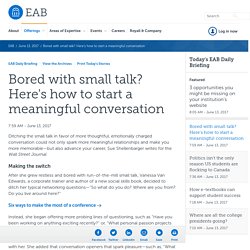 The Real Leadership Lessons of Steve Jobs. His saga is the entrepreneurial creation myth writ large: Steve Jobs cofounded Apple in his parents’ garage in 1976, was ousted in 1985, returned to rescue it from near bankruptcy in 1997, and by the time he died, in October 2011, had built it into the world’s most valuable company. 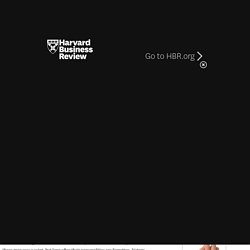 Along the way he helped to transform seven industries: personal computing, animated movies, music, phones, tablet computing, retail stores, and digital publishing. He thus belongs in the pantheon of America’s great innovators, along with Thomas Edison, Henry Ford, and Walt Disney. None of these men was a saint, but long after their personalities are forgotten, history will remember how they applied imagination to technology and business. “The people who are crazy enough to think they can change the world are the ones who do.” —Apple’s “Think Different” commercial, 1997 In the months since my biography of Jobs came out, countless commentators have tried to draw management lessons from it.

Focus. The Best Leadership Advice You'll Get From a Steve Jobs Movie. There’s a great scene in the 2015 movie Steve Jobs where Steve Wozniak, played by Seth Rogen, tells Steve Jobs, played by Michael Fassbender, all the things he doesn’t do. 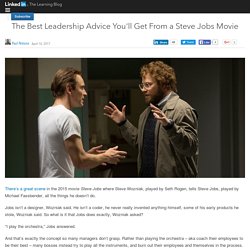 Jobs isn’t a designer, Wozniak said. Why Theo Epstein and the Chicago Cubs Are Fortune’s MVPs This Year. In the fall of 2016, as partisan distrust and division reached abysmal depths, fascination with the Chicago Cubs became that all-too-rare phenomenon that united America. 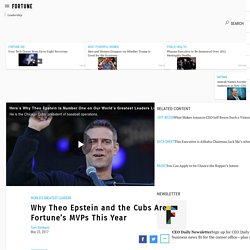 As the Cubs fought to end a 108-year championship drought, television ratings for the World Series soared by almost 50%. Even casual fans who didn’t know a bunt from a beanball stayed up late to watch the excruciating extra-inning Game Seven that turned baseball’s most famous lovable losers into winners at last. In his book The Cubs Way, Sports Illustrated senior baseball writer Tom Verducci details the five-year rebuilding plan that led to the team’s victory.

The Cubs owe their success to a concatenation of different leadership styles, from the affable patience of owner Tom Ricketts to the innovative eccentricity of manager Joe Maddon. Related. The 6 Stages Every Organization Goes Through as it Matures. Part of being a strategic learning and development team is having a plan for not just today’s business needs, but also of the needs of the business moving forward. 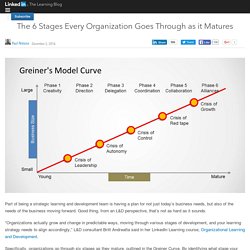 Good thing, from an L&D perspective, that’s not as hard as it sounds. An economist's workforce predictions for 2017. Want to know the workplace trends you should expect in the coming year? 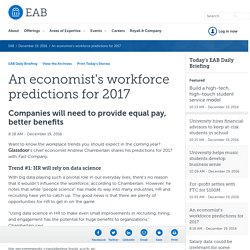 Glassdoor's chief economist Andrew Chamberlain shares his predictions for 2017 with Fast Company. Trend #1: HR will rely on data science With big data playing such a pivotal role in our everyday lives, there's no reason that it wouldn't influence the workforce, according to Chamberlain.

Human capital. Innovation. The 21 Most Valuable Career Skills Now. Customer service. Meetings. How May I Help You? The Genius of the Reciprocity Ring. There’s a very powerful exercise created by Wayne Baker at the University of Michigan and his wife Cheryl Baker at Humax Networks. Karen McNenny - Community is the CURE. Adam Grant. Humax - Home. Our Culture. How Google Works. The Next Dean of Stanford Business School.

The Next Dean of Stanford Business School To Provost John Etchemendy, professor Mary Barth, and members of the GSB search committee, It’s Time Presidents Stop Getting Away With Saying: “I don’t understand IT.” 9 Interesting TED Talks on Breaking Bad Habits & Forming Better Ones. Some habits, like brushing your teeth, you've done so many times that they feel automatic. In fact, it's probably true that every time you brush your teeth, you do so in pretty much the exact same way every time. Other habits, like exercising for even twenty minutes a day, can feel nearly impossible to pick up.

But why? Why are some habits so easy to fall into, while others are so darn hard? Virginia’s Public Colleges, Universities Gather to Share Innovations in Higher Education. Representatives from Virginia’s two- and four-year public colleges and universities met Wednesday in Charlottesville to exchange ideas and share best practices about educational innovations, administrative efficiencies and redesigning services for higher quality. “Leading Change through Innovation and Collaboration,” held at the University of Virginia’s John Paul Jones Arena, showcased 85 poster exhibits, several panel and roundtable discussions and a keynote address from William “Brit” Kirwan, chancellor of the University System of Maryland.

“We face daunting challenges requiring our institutions to be more innovative, flexible and nimble, while remaining true to the education and research mission that defines us,” Kirwan said. In the face of increasing demands for quality and productivity in higher education, the forum provided a space for institutions to share ideas and explore collaborative solutions to some of the most urgent challenges they face. About the Series. Building an Ecosystem of Higher Education Innovation  The confluence of cost and funding pressures, technology-enabled learning innovations and new paradigms of quality and teaching will continue to force higher education institutions to redefine their value. However, higher education institutions are unwilling to embrace new definitions of value and quality "as valid, even when they can see that customers increasingly prefer the new value offerings," notes a report from TIAA-CREF Institute.

At its basic level, the innovation process focuses on "doing new things and doing existing things better," according to the European Commission's Study on Innovation in Higher Education. The study notes, "The blockages for innovation can be found both at the institutional level, such as the lack of institutional support for innovative practices, and at national/regional, for example influenced by different degrees of autonomy of higher education institutions. Regulatory frameworks are also a crucial potential blockage to some innovative practices.