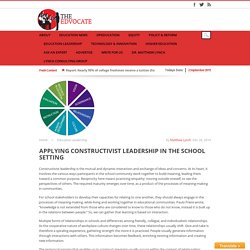 At its heart, it involves the various ways participants in the school community work together to build meaning, leading them toward a common purpose. Reciprocity here means practicing empathy; moving outside oneself, to see the perspectives of others. The required maturity emerges over time, as a product of the processes of meaning-making in communities. For school stakeholders to develop their capacities for relating to one another, they should always engage in the processes of meaning-making, while living and working together in educational communities. 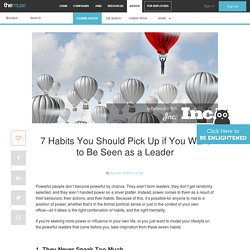 They aren’t born leaders, they don’t get randomly selected, and they aren’t handed power on a silver platter. Instead, power comes to them as a result of their behaviors, their actions, and their habits. Because of this, it’s possible for anyone to rise to a position of power, whether that’s in the formal political sense or just in the context of your own office—all it takes is the right combination of habits, and the right mentality.

If you’re seeking more power or influence in your own life, or you just want to model your lifestyle on the powerful leaders that came before you, take inspiration from these seven habits: 1. Abraham Lincoln was once quoted as saying that it’s “better to remain silent and be thought a fool than to speak out and remove all doubt.” 2. Rather than coming up with an idea or strategy and adhering to it rigidly, powerful people tend to be adaptable. 3. 4. 5. What's Leadership? a brief history of theories and concepts. Simon Sinek: Why good leaders make you feel safe. 7 Crippling Parenting Behaviors That Keep Children From Growing Into Leaders. 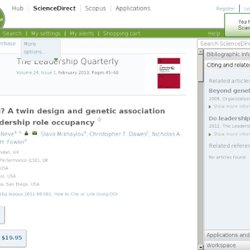 Keywords Leadership role occupancy; Twin design; Genetic association study Figures and tables from this article: Fig. 2. The heritability of leadership role occupancy. Table 1. Summary of model results. View Within Article Table 2. Family-based models of association between the Add Health genotypes and leadership role occupancy. Table 3. Relationship between leadership role occupancy and rs4950 genotype. 12 Most Beneficial People-Skills to Hit the Bullseye When You Have No Power. Success in companies requires working across the organization in collaboration with others throughout the globe. Purely hierarchical approaches continue to erode. As a result, staff must often hit the bullseye without the power or authority to call the shots. New grads entering the workforce in search of the hidden rules, seasoned professional grappling with the evolving non-hierarchical approach, and the growing contractor population suddenly thrust into new organizations — you all find yourselves in this position.

Fear not. You can hit the bullseye without authority or power if you embrace and hone these 12 most beneficial people skills. As The People-Skills Coach™, I have used these skills to quickly connect with clients and hit the bullseye for 23 years. 1. To accomplish goals and hit the bulls-eye with other people, turn the obstacles of diversity into advantages. Global Leadership: Adapting To The Cultural Jungle. By Manie Bosman No doubt that one of the most popular buzz-terms of our time is “global leadership” – I just did a Google search and got no less than 3 100 000 hits! 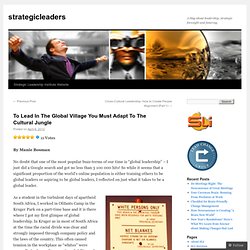 So while it seems that a significant proportion of the world’s online population is either training others to be global leaders or aspiring to be global leaders, I reflected on just what it takes to be a global leader. As a student in the turbulent days of apartheid South Africa, I worked in Olifants Camp in the Kruger Park on a part-time base and it is there where I got my first glimpse of global leadership. In Kruger as in most of South Africa at the time the racial divide was clear and strongly imposed through company policy and the laws of the country.

This often caused tension in the workplace as “whites” were generally in charge (irrespective of ability and skills) while “non-whites” were expected to fill the lower ranks and do what they were told without questioning the authority or competency of those in charge. 1.