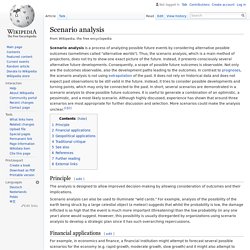 Thus, the scenario analysis, which is a main method of projections, does not try to show one exact picture of the future. Instead, it presents consciously several alternative future developments. Consequently, a scope of possible future outcomes is observable. Not only are the outcomes observable, also the development paths leading to the outcomes. In contrast to prognoses, the scenario analysis is not using extrapolation of the past. Principle[edit] The analysis is designed to allow improved decision-making by allowing consideration of outcomes and their implications. Scenario analysis can also be used to illuminate "wild cards. " Financial applications[edit] Depending on the complexity of the problem scenario analysis can be a demanding exercise. Geopolitical applications[edit] Traditional critique[edit] See also[edit] References[edit] ORAPAPA - Decision-Making Skills Training From MindTools.com.

A Checklist for Making Better Decisions © iStockphototommasolizzul How often have you seen people make a really bad decision? 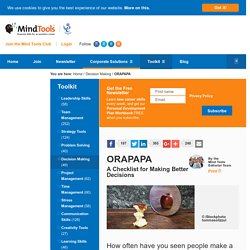 Perhaps they evaluated it from a financial perspective, but didn't think about how people would react to it. Maybe they got excited about the potential of the idea, but had not considered the risks. PEST Analysis - Strategy Tools From MindTools.com. Identifying "Big Picture" Opportunities and Threats (Also Known as PESTLE, PESTEL, PESTLIED, STEEPLE, SLEPT and LONGPESTLE) Learn how to use PEST Analysis to identify the threats and opportunities in your business environment. 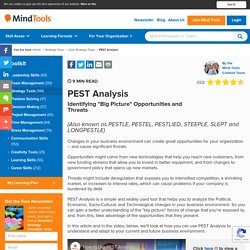 Changes in your business environment can create great opportunities for your organization – and cause significant threats. For example, opportunities can come from new technologies that help you reach new customers, from new funding streams that allow you to invest in better equipment, and from changed government policies that open up new markets. Threats can include deregulation that exposes you to intensified competition; a shrinking market; or increases to interest rates, which can cause problems if your company is burdened by debt. PEST Analysis is a simple and widely used tool that helps you analyze the Political, Economic, Socio-Cultural, and Technological changes in your business environment.

About the Tool PEST Analysis is useful for four main reasons: Note: PEST Analysis - Strategy Tools From MindTools.com. Susan Colantuono: The career advice you probably didn’t get. How to be a great leader. Sheikh Mohammed bin Rashid explains new ministerial posts in open letter. Sheikh Mohammed bin Rashid, Vice President and Ruler of Dubai, has elaborated on the significance of appointing ministers of state for happiness, tolerance, the future and youth earlier this month, in what was deemed the largest overhaul of the federal Government in its history. 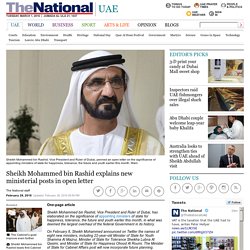 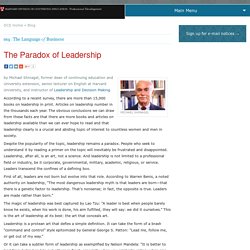 Made to stick. Decoding leadership: What really matters. Telling CEOs these days that leadership drives performance is a bit like saying that oxygen is necessary to breathe. 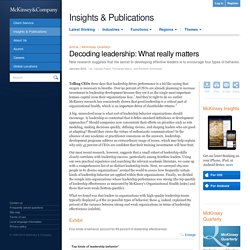 Over 90 percent of CEOs are already planning to increase investment in leadership development because they see it as the single most important human-capital issue their organizations face. The Four Truths of the Storyteller. I’m in the business of creating compelling stories. 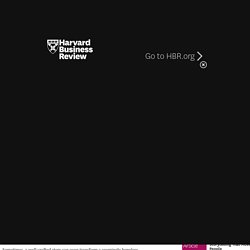 As a filmmaker, I need to understand how stories touch audiences—why one story is an instantly appealing box office success while another fails miserably to connect. I’ve been fortunate enough to work with some of the world’s most talented storytellers—gifted directors, novelists, screenwriters, actors, and other producers—and from them I’ve gleaned insights into the alchemy of great stories. Make no mistake, a hit movie is still an elusive target, and I’ve had my share of flops. The Four Truths of the Storyteller by Peter Guber (article), Harvard Business Review Dec 2007 page 53. The 10 Most Important Work Skills in 2020. 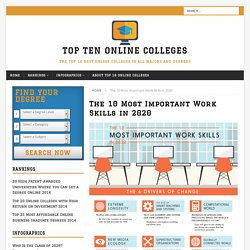 <a href=" src=" alt="Important Work Skills for 2020" width="500" border="0" /></a><br />Source: <a href=" Dysfunctional group. Leadership and Personal Development. Etherpad. Trello. Appendix A: Debriefing the Activity. One of the most important skills that a facilitator can offer the group is the ability to help the group learn from and through the activity, and this is done through a “debriefing” process. 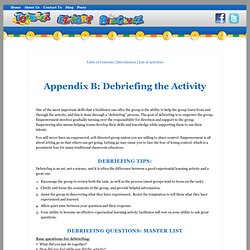 The goal of debriefing is to empower the group. Empowerment involves gradually turning over the responsibility for direction and support to the group. Empowering also means helping teams develop their skills and knowledge while supporting them to use their talents. Www.bankofideas.com.au/Newsletter/July10/downloads/GB-Team-Building. Annie McKee Discusses Toxic Bosses.