Rome resident raises alarm after migrant SOS phone call. Photo captures elderly woman’s kind gesture to aggressive man on train. [Facebook/Ehab Taha] A woman’s kind-hearted gesture made a world of a difference to a man who was “being aggressive” on a train. 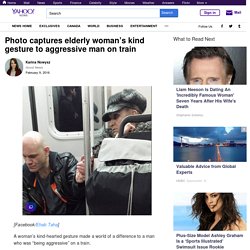 Facebook user Ehab Taha captured the moment when the 70-year-old woman reached out to hold the hand of the man, who was sitting on the floor of the train. The photo of the two has had more than 27,000 shares since Taha posted it to his page. According to Taha, who was riding the Sky Train in Vancouver, B.C., the man was cursing and shouting, while everyone else looked on scared. Taha writes how the man may have been struggling with drug abuse or mental health issues. Instead of turning away, the elderly woman reached out her hand and “tightly gripped his hand until he calmed down,” Taha writes. “I’m a mother and he needed someone to touch,” she told Taha after the incident, and then started to cry. Taha told CTV News that when the man arrived at his stop, he got up and said, “Thanks, grandma,” before getting off. 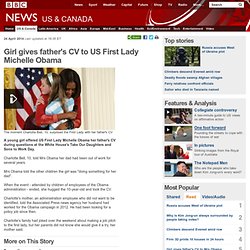 Charlotte Bell, 10, told Mrs Obama her dad had been out of work for several years. Light. A triangular prism dispersing a beam of white light. 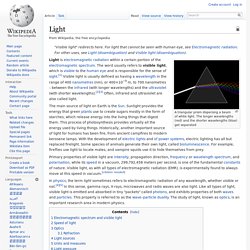 The longer wavelengths (red) and the shorter wavelengths (blue) get separated Light is electromagnetic radiation within a certain portion of the electromagnetic spectrum. The word usually refers to visible light, which is visible to the human eye and is responsible for the sense of sight.[1] Visible light is usually defined as having a wavelength in the range of 400 nanometres (nm), or 400×10−9 m, to 700 nanometres – between the infrared (with longer wavelengths) and the ultraviolet (with shorter wavelengths).[2][3] Often, infrared and ultraviolet are also called light.

The main source of light on Earth is the Sun. Sunlight provides the energy that green plants use to create sugars mostly in the form of starches, which release energy into the living things that digest them. Electromagnetic spectrum and visible light. Electromagnetic spectrum. Wavelength of light. Is the US in denial over its $14tn debt? 27 June 2011Last updated at 10:16 By Justin Webb BBC News Is America in denial about the extent of its financial problems, and therefore incapable of dealing with the gravest crisis the country has ever faced?

This is a story of debt, delusion and - potentially - disaster. For America and, if you happen to think that American influence is broadly a good thing, for the world. The debt and the delusion are both all-American: $14 trillion (£8.75tn) of debt has been amassed and there is no cogent plan to reduce it. The figure is impossible to comprehend: easier to focus on the fact that it grows at $40,000 (£25,000) a second. The economist Jeffrey Sachs, director of Columbia University's Earth Institute, is no rabid fiscal conservative but on the debt he is a hawk: Continue reading the main story “Start Quote The debt is not a financial problem, it is a political problem” End QuoteDavid FrumFormer speechwriter to George W Bush "I'm worried. The author and economist Diane Coyle agrees. Take Alaska. Malcolm Gladwell: Choice, happiness and spaghetti sauce.

Economic View on Spaghetti Sauce - Research Papers - Angelhula. Ted Talks by Malcolm Gladwell on Spaghetti Sauce in term of Economic perspective Gladwell talks about Howard Moskowitz, who was the food industry guru and most famous for re-inventing spaghetti sauce. 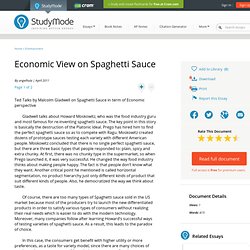 The key point in this story is basically the destruction of the Platonic Ideal. Prego has hired him to find the perfect spaghetti sauce so as to compete with Ragu. Moskowitz created dozens of prototype sauces testing each variety with different American people. Moskowitz concluded that there is no single perfect spaghetti sauce, but there are three basic types that people responded to: plain, spicy and extra chunky.