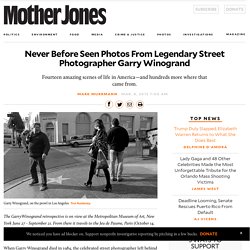 Ted Pushinsky The GarryWinogrand retrospective is on view at the Metropolitan Museum of Art, New York June 27 - September 21. From there it travels to the Jeu de Paume, Paris (October 14, 2014 through January 25, 2015); and the Fundacion MAPFRE, Madrid (March 3 through May 10, 2015). When Garry Winogrand died in 1984, the celebrated street photographer left behind close to 6,500 rolls of undeveloped film. Now his old friend and student Leo Rubinfien, along with Erin O'Toole, a curator at San Francisco's Museum of Modern Art, and Sarah Greenough, senior curator of photographs at the National Gallery of Art, have mined this trove to produce the first major Winogrand retrospective in almost three decades.

The Yes Men Are Revolting. Deficit Hawks and Hypocrites. They should be told to go away. 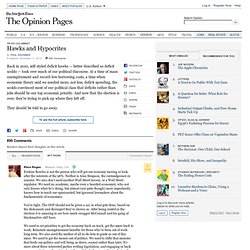 It’s not just the fact that the deficit scolds have been wrong about everything so far. Recent events have also demonstrated clearly what was already apparent to careful observers: the deficit-scold movement was never really about the deficit. Instead, it was about using deficit fears to shred the social safety net.

And letting that happen wouldn’t just be bad policy; it would be a betrayal of the Americans who just re-elected a health-reformer president and voted in some of the most progressive senators ever. About the hypocrisy of the hawks: as I said, it has been evident for years. And how did the deficit scolds react when Mitt Romney served up similar flimflam, with Mr. And then there’s the matter of the “fiscal cliff.” Contrary to the way it’s often portrayed, the looming prospect of spending cuts and tax increases isn’t a fiscal crisis. 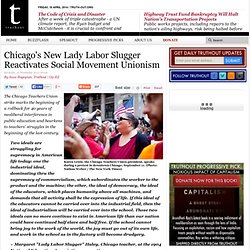 (Photo: Nathan Weber / The New York Times)The Chicago Teachers Union strike marks the beginning of a rollback for 40 years of neoliberal interference in public education and hearkens to teachers' struggles in the beginning of the last century. Two ideals are struggling for supremacy in American life today: one the industrial ideal, dominating thru the supremacy of commercialism, which subordinates the worker to the product and the machine; the other, the ideal of democracy, the ideal of the educators, which places humanity above all machines, and demands that all activity shall be the expression of life. If this ideal of the educators cannot be carried over into the industrial field, then the ideal of industrialism will be carried over into the school. Those two ideals can no more continue to exist in American life than our nation could have continued half slave and half free.

How does the idea of p2p and the commons differ from the socialist tradition? In the article for the Argentinian national daily “Pagina 12″, journalist Mariano Blejman writes that I equate open hardware with socialism. and this is also the message that is being retweeted. 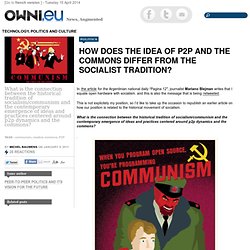 This is not explicitely my position, so I’d like to take up the occasion to republish an earlier article on how our position is related to the historical movement of socialism. What is the connection between the historical tradition of socialism/communism and the contemporary emergence of ideas and practices centered around p2p dynamics and the commons? Let’s first tackle our understanding and interpretation of communism. To me it is basically the idea, probably born at the same time as post-tribal class-based society, that an alternative human arrangement based on equal relationships and without the inheritance of wealth and privilege is possible. It is something that appears again and again in human history as an expression of those that are not privileged in the existing social arrangements. 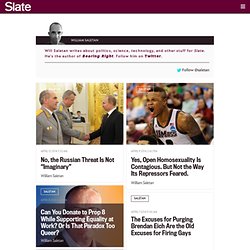