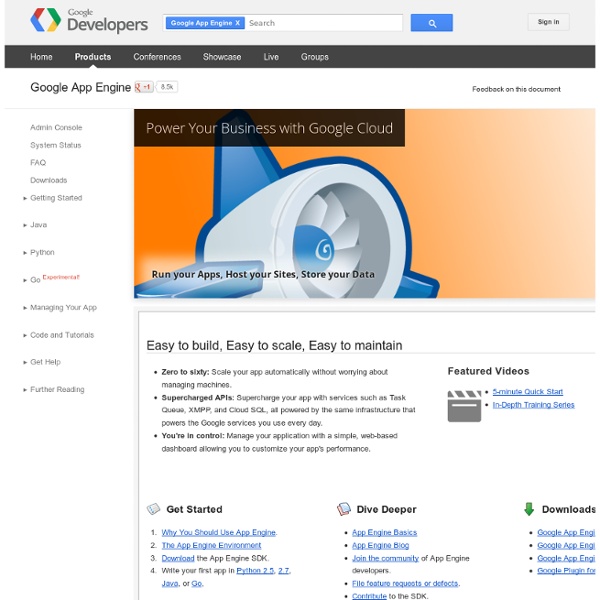 Obsolete Microkernel Dooms Mac OS X to Lag Linux in Performance Disagreements exist about whether or not microkernels are good. It's easy to get the impression they're good because they were proposed as a refinement after monolithic kernels. Microkernels are mostly discredited now, however, because they have performance problems, and the benefits originally promised are a fantasy. The microkernel zealot believes that several cooperating system processes should take over the monolithic kernel's traditional jobs. These several system processes are isolated from each other with memory protection, and this is the supposed benefit.

Why sign in to Chrome - Google Chrome Help When you're signed in to Chrome on different devices, you can sync bookmarks, history, passwords, and other settings across them. Learn how to sign in to Chrome. To help keep your data private: Only sign in to Chrome from trusted devices. Don't sign in to Chrome on a public or shared device. Choose what to sync & how to protect it Cloud Storage Save costs without sacrificing performance by storing data across different storage classes. You can start with a class that matches your current use, then reconfigure for cost savings. Standard Storage: Good for “hot” data that’s accessed frequently, including websites, streaming videos, and mobile apps. Nearline Storage: Low cost. Good for data that can be stored for at least 30 days, including data backup and long-tail multimedia content.

MindMup - online mindmaps Capture ideas at the speed of thought – using a mind map maker designed to help you focus on your ideas and remove all the distractions while mindmapping. Create unlimited mind maps for free, and store them in the cloud. Your mind maps are available everywhere, instantly, from any device. Brainstorm, create presentations and document outlines with mind maps, and publish your ideas online and to social networks.

24C3: Inside the Mac OS X Kernel Many buzzwords are associated with Mac OS X: Mach kernel, microkernel, FreeBSD kernel, C++, 64 bit, UNIX... and while all of these apply in some way, "XNU", the Mac OS X kernel is neither Mach, nor FreeBSD-based, it's not a microkernel, it's not written in C++ and it's not 64 bit - but it is UNIX... but just since recently. This talk intends to clear up the confusion by presenting details of the Mac OS X kernel architecture, its components Mach, BSD and I/O-Kit, what's so different and special about this design, and what the special strengths of it are. The talk first illustrates the history behind BSD and Mach, how NEXT combined these technologies in the 1980s, and how Apple extended them in the late 1990 after buying NEXT.

Fusion Tables - Gather, visualize, and share data tables online Bust your data out of its silo! Get more from data with Fusion Tables. Fusion Tables is an experimental data visualization web application to gather, visualize, and share data tables. Category:Free package management systems This is a category of articles relating to software which can be freely used, copied, studied, modified, and redistributed by everyone that obtains a copy: "free software" or "open source software". Typically, this means software which is distributed with a free software license, and whose source code is available to anyone who receives a copy of the software. Subcategories This category has only the following subcategory. Pages in category "Free package management systems" The following 39 pages are in this category, out of 39 total.

Latitude Google Latitude was retired on August 9th, 2013. Products retired include Google Latitude in Google Maps for Android, Latitude for iPhone, the Latitude API, the public badge, the iGoogle Gadget, and the Latitude website at maps.google.com/latitude. What does this mean for me? You are no longer able to share your location using Latitude. We haven’t included Latitude as a feature in the latest version of Google Maps for mobile on Android and you can no longer see Latitude for iPhone on the App Store. Kindle 3.X updater for Kindle 2 and Kindle DX released After a month and a half of testing thanks to the community of MobileRead, I can finally release the first stable version of the Kindle 3.X software updater (help me come up with a better name, please). If you haven’t read my last few Kindle-related posts (read them if you want more technical details of this script), you should know that this allows you to use all the cool new features of the Kindle 3 on a K2 or DX device. Installation is easy and is only three steps: 1) Use “prepare-kindle” script on old Kindle to back up and flash recovery kernel, 2) Copy generated files to Kindle 3 along with “create-updater” script and run it, 3) Copy generated update package back to old Kindle and restart. If that sounds confusing, don’t worry, the readme contains very detailed directions and even how to recover in case anything goes wrong. Here it is.

Stopping the Gears Last February, we let you know we were shifting our focus from Gears to HTML5. Over the last year or so, we’ve been working closely with other browser vendors and standards bodies to help define and standardize HTML5 features across browsers, and we’ve worked hard to improve these HTML5 capabilities in Chrome: We implemented support for application caches, which are a great replacement for Gears’ offline features. App caches are already being used by web apps like the NYTimes app in the Chrome Web Store.

Eclipse IDE Tutorial Copyright © 2007, 2008, 2009, 2010, 2011, 2012, 2013, 2014, 2015 vogella GmbH Eclipse Java IDE This tutorial describes the usage of Eclipse as a Java IDE. It describes the installation of Eclipse, the creation of Java programs and tips for using Eclipse. Map Maker Google Map Maker officially closed on March 31, 2017, and many of its features are being integrated into Google Maps. Since 2008, the Google Map Maker community has edited and moderated millions of features to improve the Google Maps experience. To make it easier for all Google Maps users to contribute changes to the map, we’ve started to graduate functionality from Map Maker to Google Maps on both desktop and mobile. Key editing features currently available in Google Maps include:

Notebook As of July 2012, Google Notebook has shut down and all Notebook data should now be in Google Docs. As previously announced, in most cases we were able to automatically export the Notebook data, so please visit Google Docs. Also please update any bookmarks or links to Notebook so that they point to Docs instead. Here are answers to some questions about this transition.