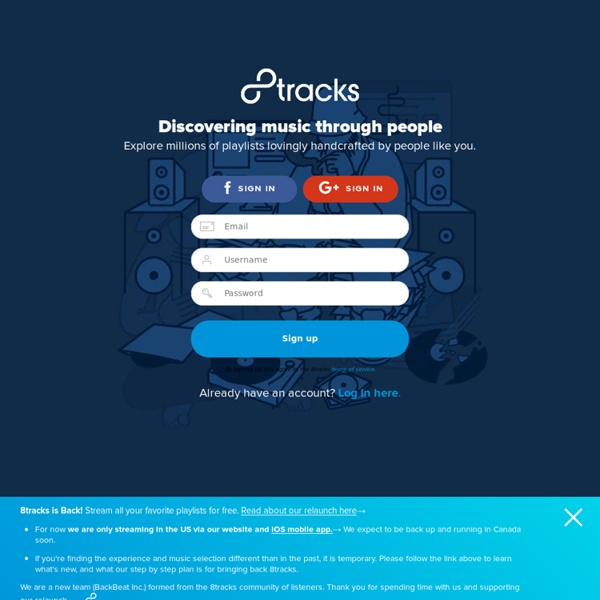 How To Access THE HIDDEN WIKI (Deep web, secret Internet) (Some of this was copied from BB.com, I'm just bringing it to TBN) For those who don't know, the deep web represents a gargantuan part of the internet which is not accessible through regular searches via google or other search engines. Searching on the Internet today can be compared to dragging a net across the surface of the ocean. While a great deal may be caught in the net, there is still a wealth of information that is deep, and therefore, missed. The Ultimate Road Trip Playlist — 50 Best Road Trip Songs  No road trip is complete without a playlist of songs that capture the spirit of traveling on the open road. So we’ve compiled a list of the 50 best road trip songs . In order to make this be-all end-all totally definitive list that all other lists look up to, the songs had to meet the following criteria:

50 Things Everyone Should Know How To Do Self-reliance is a vital key to living a healthy, productive life. To be self-reliant one must master a basic set of skills, more or less making them a jack of all trades. Contrary to what you may have learned in school, a jack of all trades is far more equipped to deal with life than a specialized master of only one. While not totally comprehensive, here is a list of 50 things everyone should know how to do. Edit: Do you like this post image? Top 10 Free Ways To Discover New Music Online Bored with your music and want to discover some new bands or singers? There are two main ways you can do that online. You can use services which create music maps, allowing you to explore artists similar in genre to the artists you already listen to. Or you can use music blogs and websites that showcase independent or up-and-coming artists, whether the music is being reviewed, or posted by the musicians themselves.

The 3 Best Free Classical Music Download Sites Classical music can be an ambiguous term. It is widely used to identify the Classical period, which approximately covers the years from 1750 to 1820. On the other hand, Western art music from 1000 CE to the present is also called classical music. The following is a list of the best classical music download sites that provide a mix of both, i.e. classical music ranging from Baroque, Classical, and Romantic periods and via the 20th century to Contemporary classical music of our time.

37 Ways to Tie a Scarf Hello there! Welcome to The Knot Library. Are you ready to knot, twist, tie, tuck, loop, braid, fold, and fluff with Scarves Dot Net? We compiled over 50 (and counting!) different ways to tie a scarf, so chances are we have a new knot or two for you! How to Use Scarves.net Playlist - The Perfect House Party Playlist: Pre-Drunk Rock To Hip Hop The name pretty much says it all. If you have a house party, this is perfect. You start the list around 9-10ish before people get any spirits in them and the party is bustling. The Music transitions from rock and music you can talk behind quickly to more energetic classic and modern rock.

Guide to flirting Why do we flirt? Flirting is much more than just a bit of fun: it is a universal and essential aspect of human interaction. Anthropological research shows that flirting is to be found, in some form, in all cultures and societies around the world. Will 'Born This Way' Be the Most Important Album of Lady Gaga's Career? Lady Gaga is at once the biggest pop star in the world and not really a pop star at all -- at least not in the conventional sense. In myriad ways, she's unlike Britney Spears, who despite a recent string of hits and a well-received album seems about as removed from her own career as she can be while still being physically in the room with a mic strapped to her head. And she's a totally different animal than real-life friends Katy Perry and Rihanna, hit-makers who share an affinity for letting big-name producers and songwriters do their artistic heavy-lifting. Like her above-mentioned pop diva counterparts, Gaga works with top-notch producers to swaddle her songs in dance floor-ready beats, but her skills as a lyricist set her apart from the flock. "People are expecting a lot," Billboard editor M.

Rogue's Gallery: Pirate Ballads, Sea Songs, and Chanteys Track listing[edit] Disc One[edit] Disc Two[edit] Producers[edit] Son of Rogues Gallery[edit] How to Make Cinemagraphs — Still Photos that Move Like Movies Yup, that picture moves. Nope, you’re not going crazy! ‘Cause who said photos can only feature “still” life? Inspired by the moving pictures created by photographer and motion designer duo Jamie Beck and Kevin Burg, we set out to make the magic happen. Make your pictures move like ours did with a some Photoshop magic!

20 fantastic ways to find new music that you like (no Last.fm & Pandora inside) OK, everybody knows that Last.fm & Pandora are great services, but there are a lot of other tools that can help us to find new cool music. Some of them just expose daily musical goodies, others make recommendations based on your very own preferences, and others take the web interactivity ever further. Explore the best 20 ways to discover new music in a web 2.0 world. Live music discovery Wonderwheel Two-Ingredient Banana Peanut Butter Ice Cream Recipe Brown spotted bananas were sitting on our counter, staring me down. I tried to ignore them, but they kept haunting me. It seems like I can never eat bananas fast enough.

7 Alternatives to Pandora and Last.FM Whether you are annoyed by the ads on Pandora, the limited number of skips, or the abyss of cruel 30-second song teasers from Last.FM, many online listeners are growing weary of mainstream methods of hearing new music. While the Pandora algorithm is strong, and the Last.FM related artists tool is pretty useful, don’t fool yourself in to thinking that there aren’t other great ways to expose yourself to new music in the depths of cyberspace. Here are 7 alternatives to Pandora and Last.FM that will infuse your day with an uninterrupted stream of music that large record companies haven’t managed to squash under their thumbs yet. StumbleAudio StumbleAudio has a killer recommendation engine that works better for me than Pandora’s. Instead of “genomes”, StumbleAudio uses listeners’ favoritism as well as buying pattern data from online music stores to make suggestions.

I love 8tracks. Its by far the best thing I have ever come across. For music lovers like myself.. this is truly something worth praising by nhunter320 Mar 28

Man ya gotta love 8tracks. "Finally, a place for alll the dozens and dozens of playlists that are just lying around collecting digital dust in my iTunes." by carlosbell Feb 12