Rebuilding the HoloLens scanning effect with RoomAlive Toolkit. The initial video that explains the HoloLens to the world contains a small clip that visualizes how it can see the environment. 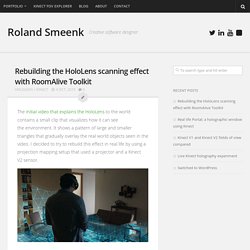 It shows a pattern of large and smaller triangles that gradually overlay the real world objects seen in the video. I decided to try to rebuild this effect in real life by using a projection mapping setup that used a projector and a Kinect V2 sensor. Prototyping in Shadertoy First I experimented with the idea by prototyping a pixel shader in Shadertoy. Shadertoy is an online tool that allows developers to prototype, experiment, test and share pixel shaders by using WebGL.

Hack Raspberry Pi – How To Build Apps In C#, WinForms and ASP.NET Using Mono In Pi. Recently I was doing a bit of R&D related to finding a viable, low cost platform for client nodes. 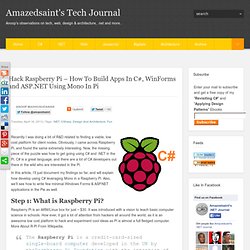 Obviously, I came across Raspberry Pi, and found the same extremely interesting. Now, the missing piece of the puzzle was how to get going using C# and .NET in the Pi. C# is a great language, and there are a lot of C# developers out there in the wild who are interested in the Pi. In this article, I’ll just document my findings so far, and will explain how develop using C# leveraging Mono in a Raspberry Pi. Also, we’ll see how to write few minimal Windows Forms & ASP.NET applications in the Pie as well.

Arduino. ZWave. .NET Gadgeteer. About .NET Gadgeteer .NET Gadgeteer was created by researchers at Microsoft as an internal prototyping tool, but because of external interest, particualrly from educators and hobbyists, we turned it into open source software which now has a vibrant hardware ecosystem from multiple manufacturers. 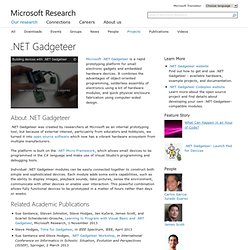 The platform is built on the .NET Micro Framework, which allows small devices to be programmed in the C# language and make use of Visual Studio’s programming and debugging tools. Individual .NET Gadgeteer modules can be easily connected together to construct both simple and sophisticated devices. Each module adds some extra capabilities, such as the ability to display images, playback sounds, take pictures, sense the environment, communicate with other devices or enable user interaction. This powerful combination allows fully functional devices to be prototyped in a matter of hours rather than days or weeks. Photos. Home - Gadgeteer. A new way to make sophisticated devices Even someone with little or no electronics background can build devices made up of components like sensors, lights, switches, displays, communications modules, motor controllers, and much more. 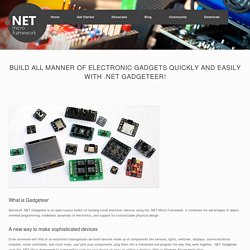 Just pick your components, plug them into a mainboard and program the way they work together. .NET Gadgeteer uses the .NET Micro Framework to make writing code for your device as easy as writing a desktop, Web or Windows Phone application. An open source and open hardware community project If you're building projects with .NET Gadgeteer, you'll find inspiration and product information on this site.

If you're interested in building .NET Gadgeteer hardware, you can find hardware interface specifications and core libraries at A variety of hardware vendors are building components for .NET Gadgeteer, so you’ll have a huge assortment of modules to choose from. AGENT - The World's Smartest Watch.